University of Washington Station brings it all together

More than a light rail station, Sound Transit’s University of Washington Station, designed by LMN Architects, adds multiple facets to the urban fabric at the intersection of Montlake Boulevard and Pacific Street.

Knitting together transportation modalities from bike to bus to pedestrians to trains, the multi-disciplinary design of the 156,000-square-foot station creates a unified mobility solution at a problematic street intersection, one of the busiest in Seattle, and provides a unique gateway to the UW campus through its above and below-grade experiences.

The project includes a train platform 100 feet underground, accessed by escalators and elevators from a two-level glass entrance structure at grade. Along the way, users pass through a tall, vertical circulation chamber featuring “Subterraneum,” an art installation by Leo Saul Berk, who worked with LMN to blend architecture and sculpture in expressing the geological layers of soil surrounding the station walls.

The station’s new bicycle and pedestrian bridge — with stairs, escalators and ramps connecting both levels of the entrance structure — curves gently as it spans over Montlake Boulevard to land on the university campus. 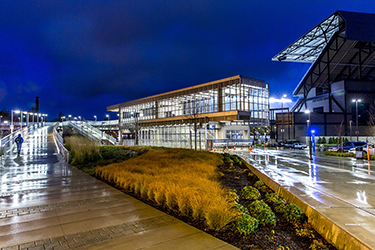 Each element of the project is carefully considered as a component of a larger whole, set within a complex web of uses that encompasses the campus, the surrounding neighborhoods, and important university destinations such as Husky Stadium, Alaska Airlines Arena and the UW Medical Center.

“LMN’s work at the University of Washington Station beautifully and intricately navigates an almost unbelievably complex urban node,” says Rebecca Barnes, university architect and associate vice provost for campus and capital planning at the University of Washington. “The outcome is a great architectural and urban design achievement borne of many acts of imaginative and insightful civic leadership.”

Between the surface and the train platform 100 feet below, circulation paths follow an orchestrated sequence of moments, constantly orienting users to the station’s overall volume, structure and internal flow.

Visual connections between levels create a strong sense of place. The glass entrance structure frames views of the surrounding context, including Lake Washington and the Cascade Mountains. The transparency also serves as a light well, allowing daylight to reach down to the mezzanine level.

Each piece works together and builds up the climactic experience of “Subterraneum” in the central circulation chamber.

Mechanical infrastructure is largely invisible from these public spaces.

Concealed behind the scenes, an emergency smoke ventilation system, track crossover area and associated maintenance spaces are nearly as large by volume as the circulation areas in the station’s below-grade footprint.

Two elliptical-shaped ventilation towers emerge above-grade, anchoring each end of the structure, and fade from view through the strategic use of perforated screens. The towers serve the emergency smoke ventilation system for the entire tunnel, along with fans at every station on the line that work in tandem to move air and smoke in the event of an emergency. 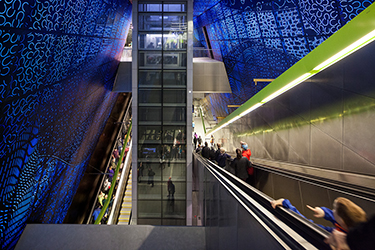 At the heart of the station experience, the escalators and glass elevator pass through a 55-foot-high central chamber, one of the tallest interior volumes in the city.

Working with artist Leo Saul Berk, a UW graduate known for exploring subterranean themes in mixed-media sculpture and installations, “Subterraneum” blends sculpture and architecture in exploring the opportunities of the underground condition. Backlit, perforated metal panels clad the chamber walls, displaying luminous patterns representing geological layers, while suffusing the space with ambient light. The vertical angle of the chamber walls changes along the long axis, creating a twisting volume that offers varying views of the artwork from different vantage points throughout the station.

Four escalators and two glass elevator columns spill through this soaring space, providing a dynamic experience of the art while riding up or down. Various vantage points at the mezzanine and at the bottom of the chamber offer a chance to take in the views, while observing people coming and going to the train platform.

UW Station is the terminus of Sound Transit’s University Link Extension, the first part of the regional light rail system to open north of downtown Seattle. When joined with the Northgate Link planned to open in 2021, the line will comprise 7.45 miles of twin-bored tunnels, followed by 1 mile of elevated track as it approaches the Northgate Transit Center.

University Link provides unprecedented access between downtown and the University of Washington with a travel time of 8 minutes, as opposed to 15-45 minutes by bus or car. The line connects to all points in the current and planned Sound Transit network including the existing Central Link running between downtown and SeaTac Airport, and future links throughout King, Snohomish and Pierce counties opening over a 20-year time frame.

LMN’s design work encompasses 13 stations throughout the system, including the design of stations in the Bellevue and Redmond segments of East Link, and stations for Lynnwood Link, both opening in 2023.

The 400-foot-long bike and pedestrian bridge over Montlake Boulevard pushes the limits of the use of post-tensioned concrete in structural engineering. The bridge is a collaborative effort between Sound Transit and the University of Washington, with architects, landscape architects, structural engineers and contractors on each side taking part in its design and execution.

In elevation, the thinness and narrowness of the bridge section made possible by post-tensioning allows a gentle arch for bicycles and pedestrians, while still leaving roadway clearance for buses. Two compound curves create separate lanes for bikes and pedestrians within a 32-foot width, with the two lanes splitting apart at each end.

Where the bridge meets the above-grade station entrance, pedestrians can enter the station directly on the upper level by elevator or escalator, or use a grand staircase to access the station’s exterior plaza shared with Husky Stadium.

The bicycle lane continues separately in a gradual ramp to the street level, completing a long-desired connection between the Burke-Gilman Trail and the state Route 520 floating bridge.

UW Station and its associated public spaces connect a complex of major campus elements and urban pathways, making a civic-centered contribution to the importance of rail transit to the campus community. The station is expected to serve 24,000 transit riders per day, in addition to thousands more bicycles and pedestrians using the bridge, together forming a critical new component of Seattle’s transportation network.

The architectural design of the station creates an inspiring public mixing zone that celebrates multiple transportation modes with a many-layered sense of movement and place.

Mark Reddington, FAIA, is a partner at LMN Architects in Seattle. He is a leader in the design of public places including the Washington State Convention Center Addition, Marion Oliver McCaw Hall, Benaroya Hall and UW Station.