Rendering courtesy GGLO [enlarge]
The Sparc will have four wood-frame apartment buildings and this nine-story building made with light-gauge steel.

When the Sparc apartment in Bellevue is finished this summer, the 104-unit building will have a contemporary skin that disguises a new hybrid structural engineering system.

Topping-off next week, the nine-story building is getting a lot of attention from local developers, architects and contractors, according to Cary Kopczynski & Co. marketing and visual design specialist Mari Al-Khazraji. “We are getting many requests for site visits, and some developers have even flown from California to check out how light-gauge is being implemented at the site.”

While light-gauge steel construction has been around for years as a substitute for wood-framed low-rise apartment buildings and single-family homes, the Sparc building uses a modified version of traditional light-gauge steel design that allows the developer, Security Properties, to build a few floors higher than a wood-framed building and have greater floor space and ceiling heights.

The Sparc is a multi-building development that is part of the 16-block Spring District in Bellevue, which is an urban mixed-use neighborhood with residential, retail and office space being built in three phases. 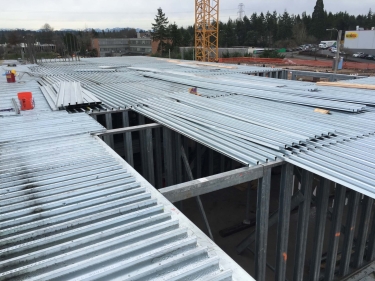 Photo from Cary Kopczynski & Co. [enlarge]
Metal decking is assembled for a floor of the Sparc building being made with light-gauge steel. 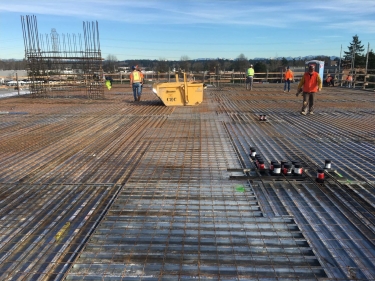 The Sparc will have five apartment buildings. But because it is taller than the adjacent apartments, the nine-story light-gauge steel building will be the only one of its kind in the development.

“The light-gauge hybrid system we have used is in the sweet spot for buildings between six to 10 stories,” said Cary Kopczynski & Co. Principal Joe Ferzli. “A lot of developers are really interested in knowing more about it.”

Ferzli said the Cary Kopczynski & Co. design uses light-gauge steel framing in a manner that other designers and developers have overlooked for commercial buildings.

“Our application of light-gauge framing has been used in limited applications on the West Coast due to a misunderstanding of the system limitations,” Ferzli said. “The concept of using the concrete floor on metal deck, without joists, and the concrete shear walls to carry the lateral seismic loads makes this system competitive for residential and hotel applications up to 10 stories.”

Traditionally, light-gauge steel is used for bearing walls and floors. In this method, shear walls use strap bracing, Sure-Board and hold-down anchors.

On the Sparc project, Ferzli altered that formula by calling for concrete shear walls and a more efficient flooring system. The flooring system forgoes the traditional use of floor joists and instead uses a metal deck topped with concrete.

“This simplified hybrid system — where gravity forces are resisted by light-gauge steel and seismic forces resisted by concrete — makes this construction system cost effective,” he said.

The concrete shear walls have a higher lateral capacity than light-gauge steel shear walls. “We reduced the amount of shear wall requirement to a handful of walls,” he said.

By eliminating the need for floor joists, the jumbo floor deck spans between bearing walls are up to 20 feet — reducing the floor depth and increase ceiling heights. The total floor thickness is about 5 inches, he said, compared with the traditional wood-flooring deck thickness of about 14 inches.

In addition, the system saves on labor costs because subcontractors can navigate easily through the structural system by reducing the number of light-gauge steel shear walls, he said.

He said the structural system for the Cameron consists of a configuration similar to the Sparc, using concrete shear walls to resist lateral loads and light-gauge steel bearing walls for gravity support.

But, instead of long-span metal deck and concrete for the floor structure, KPFF used a Hambro floor, which provides a composite slab and steel joist system spanning from the corridor walls to the exterior.

The Hambro system, made by Canam Buildings of Saint-Georges, Quebec, allows contractors to pour concrete flooring on more than one level at a time.

The framing walls were prefabricated off-site, improving the construction schedule, he said. The apartments are one of the few light-gauge steel commercial projects in Portland.

The project was completed early this year, and the general contractor was Bremik Construction.

“We see light-gauge construction more in Seattle than Portland,” Richards said, “but more and more people are looking into this type of construction because people are always looking for ways to save money and provide more economical structural systems in buildings.

“It's another tool to look at how a project can pencil out,” he said.

Ferzli said Kopczynski & Co. will use the company's hybrid light-gauge steel design on three upcoming projects in Denver and possibly a few more in the Midwest.

Ferzli said he believes the hybrid design will catch on for mid-rise buildings because the International Building Code limits wood-framed buildings to five stories, and concrete buildings are more expensive.

“The concept of using the concrete floor on metal deck and concrete shear walls to carry the lateral seismic loads and use a jumbo deck without joist for the floor makes this system competitive for residential/hotel applications up to 10 stories,” he said.

The general contractor on the Sparc is Walsh Construction Co.