Next for drones? Helping design, build and sell projects 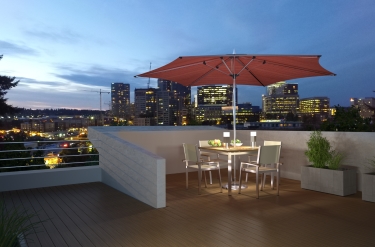 Image by FWD3D [enlarge]
A drone photo of the view from the future roof of the Metric Townhomes in Bellevue provides the backdrop to this rendering.

In 2002, Frank Woll started using missile-tracking lasers modified to read complex surfaces to help owners get the exact measurements needed to add elements like sky-lounges and pilothouses to yachts.

Woll has for almost two decades been involved in the industry, including the design of mega yachts and the development of a line of yachts for a Chinese company called Evolution Yachts Asia.

Over the years, his Seattle firm, Frank Woll Designs, also got into residential design.

Recently, he teamed with Mike Bratter, formerly of Aerial Scouts, in a Seattle-based firm called FWD3D.

It uses emerging technologies to capture 3-D data for use in the design, construction and marketing of real estate projects.

It has started using cameras mounted on drones — small remote-controlled aircraft — to take photos and video that architects can use in designing, contractors can use in building and inspecting, and developers can use in selling real estate projects.

Next it plans to give people virtual walk-throughs of those projects, much like one gets when viewing a hotel room online, but with the ability to move about and see the space from different points of view.

Bratter said drone imagery of views from each floor or unit of a building can be used in the walk-throughs, giving potential renters or buyers a better feel what for the space will be like to live or work in. They can use a computer, at home or at a sales office, to “click through” specific areas, he said.

Drone imagery also could be incorporated in packets presented at Seattle design review meetings for future developments, he said.

Woll started using drones about a year and a half ago for a townhouse development in Bellevue. The developer used a shot taken by a drone of the view from the future rooftop and incorporated it into a rendering to sell the project, which is called Metric Townhomes.

There's lots of competition in the local market to fill and sell apartments, condos and commercial spaces, Woll said. “The development sales team will use anything at their disposal to show how their building is more unique,” he said.

Woll had been using the Google Earth Pro module to fly simulation paths to get photos of a site. But he said the resolution is low, the closer you get to the ground the harder it is to place the camera where you want it, and you don't get the views that capture just the right light.

And, he said, airplanes can't fly low enough to get the needed shots.

With drones, “you can fly in the morning or evening and get a feel for how shadows cast across the site and the colors of foliage,” Woll said. “All of that is really useful to designers.” You can also create a 3-D map of a site, he said, showing where streams, creeks and other natural elements are.

He has used photos taken by drone to help in the design of a three-house high-end project in West Seattle. The houses needed to be architecturally similar, but not look alike. Woll said the drone photography helped the architect determine where to put the windows, glass doors, decks and balconies to capture the best views and ensure maximum privacy.

FWD3D also is working with architect Robert Zimmer to develop a presentation to show to potential clients. Drones have taken video of an actual five-story automobile dealership building Zimmer recently designed for Seattle's Sodo neighborhood. FWD3D will work with him to “ghost into” the video potential new uses for the building.

At the client's request, the building was designed to be adapted in the future if zoning or the market changes, Zimmer said.

Zimmer is co-owner of Seattle- and Las Vegas-based zimmerraystudios. He said the presentation will be posted on the firm's website. It will show how the building could be adapted by adding different uses, including housing, office, retail, or a covered garden/plaza on the rooftop — or a combination of some or all of those. It will also show how the project was designed so an office building could be added in what is now a parking lot on the site.

“The client is going to be thrilled, and in fact this kind of exercise could increase the value of this property in the minds of potential buyers,” Zimmer said.

Zimmer's firm is experimenting with drone technology, and he said it seems like it's a logical way to go as drones offer current, accurate, detailed images.

Jackson Buck, a construction superintendent with Spokane-based SRM Development, said labor- and time-intensive old-school surveys had to be done before a developer could understand the potential of a property. Now, drones can map the topography of a property “in a blink of an eye,” so designers can site developments in ways that limit environmental damage, but maximize development, he said. The images may also convince a developer that a site is not viable.

SRM has Federal Aviation Administration-certified pilots, including Buck, who remotely fly its four drones to gain information about the company's construction projects. For instance, videos taken by drones are streamed to non-local design consultants, so the team can discuss questions about elements of a project, or perhaps change a concept, he said.

SRM has used drone photography and video on a number of its projects, including the Google campus in Kirkland. “We use drones for a huge number of reasons, and we use them weekly,” Buck said.