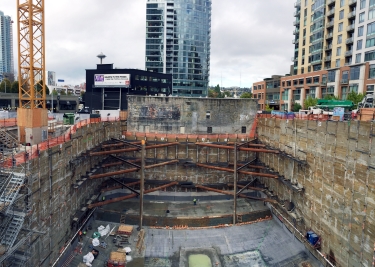 While shoring techniques have not radically changed over the last 50 years, McDowell said big and small shoring contractors — particularly in the Seattle area — are constantly challenged by site features that force them to seek innovative solutions.

“Every project is different, and we like to take on projects that have really challenging access, like down a winding road, or a waterfront,” said McDowell, whose Kent-based company has been in business since the 1940s. “We have to work with the general contractor and the excavation contractor to figure out how to get the drill work done and how to value-engineer.”

Shoring companies such as McDowell Northwest run into a host of issues on nearly every job, from caving soil caused by groundwater to shoring jobs on properties that have been filled.

For Seattle's seawall project, McDowell was tasked with shoring along the east side of the seawall to prevent water from the east flowing into the replacement seawall.

McDowell used a technology devised by a Seattle-based company called SoilFreeze to freeze the soil using a saltwater brine solution in steel pipes, thus preventing water from flowing into the seawall excavation.

While creating permafrost to prevent water seepage is a unique solution, McDowell said dealing with caving-soil conditions is fairly common.

For the 1141 Martin Luther King Way mixed-use project, McDowell said his company fought-off water seepage by using temporary casings as pilings, filled with a mix of cement and slag. Complicating matters was the fact that Seattle has been experiencing a shortage of fly ash, which McDowell said is easier to use and sets more quickly than mix using slag.

“It's fun to take on projects and figure out how to get them done,” said McDowell, who works with his brother, John, and father, Mark. “It's nice to have customers call and say ‘I want to get on your schedule.'”

While McDowell said his mid-sized company has as much work as it can handle, he leaves the downtown tower projects to larger companies.

One such company, Federal Way-based Donald B. Murphy Contractors, tackles jobs such as the 41-story Ninth and Lenora project by GID Development now under construction. In recent years, DBM has worked on five large downtown Seattle projects.

“Between those (five) sites, we've been installing 233,000 square feet of shoring — that's a lot of shoring,” DBM President Todd Jarvis said. “In the last 20 years, we've installed 500 shoring projects and 200 of those were in the Seattle area. With that number of projects, we have the inside track on soil conditions. But every project is unique.”

For the Ninth and Lenora project in the Denny Triangle, Jarvis said the owner of a neighboring property did not grant easement rights for shoring, so DBM installed three rows of internal bracing using pipe struts to support the adjacent property.

At its Eighth Avenue and Howell Street project, a 45-story hotel developed by R.C. Hedreen Co., DBM is using 235 soldier piles and 963 tieback anchors. DBM expects to complete that work this month.

“They know the market and how to get steel (for pilings) on time,” he said. “A lot of times the steel has to be pre-ordered and they're good about knowing the right dollar amounts.”

Phillips worked with Howard S. Wright for 25 years and now works for Trico Companies of Burlington in Skagit County.

Phillips said DBM is skilled at making important adjustments to early phase shoring engineering plans. While working with DBM on an expansion of Evergreen Hospital in Kirkland about 10 years ago, Phillips said DBM worked out an under-pinned drill pile system to shore a corner of the project that connected with the hospital's critical care building.

“There was a lot of coordinating of timing with the hospital, when DBM could only work for a few hours and had to stop (because of the proximity to the critical care unit),” he said. “One of the things I like is they (DBM) always come back with options to problems.”

“Every developer is now trying to get their deliverable to the market in a much shorter path,” he said. “The schedules are getting shorter, understandably, so I think we're prepared for that.”

Though his company of 30 employees is smaller, McDowell said he's content being a mid-sized firm and sees no slow-down of business in the near future. McDowell Northwest began as a crane rental company in the 1940s, then expanded into pile driving, then auger-cast piling and shoring.

“The U.S. economy in general and the regional economy are strong,” he said. “With the amount of new retail and with businesses like Amazon and Expedia expanding, we've done well,” he said. “There's just a lot of money being spent right now on construction. Developers realize that this is a good time to build and costs are not going to go any lower.”

For John Marth, vice president of the Seattle drilling and shoring company Versatile Drilling Contractors, pursuing a blend of public works and smaller commercial projects has been a recipe for staying busy as a shoring contractor.

Though Versatile did drilling work on the new 520 floating bridge, Marth said public works projects are becoming scarcer due to funding, while the multifamily housing sector continues to thrive.

Though Marth said he feels apartment and condo developers are building up too much capacity in Seattle, his plan is to keep his firm of 20 employees small and agile — to shift with economic trends and follow the work.

“Now there's more work on the private side,” he said. “We just go with the flow.”