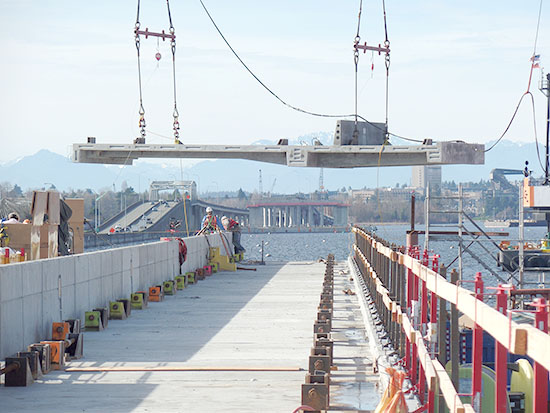 Photo courtesy of WACA
Precast concrete deck panels do double duty as the bridge structure and driving surface, eliminating the need for 3.2 million pounds of steel.

Ready-mix concrete allowed the use of cast-in-place balanced cantilever bridges, eliminating more than 27,000 square feet of trestle and falsework. Using spread footings reduced the number of piles required to build the bridge by 75 percent and preserved 95 percent — or 7,860 square feet — of permanent lake bed habitat.

This design also allowed the team to move one of the piers out of the lake. The sleek bridge produced from this type of concrete reduced shading of the shallow-water habitat by 79 percent.

For the next segment, the 2,130-foot-long floating high-rise structure, 12,000 cubic yards of concrete form the columns and crossbeams that support the 90-foot-long precast girder spans.

From the high-rise, vehicles move to the mile-long low-rise structure that crosses the lake. Here, concrete elements replaced the steel bracing and framing suggested in the original concept design.

Instead, the design-build team used segmental precast concrete deck panels to form both the structure and driving surface, eliminating 3.2 million pounds of steel. The 776 panels were formed by the team in a nearby casting yard using more than 45,200 cubic yards of 6,500-psi concrete.

To provide additional flotation and stability for the large, longitudinal pontoons supplied by the project’s owner, the team installed supplemental pontoons, similar to outriggers on a canoe.

The pontoons were towed to Lake Washington, where they were joined with the longitudinal pontoons to form the foundation for the floating bridge.

The pontoon concrete needed to flow up to 30 linear feet to meet the tight schedule, so the team generated a 28-inch-spread mix composed of fly ash, microsilica, a high-range water reducer and a shrinkage reducer. Careful thermal control, external vibrators, watertight forms and the high-tech concrete were used to meet the goal of casting concrete with no cracking greater than 0.006 inches.

These high-quality, state-of-the-art mix designs, combined with the 3.5 million man hours spent designing and constructing the project, will ensure the bridge meets the demands of its 75-year design life.