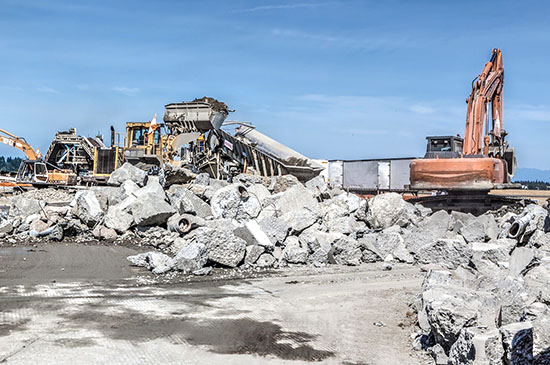 Photo courtesy of WACA
Old runway concrete was recycled on site to provide base course material for the new runway.

The new middle runway, originally built in 1969, was more than 9,200 feet in length. The new runway and adjoining taxiways consisted of nearly 205,000 square yards of 18-inch Portland cement concrete pavement, placed upon a 4-inch asphalt base on top of an 8-inch recycled concrete base.

The recycled concrete base was processed on site from the existing runway and taxiway demolition. Crushing equipment was set up in the middle of the project site, where chunks of old runway pavement were broken down into base course material.

The recycled-concrete base course was placed beneath the new runway, taxiway, shoulder and blast pad sections, providing an exceptionally sturdy construction surface while meeting federal drainage requirements. Having the recycled-concrete crushing and stockpiling operation on site was also extremely helpful in increasing production for base course placement and grading, as well as reducing truck traffic in and out of the site.

Demolished asphalt pavement sections and old steel embedded in the demolished concrete were sent to recycling facilities. Additionally, 20 percent of the old asphalt was reincorporated into the new asphalt mix for the shoulders and blast pad areas.

Paving of the runway and new taxiway sections began in late June 2015 and was completed in four months.

Contractors also performed several panel replacements for the Port of Seattle under a contract change order around the airport’s busy terminal area. Due to the locations of the replacements, many of the panels were placed using a rapid-setting concrete mix that allowed for aircraft traffic merely four hours after placement.