Rarely does a high school open in the middle of an established residential neighborhood of a major city like Seattle.

The costs of finding space for the school and integrating it within the existing suburban fabric is generally prohibitive.

Seattle’s Lincoln High School, one of the oldest in the city, is conveniently located in the Wallingford neighborhood and will be one exception when it reopens in 2019 as part of Seattle Public Schools’ Building Excellence IV capital program.

Lincoln High was originally built in 1906. It served Seattle for 75 years before closing in 1981. Since then, the school’s buildings occasionally served students when other schools underwent renovations or major construction programs, and the students of those schools needed a place to learn in the interim.

Lincoln High has had 42 remodeling efforts or additions over the years on its 6.8-acre site. This staggering amount of expansion and renovation work was driven largely by population growth in the early-to-mid-1900s.

Image courtesy of Bassetti Architects [enlarge]
A new glass enclosure between the north and central wings will serve as the main entry.

At its peak, Lincoln served 2,500 students annually. After a brief decline, and the subsequent closing of the school, the Wallingford area is experiencing a resurgence. When it opens in September 2019, the new Lincoln High will serve approximately 1,600 students.

The renovation project is being managed by Heery International, a professional services firm with a specialty in ensuring that school renovation and construction projects, and particularly those with complex requirements like historic preservation, are delivered within budget, on-time, and meet or exceed modern standards for the design of education facilities.

In working with older buildings like those at Lincoln High, which date from 1906 and include additions from 1914, 1931 and the 1950s, renovation teams can often discover unexpected elements of a building that require costly or time-consuming attention.

Heery is addressing the unknowns at Lincoln High by conducting a discovery assessment and then planning the budget and schedule around the likelihood of mitigating risks that might not be shown on the original construction documents.

The total renovation covers 194,000 square feet and seeks to retain the historical characteristics. At the same time, the project will bring the campus up to current standards for learning environments, accessibility and technology, among other considerations.

Much has changed in public building codes, education policies and the way buildings serve the educational needs of the public since the school was originally designed, or even since its last significant renovation.

Libraries, for example, are now modern media centers with computers, tablets and internet connectivity. The new Lincoln High library, converted from an old auditorium, will be wired for modern technology and capable as a portal for research and accessing collections of digital media.

Because technology is now regularly integrated into the curriculum and teaching methods, the library and the school classrooms are redesigned with spaces for digital presentations.

Another of the requirements to be incorporated involves accessibility to all areas of the building, in compliance with the Americans with Disabilities Act of 1990. This law ensures that areas of public buildings are accessible to persons with disabilities.

Some elements of the school, such as the main stairs and fountain, are considered landmarks and must be carefully preserved. Other historical architectural elements that were covered by previous renovations are being restored.

Additionally, the team is going to great lengths to ensure that non-historical areas being renovated have the discarded original materials reused for other applications. For instance, the benches to be distributed across campus will be crafted from old balusters of the gymnasium track railing. 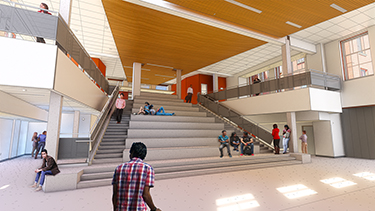 Image courtesy of Bassetti Architects [enlarge]
The two-story learning commons will double as the cafeteria and open to an outdoor courtyard.

Balancing the preservation of the architectural history and characteristics with the need for a modern school is critical to this project. How the project’s renovation requirements are being designed and integrated into the historic campus buildings was influenced by a high level of public input. Seattle Public Schools, Heery and the design team from Bassetti Architects conducted public meetings to collaborate with neighbors and stakeholders.

The project also involves some adaptive reuse such as the conversion of old gymnasiums to new, larger classrooms, according to Michael Davis of Bassetti Architects.

Perhaps the most important components of the renovated school are the new primary entryway and the new two-story learning commons, which Davis calls the new heart of the campus. The entry is a glass enclosure between the school’s north and central wings. The learning commons also serves as the cafeteria and connects directly to the exterior courtyard.

To address the ambitious schedule of this complex project, the team is using various strategies, including early involvement of the mechanical contractor. This will help coordinate the design and installation plans for the new mechanical systems in the building.

Using the mechanical contractor/construction manager method of delivery also promises to save costs by allowing for collaboration with the design team in choosing the most cost-effective building systems. This effort also allows the project team to purchase related equipment early, ensuring that it is ready on site when needed, and the team has a plan in place for staging and installation.

Currently, the project is tracking on budget and on schedule, with the balance of the bid packages opening this September for construction to begin in October.

Steven Moore is a senior project manager at Heery International focused on the management of planning, design and construction projects for K-12 schools.