In a school district where over 60 percent of the student population is on free or reduced-price lunch and less than 60 percent meet national testing standards, a STEM school is a definite lifeline for its students.

The Bremerton School District bond project, completed in 2016, included a new 14,000-square-foot classroom wing for students in grades six through eight. (The school has been a STEM academy since 2011.) It was clear to the school district and Rice Fergus Miller that the addition presented an amazing opportunity for students, the district and the greater Kitsap community.

Each community has its own values, its own story. A design that captures the essence of the community, embraces it, celebrates it and makes possible its continuation, goes beyond simply being meaningful — it becomes a natural extension, building off of what is already there.

Knowing the importance of this project, and making sure that each project dollar was maximized for best value, it was clear that its design needed to be so much more than a standard school building. 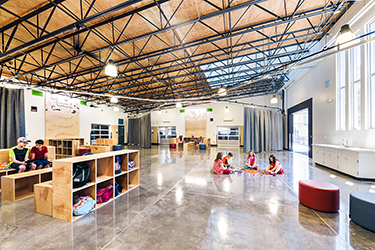 High on the list of design goals was to have a space that integrated real-life teaching and hands-on learning.

“Being a STEM school, we knew it needed to be a highly energy efficient, sustainable building,” says Steve Rice, principal at Rice Fergus Miller and architect of record for this project.

“More than that, we wanted it to teach students about the science that makes a building work sustainably, and to be able control how their building performs.”

What better way to learn science, technology and sustainability than a hands-on approach that uses the school building as a live experiment and teaching tool.

The addition was designed to be a high-performance building. It uses passive means to heat and cool the interior spaces, and the students are active participants in achieving thermal comfort for themselves.

The central open space, or flex space, is lighted primarily by large clerestory windows in the “chimney.” Natural light suffuses the interior space giving it a bright and airy feel.

Some of these windows are operable by the building occupants. They are guided by a thermometer set outside the building. When it gets too warm or cold a guide light turns red or green, alerting users that the windows can be opened or closed. Opening classroom windows, vents between the rooms and the commons, and the clerestory windows will create a movement of air out through the chimney as warm air rises.

Not only can students within the classroom control the temperature within their space, but they can also learn the scientific basis behind it.

The building program called for four classrooms, a flexible space in the center, ancillary spaces and a connection to the existing school.

By creating a big, multi-use flex space that all the classrooms could open to, the design not only minimized circulation space but maximized the square footage for learning. The garage doors that open between the classrooms and the commons allow teachers to expand the classroom when bigger space is needed. Large, noise-mitigating curtains on tracks crisscross the commons, creating smaller rooms within the space for group activities without interfering with other classes.

Principal Lisa Heaman says, “What we enjoy most about the design of the STEM wing at West Hills are the endless possibilities for collaborative, hands-on, problem-based learning. Teaching and learning can easily transition outside of the classroom and into the flex space or even to the outdoors. In addition, the rolling and adjustable furniture contributes to the ever-changing learning environment. A space can be converted in a matter of minutes to meet the needs of a lesson.”

The courtyard between the new wing and the existing school also provides an outdoor space for teaching, learning and play.

The project is targeting an Energy Use Intensity (EUI) of 18 kilo-British thermal units per square foot annually. The national average EUI for schools is 68, according to Commercial Buildings Energy Consumption Survey (CBECS) data. 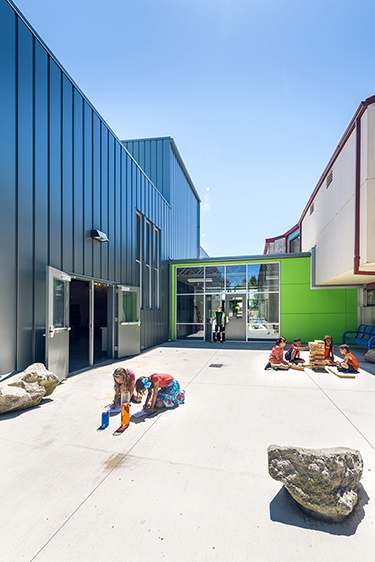 [enlarge]
A new courtyard provides an outdoor space for learning and play.

Schools in Seattle operate at an EUI of 43.5 on average. The STEM wing will use 74 percent less energy than the CBECS national average and 58 percent less than the Seattle schools average.

Assuming a base EUI of around 43.5, the STEM expansion will save 77,112 kilowatt hours a year.

Where students can thrive

“The architectural design team from Rice Fergus Miller, coupled with our school professionals, was forward-thinking and incorporated many sustainable strategies for energy savings, making this building not only a model of efficiency in the Bremerton School District, but also in our surrounding school communities.”

Ivi Gabales, business development manager and associate at Rice Fergus Miller, and has over 25 years of architectural design, construction and marketing experience in several markets.