In the fall of 2013, the Maple Valley community approved a $195 million construction bond measure that included the design and construction of the new Tahoma High School and Regional Learning Center.

As with many bond measures, the primary objective was to address an increasing student population and reduce or eliminate the use of portable classrooms. The measure also offered an opportunity to construct a new high school within the city limits.

The previous Tahoma High (now Maple View Middle School) is in neighboring Covington, along the western border of the district. The new high school is closer to Maple Valley’s commercial core and would serve both students and the wider community.

Prior to the passage of the bond, DLR Group and Tahoma School District worked to develop the educational specifications and program of the new high school. The district was also promoting a district-wide educational initiative that centered on the notion of developing “future-ready” students — the primary tenet being that each student would develop and work towards a viable post-graduation plan. Such a plan could include job-ready technical skills, a two- or four-year degree, military employment or any number of less traditional paths. 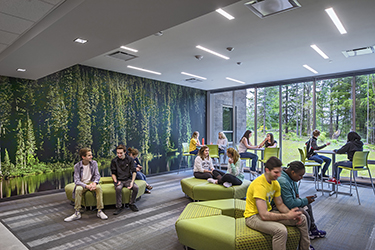 As the educational specifications progressed into the design of the new building, the district’s community focus and future-ready initiative began to inform how challenges were met and design decisions were made.

As design began in earnest, the team was immediately confronted with the challenge of the site, known as the “doughnut hole.” The new high school would occupy land at the former Elk Run Golf Course, part of unincorporated King County and surrounded on all sides by the city of Maple Valley.

The project team was presented with unique challenges, including the rolling topography of the golf course, provision for continued access by King County, and Bonneville Power Administration easements. Initial schematic designs exceeded the district’s budget, so the project scope and budget were realigned. A simplified design began to emerge that yielded a fully balanced site and further cost savings.

“The district started out with some very ambitious goals that we were able to achieve as a result of the collaboration,” said Lori Cloud, the assistant superintendent. “Our team of designers and contractors found creative and cost-effective ways to overcome the site’s physical challenges.”

More than 150,000 cubic yards of earth was moved onsite, requiring no offsite fill, she said.

Cost estimating and value engineering review continued in weekly meetings throughout design with the owner, architect and contractor. The partnership among the project team yielded solutions that provided cost and, eventually, construction time savings.

A senior superintendent with Skanska said he recalled an example in which the design team revised portions of the envelope to reduce construction time, cost and complexity. Further, anticipated steel procurement and erection estimates yielded alternate framing methods used to stay ahead of construction deadlines.

Ultimately, the team’s efforts during design led to buyout savings during bidding that returned money to the district and allowed it to further invest in the bond promises made in 2013.

Kasey Wyatt, a senior associate at OAC Services, said, “The level of true collaboration amongst the team resulted in a project that exceeded program expectations while remaining pragmatic, which in turn resulted in the ability to over-deliver on the promises made during the bond campaign, such as the full replacement of Lake Wilderness Elementary School and more robust improvements to each school as part of the ‘Warm, Safe, Dry’ initiative.

“From day one, the district held each team member accountable to deliver the project better and faster by challenging us to think outside the box of how traditional public works project are typically delivered. There was continual dialogue on how the project could better support the others resulting in a broader success program-wide.” 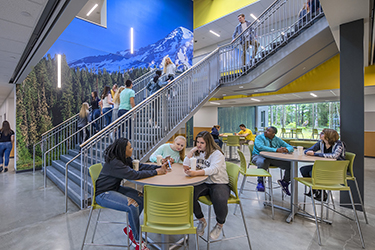 In 2013, the residents of Maple Valley made an investment in Tahoma School District and their community. Perhaps less obvious, the construction of the new school has likewise provided direct investments in the community.

Margot van Swearingen, a project manager with Skanska, witnessed that reality during the construction process.

“The project tracked our local spend, including subcontracts for companies based in the Tahoma area, material purchases from local hardware and lumber supply stores, fuel purchased locally for equipment, and employee personal spending,” she said. “In total, the project spent over $10.2 million locally.”

The team engaged with local students and graduates in offering job shadow opportunities, internships and site visits. Van Swearingen also pointed out that the jobsite regularly supported local charities, including the Maple Valley Food Bank and Vine Maple Place, contributing toys and food for holiday drives and over $10,000 towards preventing local homelessness.

As the promises of the 2013 bond come full circle, the new Tahoma High School and Regional Learning Center will open for its first day of school on Sept. 6. The 312,300-square-foot building will have room for 2,400 students.

Reflecting on the successes and challenges of this high school, it wouldn’t have been possible without dedicated commitment from the community and project team. As education continues to shift towards flexible space for project-based learning, and opportunities for partnerships with higher education providers and industry partners, Tahoma High is prepared for the challenge.

Mike Janes is a senior associate at DLR Group and the project architect for Tahoma High School and Regional Learning Center.