Photo provided by Lioneye Aerials
This cable-stayed pier at Vancouver Waterfront Park juts nearly 100 feet over the Columbia River without any in-water support.

The new $24 million Vancouver Waterfront Park offers not only public plazas, viewpoints, a water feature, a playground and an urban beach, but it also creates public access to the river for the first time in almost a century.

Since 2012, BergerABAM has led a multidisciplinary team that has helped the city of Vancouver plan, design and construct the 7-acre destination on a former paper mill site.

The project’s focal point is the Grant Street Pier, a concrete, cable-stayed structure conceived by public artist Larry Kirkland that projects almost 100 feet over the Columbia River — with no in-water elements. As part of the city of Vancouver’s $1 billion waterfront revitalization program, the park anchors the plan for multifamily and commercial growth in the downtown Vancouver area. 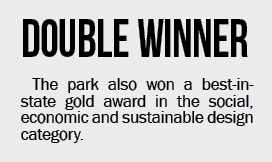 By avoiding any in-water structural support, the pier maintains unhindered aquatic species migration. The pier also uses white colored concrete instead of painted steel or painted concrete. This design decision provides economic and environmental sustainability benefits, as it reduces maintenance requirements and eliminates the need for future over-water painting. Further, stormwater runoff from the wood surfaces of the pier is collected and treated in low-impact-development bioretention treatment cells.

The design of the Grant Street Pier’s foundation faced a number of challenges, including unstable soils and a constrained site. BergerABAM and GRI collaborated to design a system that includes drilled shafts, sheet piles, micropiles and ground anchors.

Particularly innovative was the dual purposing of a portion of the work-isolation cofferdam. The site is underlain by liquefiable sand that can result in lateral spreading during an earthquake, causing the ground to move toward the river.

The most economical mitigation for lateral spreading is usually ground improvement, such as the installation of stone columns. However, the permanent foundation elements were located completely upland of the ordinary high-water mark in a very narrow right of way between the river and the private development.

As such, there was no room available to install ground improvements without significantly affecting the private development schedule. Therefore, lateral spreading had to be resisted by the brute force of the structure itself.

Because a sheet pile cofferdam was being used to isolate the foundation construction from the river, the engineers made use of what would otherwise have been a temporary back wall of the cofferdam and repurposed it as a permanent tied-back bulkhead to cut off the lateral spreading. This was a critical design decision that solved the geotechnical problem while allowing private upland construction to continue on an independent schedule.