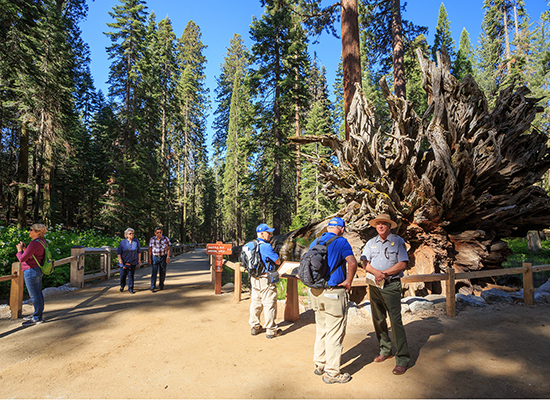 Photo by Orion Ahrensfeld
A road on this Yosemite National Park site was removed to protect a grove of giant sequoias.

Improvements made to the tourist attraction in the past century to improve visitor access — including paved roads, parking lots and a portable toilet area — have aged and degraded over the years, threatening the giant trees and interfering with the peacefulness of the area. A parking lot just 30 feet from some of the giant trees was often overflowing, some of the road culverts were plugged, and the odor from the portable toilets was disturbing visitors.

David Evans and Associates led the design effort to help restore the natural systems by removing parking lots, rerouting roads and trails, constructing boardwalks over critical areas, establishing a modern transit system and modernizing the visitor center and transit facilities. The goal: to help restore the health of the grove for the owner, the U.S. government, while continuing to provide visitors with a pleasant experience.

Removing an existing access road and replacing it with an elevated boardwalk created an opportunity to restore and protect the natural environment, but it came with some challenges.

The design had to take into account the construction methods available to the owner and the trail crews that would build the boardwalk. It also had to work around the restrictions on the amount and kinds of equipment and materials that could be brought into the site.

In addition, the design had to minimize the impact of foundation elements to vegetation, drainage and other natural systems. Tree roots were everywhere, so steel support framing for the boardwalk was designed so the locations of the piles could be adjusted up to 7 feet in plan without affecting the path or alignment of the boardwalk.

Restoration work also included replacement of the vault toilet facilities with flush toilets in another area of the park, as well as an additional new onsite wastewater treatment system. Designers sought to maintain adequate setbacks from significant trees, avoid bedrock and rock outcroppings, locate leach fields appropriately in hillside terrain, and provide access for service vehicles as they accomplished the environmentally sensitive work.

The design team also replaced and optimized a number of parking lots and access roads in order to protect the giant trees. Of particular note was the removal of the 120-space lower grove parking area that surrounded a half-dozen giant sequoias in a loop. Also removed was an access road to the upper grove area that served to transport visitors.

New parking was consolidated at the park’s south entrance, accommodating visitors while eliminating vehicle noise and congestion at one of the most popular areas of the park. As a result of the new parking, more than 1.5 acres of asphalt were removed from the lower grove and the soil matrix was reestablished, improving conditions for the giant sequoias.