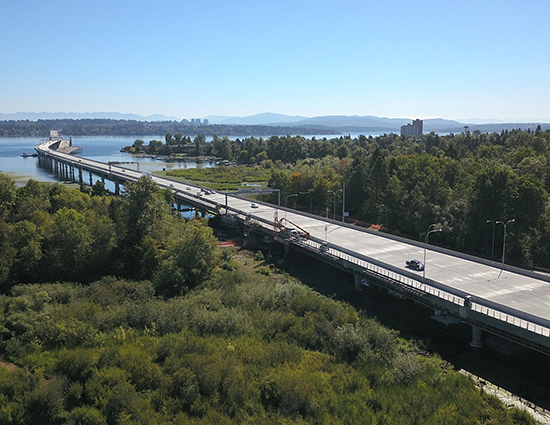 Photo provided by WSDOT
The $200 million SR 520 West Approach Bridge North was built with seismic isolation bearings so the structure can carry traffic even after a major earthquake.

Carrying more than 115,000 vehicles and operating near capacity for more than 13 hours a day, the bridge’s narrow shoulders and lack of transit/HOV lanes meant that a single disabled vehicle could cause major backups.

In 2009 the Washington State Department of Transportation identified the SR 520 bridge as “essential,” meaning it must be open to emergency traffic immediately after an earthquake and open to all traffic within days. Designing the bridge to accommodate this requirement meant the design team of HDR/Shannon & Wilson had to put into use a number of innovative systems.

The old bridge was a fixed structure, and the hollow columns supporting it were vulnerable to catastrophic failure during an earthquake. The new $200 million west approach bridge uses 108 isolation bearings and 95 solid columns, resulting in the state’s most extensive use of seismic isolation bearings to date. This new system will enable the new SR 520 West Approach Bridge North to remain in service immediately following a 1,000-year earthquake.

With three sources of earthquakes in Western Washington, each generating different types of shaking, the design team used a new technique to develop shaking records.

Conditional mean spectra (CMS) is a tool that develops earthquake records with realistic shaking levels by considering the characteristics of individual earthquake sources, as well as bridge behavior when subjected to those earthquake types. The tool helped create a detailed, peer-reviewed test of computer bridge models, resulting in optimized design.

A first in the United States, the bridge uses Tensa-Modular expansion joints with noise-reducing sinus plates. The plates create smaller gaps in the roadway surface, allowing passing vehicles to maintain constant contact with the joints’ surface and eliminating the noise caused by impact with the gap edges.

The project was a pilot test for the products, which also provide a smooth driving surface, minimize vibration and noise by up to 80 percent, and create a safer deck for motorcycles and bikers.

The west approach bridge north project also accommodates bicycle riders by adding a bike and pedestrian lane where none existed before, completing the 12-mile trail between Redmond and Montlake. The project is also designed to support light rail in the future.

The design team’s embrace of the seismic isolation bearings and CMS resulted in a savings of more than $74 million.

The team was able to reduce the drilled shaft size and eliminate 39 drilled shafts and columns, shoring casing and crossbeams. By reducing the amount of concrete used in the improvement, 12.5 million pounds of carbon dioxide emissions were eliminated.