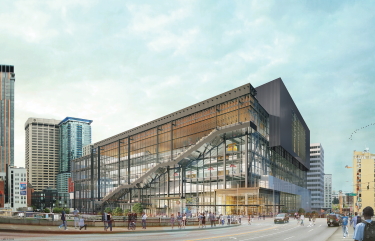 Image courtesy of LMN Architects [enlarge]
The convention center addition will stack more space onto less land than any other center in North America. 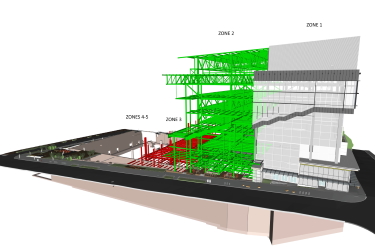 Lewis image from shared model [enlarge]
This model shows Zone 1 fully enclosed, Zone 2 with steel complete, Zone 3 with steel beginning, and zones 4 and 5 used as staging. The view is from Boren Avenue and Pine Street.

The Washington State Convention Center addition will be unique. Most convention centers are low buildings over many acres, but the addition will stack more program space onto less land than any other center in North America. As a result, it will rise over 200 feet above grade for most of its double-block site between Olive, Pine, Boren and Ninth.

Due to the building's massing and complexity, traditional bottom-to-top construction would have meant more than four years of construction. Instead, the team chose a “billboarding” approach — the first use for a commercial building of this scale in the Northwest — to cut a full year from the construction duration.

With billboarding, the steel structure will rise in one geographic zone at a time. Five zones are arranged in an east-to-west sequence, and each zone will reach full height as the next zone's steel begins. This will save a year due to simplified logistics and improved workflow.

The first zone will start this month at the east end near Boren Avenue, rising above a small amount of steel that is already erected to house mechanical equipment. Each zone's steel structure will reach its full height in two and a half months. The complete structure will top out in October 2020, just 12 months after steel erection begins. Zone 6, the below-grade portion of the addition sitting north of Olive, will be erected separately.

Realization of this concept for the Washington State Convention Center has been a collaboration of the Clark/Lewis GC/CM team (a joint venture of Clark Construction and Lease Crutcher Lewis), project manager Pine Street Group, LMN Architects, civil/structural engineer Magnusson Klemencic Associates, steel erector American Bridge and a host of related designers and subcontractors. The team brought billboarding experience from other regions, then dug into the details to make it work.

Early participation by every player has been essential to finding win-win solutions. For example, it was crucial to bring American Bridge on board in March 2018 to maximize construction means and methods input during the process of finalizing the zoned structural design, allowing the best decisions from the start rather than stopping and rethinking later.

How does the concept cut a year from the schedule? First, imagine the traditional alternative: A 5-acre site with some work hundreds of feet from the nearest loading zone. No laydown space. The entire local population of any given trade (more or less) cycling through in starts and stops as each floor becomes ready, with long schedule durations as each trade performs 5 acres of work at a time.

Billboarding will be faster than the traditional scenario because:

• Structural steel will be assembled in each zone in two and a half months. Two large-capacity mobile cranes will erect the steel from the area where the next zone will be built. This will provide the space needed for fast, safe material movement.

• Other trades will start seven and a half months sooner than they would in the traditional bottom-to-top scenario, because they only need the first zone to rise above their work level. It will be especially helpful to start long-duration trades such as mechanical, electrical, elevators and finishes early. The team strategized to start “key rooms” (City Light vaults and switch room, fire command, central plant) as early as possible due to tight timelines and the need for plenty of commissioning time at the end.

• Each trade will cycle through its work in smaller chunks, with a continuous, efficient sequence rather than stops and starts. Each will follow the same sequence through the project, allowing the efficiencies of repetition and starting critical work scopes like vertical transportation as soon as each billboard zone is ready.

The team has worked through several challenges to make billboarding successful. For example:

• The zones are designed to be built independently. This is important for both structure and integration of functional systems that rely on each other. At selected locations, the team defined elements where a small amount of structure must be built earlier to ensure safe erection. The team aligned the zones east to west in part because the long-span trusses run north to south, avoiding the cost of temporary supports.

• Crane selection was important, because hoisting structural steel is schedule critical. The team considered tower cranes, but the required separation between cranes would have meant only one crane and a slow pace. Instead, American Bridge is using two mobile cranes to double its workflow. While their reach is shorter than tower cranes, their capacity is greater and they can maneuver close to the work.

• Most trades are accustomed to thinking of entire floors at once. Some of the transitions and breaks in completed work will be atypical with billboarding. The response from trade partners has been impressive, as firms such as MacDonald-Miller Facility Solutions and Veca Electric & Technologies have adapted, adjusting their work plans for the zoned approach.

The addition will complete in late fall 2021 and open for business in 2022. In the meantime, the project will be fascinating to watch — a unique project in our city's history, rising in a unique way.

Josh Van Kirk is a project manager at Lease Crutcher Lewis. He is managing the addition's building structure scope as part of the Clark/Lewis team.