The updated Seattle Asian Art Museum has been more than a decade in the making. And it’s safe to say that when it opens Saturday, many hands helped bring the renovation to life.

It’s common for Seattle projects to have many stakeholders and be greatly influenced by the community. After all, ours is a community that’s vocal, informed, and sincerely cares about our city’s development. Nowhere is this on better display than the Asian Art Museum.

In the case of SAAM, the Seattle Art Museum’s needs were only the beginning. The structure’s unique home within Volunteer Park meant working closely with many agencies within the city of Seattle, including Seattle Parks and Recreation and Seattle Public Utilities.

The park’s legacy required navigating original designs by renowned landscape architect Frederick Law Olmsted. The museum was designated a Seattle historic landmark in 1989, meaning historic preservation groups had to approve any and all renovation plans. And its position in an active neighborhood meant consulting with deeply invested neighborhood and community groups. 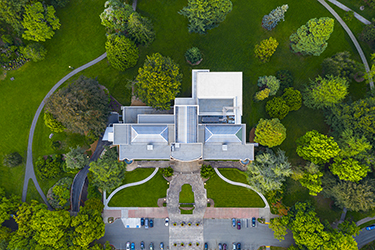 Photo by Tim Griffith [enlarge]
Restored pathways and a new receiving dock had to respect the legacy of the Olmsted-designed park surrounding the museum.

Neighborhood committees, park advocates and city officials all had a voice, and each held different priorities, unique approaches and distinct ideas of what the final product should be.

Decisions made by the project team were greatly influenced by these voices. As the civil engineer, the Coughlin Porter Lundeen team spent much time working with lead designer LMN Architects and landscape architect Walker Macy to develop solutions that reflected stakeholder input. It’s common practice here in Seattle and an essential part of serving a community that’s invested, vocal and truly cares.

The Seattle Asian Art Museum is the perfect case study for such a practice. The project team collaborated to identify the themes shared at community forums, reconcile the needs of the community with the needs of the museum, and ultimately, create strategies for the site. To our civil engineering team, this meant respecting Volunteer Park’s status as an Olmsted-designed park and a Seattle treasure by finding low- to no-impact solutions.

Before this renovation, the museum hadn’t received a significant upgrade in almost 90 years. Launching this week, it’s poised to be a contemporary museum boasting a stunning collection and visitor experience. Therefore, some updates were non-negotiable. The loading dock was entirely out-of-date, built with the original structure, and couldn’t support current collections. Additionally, building entrances had to be updated to adhere to ADA standards.

These upgrades were done with great care. In addition to the restoration of Olmsted-designed pathways, carefully designed ramps protect existing elements and natural vegetation. Extraordinary measures (including arborist consultations and the deployment of an air spade) were taken to protect a large beech tree and its root system on the east side of the building.

Even things like utility metering, garbage and loading docks were evaluated, resulting in an atypical back-of-house strategy that accommodates the small exterior footprint and fits more seamlessly into park surroundings.

And that’s all above ground.

Measures were taken beneath the surface too. When Coughlin Porter Lundeen joined the team and became familiar with the site, record drawings and geographic information system (GIS) data review revealed a significant issue. An existing public water main ran directly beneath the museum’s planned addition area.

Moving the main was a near impossibility, but it could not be left under the new museum addition. A unique civil solution rerouted the main around the footprint of the new addition, providing Seattle Public Utilities continued access and clearing the way for the addition.

While rerouting around the museum may sound simple, the solution required extensive permitting, collaboration with Seattle Public Utilities, Seattle Parks, arborists and other stakeholders. It also required unique geometries, installation methods to reduce effects on the trees, and careful construction operations to respect the park and park visitors. The revised water main is no more apparent to park users than before the museum was expanded.

It’s exciting to witness the museum reassume its position as a Volunteer Park centerpiece. With the renovation behind it, the museum now stands as a beautiful home for art and cultural gathering space. To us it will always be a shining example of our commitment to the Seattle community’s problem solving, perseverance and collaboration.

Ken Wiersema, PE, LEED AP, has over 20 years of experience as a civil engineer. He is a civil project manager at Coughlin Porter Lundeen.