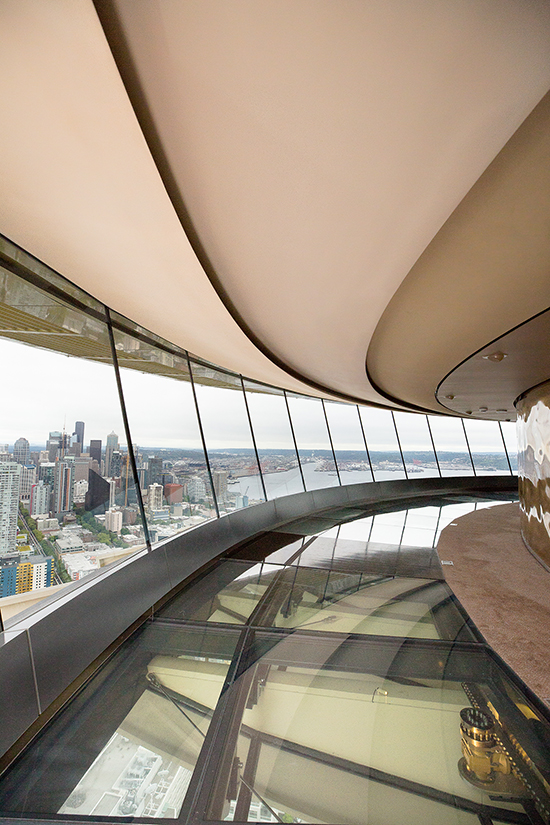 Photo by Megan Braemore
A main challenge of the Century Project was that the jobsite was only accessible by elevators, one of which was designated for the public.

The Space Needle is Seattle’s most iconic and distinguished landmark. It was originally built for the 1962 World’s Fair as a Space Age example. It stands 605 feet tall and can withstand 200-mph winds. It’s best known for its 360-degree panoramic views of the Cascade and Olympic Mountains, Mount Rainier, and downtown Seattle.

A main challenge was that the jobsite was only accessible by elevators, one of which was designated for the public. PCI Seattle Interior managed a plethora of scopes, including fireproofing, drywall, light-gauge steel-framing assemblies; Fellert acoustical plaster; custom- manufactured GFRG wave panels; exterior air- and moisture-barrier; and a unique, radial wood wall surrounding the stairway.

Each phase of work was carried out in extremely tight spaces, requiring creative problem-solving by all trades. Since the Space Needle was still open to the public, construction areas were divided into pie-shaped sections with temporary wall barriers to separate work from the public eye.

A panelized soffit around the entire exterior had to come together perfectly as did the wood wall surrounding the inside stairway. On the Observation Level, new floor-to-ceiling glass walls, glass barriers, and floating glass benches allow visitors to “lean into” the city below. At the 500-foot level, The Loupe is now the world’s only rotating glass floor. The Oculus Stair connects the top three levels with a glass-floored round oculus at its base.