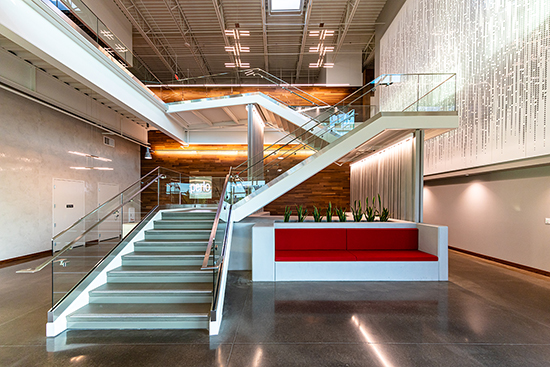 Photo by Gabe Hurley
Wall support for the Perlo Construction Headquarters project came from hidden metal stud structures framed just below the top of the studs that also supported the ceilings.

After being awarded the contract to build the new headquarters for Perlo Construction in Tualatin, The Harver Co. started with boots on the ground in August 2018 to meet a hard deadline in December 2018.

Most of the work was located on the second floor, with some waiting on other MEP subcontractors to get started first. The unusual office design consists of freestanding pods with nothing attached to the structure above. Each office had different doors, relites and clerestory windows.

Wall support came from hidden metal stud structures framed just below the top of the studs that also supported the ceilings. Each opening had to be exact to fit premade storefront systems. The final, flawless openings represent the craftsmanship of the finishing team.

The executive’s office sits under a wood-wrapped, steel-frame trellis surrounding a 3Form Baffle ceiling, another exacting process. Other spaces included Madrid wood ceilings, CertainTeed acoustical clouds, and MDC Zintra clouds. Multiple delays on concrete pours challenged the tight deadline, but thanks to countless long days by the trades, the finished project was completed with a couple of days to spare.

Judges’ comment: “The fantastic design, combined with outstanding craftsmanship, has created an interior environment that makes a strong statement about the commitment to excellence that clients can expect.”