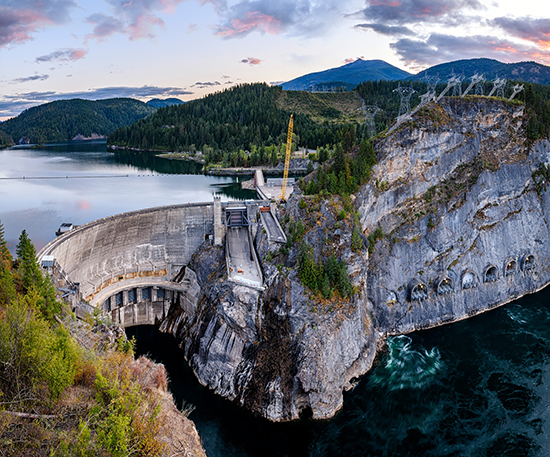 Photo courtesy of Imco General Construction
Boundary Dam on Pend Oreille River includes spillways that are cut into the rock and oriented so that water discharges from both sides.

Boundary Dam is located on the Pend Oreille River in northeastern Washington. The unique spillways are cut into the rock and oriented so that water discharges from both sides and meets midair to dissipate the falling-water energy that might otherwise erode canyon walls. It is the largest underground power-generation dam in the nation and provides nearly 50% of the power generated by Seattle City Light. The project goal was to remove total dissolved gas modifications made in 2016 and restore the spillway to original conditions. Stainless-steel roughness elements increased TDG in the river, adversely impacting the fish population, and structural concerns when struck by debris. Imco removed concrete and roughness elements with demolition equipment and by hand, decommissioned post-tensioned anchors, and placed reinforced concrete to match the existing spillway slope and contours. Significant fall hazards required heightened safety precautions. The work was completed in 10 weeks.