The University of Washington Bothell (UWB) and Cascadia College (CC) campus was established 26 years ago and is jointly occupied by both institutions.

Located just east of Bothell’s downtown core, the campus was originally created as a planned unit development and relied on an approval process that required updating with every capital project — a cumbersome and costly process for both institutions.

In 2016, UWB and CC joined forces to initiate a new campus master plan (CMP) in partnership with the city of Bothell. Their goals included establishing an overarching vision for growth and development on their uniquely co-located campus, as well overhauling and streamlining the jurisdictional process for initiating and executing future projects.

Following the lead of the UW Seattle campus, UWB and CC initiated a process to develop a CMP that not only charted the course for both institutions to grow alongside each other, but also established and codified the city’s jurisdictional/land use requirements and the processes for review, assessment and approval of capital projects. 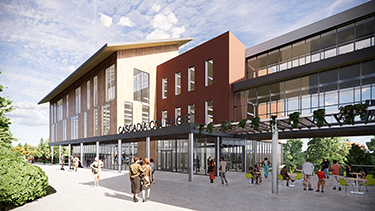 Recipient of an Excellence in Planning award by the Society for College and University Planning, the 2017 campus master plan was developed by a Mahlum Architects-led planning team in partnership with UWB, CC, the city and, ultimately, various transit agencies. Guiding principles and design guidelines for campus development were established to maintain consistency with the campus’ current design character and to strengthen connectivity and relationships with the adjacent community and city of Bothell at large.

• Improve pedestrian and bicycle safety by creating a new transit hub that would remove over 500 bus trips per day from the campus core.

• Formalize the entrance to the campus core by replacing the existing transit loop with Campus Crossing, an iconic landscape that also connects the existing upland conifer forest to the North Creek wetland.

Within five years of the CMP’s completion, key partnerships that were established and/or strengthened during the planning process have resulted in three major capital projects that are currently in design or under construction and represent significant progress toward realization of the specific elements of the campus vision described above. 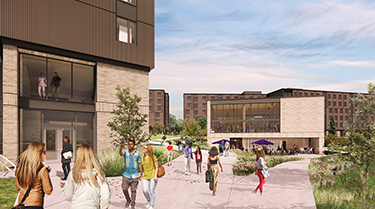 Prior to the 2017 CMP, UWB and CC had each separately planned and submitted capital requests for new STEM buildings. The strengthened partnership between the two colleges resulted in a combined request for one shared STEM building — the first shared academic building on campus.

Combining their resources enabled both institutions to meet growing demand for STEM education sooner, more efficiently, and with less campus disruption than if each institution had acted alone. UWB and CC were allocated joint funding for the 79,000-gross-square-foot STEM4 building, currently under construction by the design-build team of Lease Crutcher Lewis and Mithun. The project cost is $79 million and it is scheduled for completion in fall 2023.

In 2011, UWB had acquired a 1980s-era apartment complex dubbed Husky Village and repurposed it into student residences to address growing housing demand. A critical component of the CMP, the Husky Village Redevelopment is a 295,000-gross-square-foot replacement project that includes 1,055 new student beds (a net increase of over 800 student beds) to meet both first year and upper class student needs, as well as a dedicated food service facility to serve the residents and broader campus community. This project also incorporates a Sound Transit stop at a proposed bus rapid transit line at the campus perimeter and extends the accessible Campus Promenade to link the new campus gateway to the academic campus core.

The Husky Village Redevelopment created a new form of partnership for the campus — a ground lease agreement between UW and Capstone Development Partners. Capstone will develop and build the project, and its affiliate Capstone Management Partners will operate and maintain the four-building facility for up to 70 years. The design-build team of Andersen Construction and Mahlum Architects was engaged to realize this two-phased, $160 million project, currently under construction and scheduled for completion in fall 2024.

Meanwhile, Cascadia College is seeking state capital budget funds to construct its CC5 Gateway project at the edge of the future Campus Crossing and at the north entry to the academic campus core. The recently approved pre-design study by Mahlum Architects envisions a new facility consolidating student services for Cascadia students implementing the Guided Pathways principles as adopted by the state Board for Community and Technical Colleges. These principles hold that improving visibility, access, and successful navigation of student services, particularly to students from disadvantaged and underrepresented populations, is critical to student retention and success. Consolidating these services in a new facility at the gateway to the academic campus core will achieve these goals and strengthen Cascadia’s identity on the shared campus.

The 37,000-square-foot project has a project budget of $41 million with construction funding to be included in the 2023-25 capital budget request. The project will utilize the general contractor/construction manager delivery method and is currently scheduled for completion in spring 2025.

The 2017 UWB/CC campus master plan established a bold vision for the future development of the Bothell campus. In five short years, UW Bothell and Cascadia College have moved three strategic projects forward on this unique, co-located campus. Leveraging partnerships and working together across boundaries, these projects are revealing a richer, more integrated future and furthering the campus vision at a pace that is exceeding all expectations of the planning team.

As the leader of Mahlum’s higher education studio with over 30 years of architectural experience, Mark Cork offers insight into campus and facility planning issues for both educational and health care institutions.