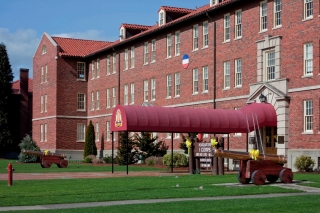 Loren Pease is not afraid of competition. As the owner of Pease Construction in Tacoma, Pease said he feels confident that his company has the qualifications to compete for a range of work.

But Pease said the federal government's use of the multiple-award task order contracts (MATOC) process for military construction projects is making it hard for local contractors to find work.

“MATOC limits competition and any time you limit competition you pay more,” said Pease. “The fact is this is the public's money.”

From the government's perspective, the MATOC system is a valuable contracting method that saves money.

“What we're looking for is the best value to the government, as a whole,” said Ginny Dierich, chief of the military branch of the Seattle District of the Army Corps of Engineers. “The MATOC system is more efficient.”

Using the MATOC system, the government looks at several evaluation factors among general contractors, in addition to the lowest bidder. On contracts that will involve several projects, the government asks qualified firms to bid on a “seed” project and the lowest, best-qualified bidders are put on a preferred list for additional contracts.

At a time when the federal government is slashing budgets and looking for ways to run leaner, some local contractors say it's time to do away with the MATOC system and change the way they compete for federal contracts.

Dierich said the process is less “resource intensive” for the government.

But the Associated General Contractors of Washington has stepped into the MATOC debate by requesting that the Department of Defense review the fairness of the MATOC system and report its findings to Congress. The DOD has started the study and will complete its work this fall.

“Fort Lewis is looking to do $2 billion worth of military construction in the next four years,” he said. “Contractors see that money being poured into Fort Lewis, but they don't have the ability to bid on good portions of that work.”

Atteberry said the MATOC system also is used too often.

“MATOC is being relied on more and more and it's kind of overwhelming all federal contracting,” he said. “What needs to be reviewed in this (DOD) study is to what extent are contractors being boxed-out when they're perfectly qualified?”

Rather than using the MATOC system, Atteberry said the AGC of Washington is recommending the federal government use the “unrestricted acquisition program” — taking the lowest bidder — to provide the most open and fair bidding process.

“AGC members and staff have become increasingly frustrated with fewer and fewer bidding opportunities at local federal facilities,” he said.

But Dierich said that using the MATOC system saves time for the government by not having to review a large batch of contractors for each project.

In the initial selection stage, Dierich said the government looks at a bidder's qualifications, and how the bidder will comply with design standards and manage the project's schedule. Having to repeat that process for each project would be more time consuming and require more oversight once construction began, she said.

For Pease, the change to the lowest bidder would give companies like his greater chances. Ironically, Pease said his own company was on a MATOC contract with the federal government several years ago. Nevertheless, he said, “I'm lobbying against it because it's not right for the taxpayer.

Pease said there was a time, during the housing bubble, when contractors were stretched thin due to the abundance of work. But with the economic crisis in 2008 and the ensuing recession, he said government jobs these days can have as many as 20 bidders.

Michael Payne, a Pennsylvania attorney and executive director of FedCon Consulting, which helps contractors prepare proposals, recently said in his blog that the MATOC system unfairly penalizes many contractors who aren't skilled at proposal writing.

With the recent debate over the national deficit, Atteberry said there's renewed awareness in the federal government that budgets need to be scrutinized.

“Congress has recognized that there might be a problem with the over-reliance on MATOC and limiting the field of contractors eligible to do federal work,” he said. “Billions of dollars are on the line. Let's make sure we're spreading the dollars around to give taxpayers the best deal.”

Having done federal work for nearly 30 years, Pease said his firm should be in the running for a slew of federal projects.

“Even though we have a good chance of getting MATOCs in the future, we're still lobbying against it because it's not right for the taxpayers and doesn't help the local economy,” he said.

Dierich said, “We recognize that the (MATOC system) does reduce the number of times a project goes out for competition.”

But she said that the government still selects the lowest bidder, just from a smaller pool. “At the end of the day, it's about the best value to the government.”