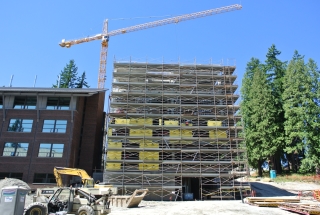 The $62 million Science and Academic Building at the University of Washington Bothell campus couldn't have been a more complicated project.

The building steps up a hillside and houses teaching laboratories, classrooms, a lecture hall, audiovisual-intensive collaborative spaces and offices. Its exterior demonstrates a natural phenomena called the Fibonacci sequence.

Lean business practices, originally devised by manufacturers to increase efficiency, made the project less cumbersome and produced significant savings. All it took was a willing owner, a cooperative project team and the software to do it.

After a planned 2011 start, the state cut funding for the project. In 2012, work finally started with the understanding that the construction team start that summer, finish by 2014 and adhere to a tight construction budget of $42 million.

Efficiency started with the UW, which put language in the contract that “introduced terms that made it clear we expected a cooperative kind of relationship between all parties,” said Steve Tatge, assistant director of the Major Projects Group at the UW.

The university plans to use the same contract type when it begins renovations on Fluke Hall. “It will soon be the new normal, at least on bigger contracts,” Tatge said.

Collaboration started early in the design process, with Aske traveling weekly to Portland to discuss the details with project architect, THA Architecture.

Lewis integrated all trades into a BIM model for clash detection and optimization of each scope. Some trades took over their own design coordination process, skipping the traditional final portion of document design and moving straight to shop drawings, saving 15 weeks for that activity.

“We had as many trades as possible modeling their work, which really optimized the schedule,” Aske said.

One way to measure the effects of the team approach is the cost savings on the project. The university measured the project's structural package against three other recent UW projects. The average cost of changes on the past projects was $1.93 per square foot and at Bothell it is 35 cents per square foot. At 74,000 square feet, that is $116,000 in savings.

It is common for more than 15 percent of mechanical installations to need reinstallation due to conflicts with other systems. At Bothell, there has been nearly zero rework, according to Aske. Just four sprinklers needed to be relocated, all because they had not been installed per plan.

Rather than the traditional method of storing materials on-site, the team has used just-in-time delivery to keep the site clear.

Digital communication tools are speeding communication among all parties, and greatly reducing the cost and space devoted to paper. Drawing updates are made in the model and available online immediately via Lewis' WebPM portal.

“With the usual process, the contractor is usually two or three decisions past that stage by the time everyone has reviewed the drawings,” said Jason Collins, associate principal with PCS Structural Solutions, the structural engineer on the project. To date, digital updates reduced paper use by more than 75 percent.

“We've been using virtual design for several years,” Collins said. “What is different about this building is that the technology delivered on its promise.”