Woodworker builds camp wagon like those used by Basque sheepherders

By SUSAN PARRISH
The Columbian 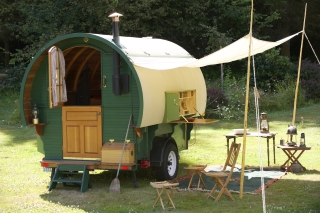 The round-topped horse-drawn wagon had been abandoned in a field near his family's home in Barwick, a village in southwest England.

“It was neat because it had a stove and bunk beds,” Robins said. “We used it as a den and played all sorts of games. It's always stuck with me.”

Decades later, on a trip to Utah in 2008, Robins came upon a “beat-up old carcass of a sheepherder's wagon,” he said. “I liked the simplicity of it and the fact that it was made almost entirely of backyard junk.”

Basque sheepherders probably had built and lived in the wagon. Now derelict and abandoned in the desert, it housed pack rats, and probably rattlesnakes, Robins said. But it, and his childhood memories, sparked him to consider building his own sheepherder's wagon.

In his travels in the West, he had seen other wagons built in that style, with the rounded roof reminiscent of a ship. On his annual trips home to rural England, he sometimes saw draft horses pulling wagons similar to the Gypsy wagon that still lived in his memory.

An experienced woodworker, Robins grew up surrounded by uncles who were craftsmen.

Though he had the desire, he lacked the space to build such a large project. Instead, he built furniture and remodeled his family's house.

When he retired as an archaeologist for the Navajo tribe in Arizona four years ago, he moved his family to acreage north of Battle Ground. Finally, he had space for a large workshop and the wagon project. He's worked on it for four years, mostly in the winter. He estimates his cost at $6,000. Of that, he spent about $1,000 for the fiberglass for the roof.

Designing his own plans, he built the wagon on an 8-foot-by-5-foot utility trailer. He originally designed a fold-down wagon that would fit in his garage, but that proved to be complicated. His new workshop has a 15-foot door, so he built it and stores it there.

He bought some wood and materials new, but the rest he purchased at estate sales and salvage shops. He found some material at marine supply stores. Most of the brass hardware comes from England.

Inside, the wagon is 7 feet high and 7 feet wide. The structural framework is Douglas fir. At Aurora Mills Architectural Salvage in Aurora, Oregon, he bought a stack of wide, old-growth spruce, which he milled into tongue-and-groove style for the front and back of the wagon. At the same shop, he discovered birds-eye maple flooring, which he refinished.

A double bed for Robins and his wife takes up the back half of the wagon. It's topped with Hudson's Bay woolen blankets, the same kind that were traded at Fort Vancouver nearly 200 years ago. A solar-powered fan over the bed vents fresh air into the camper. The bed is elevated to make optimum use of the space.

Underneath the bed, Robins built cabinets and a pull-out table. Tucked underneath is his daughters' bed, a kind of cupboard-under-the-stairs reminiscent of Harry Potter. A colorful curtain provides privacy.

Daughter Pei, 15, has outgrown the bed, but Sadie, 11, still sleeps in the cozy space.

In the front half of the wagon, upholstered benches lift for storage and become seating for the table. He's added a roll-top cabinet to carry his daughters' beading and other craft supplies.

Robins needed a tiny wood stove to heat the wagon. His research led him to Cylinder Stoves, a company that makes stoves for tents. At his request, they shipped a stove to him in pieces so he could cut it down to fit the space. Then he paid to have it welded together. A few sticks of kindling added to the firebox quickly warms the wagon.

On the back deck he added a storage box, which houses a 12-volt deep cycle battery for charging his cellphone and operating a reading lamp over the bed. The box also houses the combustion air vent for the wood stove.

Robins built a kitchen box that stows under a ledge for travel, and hooks to the side of the wagon for use. The door folds down to make a table/work space.

Towing the wagon was easier than Robins had expected, “even in a fairly strong wind, with the total lack of aerodynamics,” he said.

On a 1,500-mile round-trip, “gusty cross and head winds, along with heavy rain at times put the wagon through some serious stresses on the highway,” he said. “With the exception of some leaking around the bay window, everything held up fine.”

When the family makes camp, Robins sets up an awning over the camp kitchen and chairs. On a table away from the wagon for safety, he sets up another reminder of his childhood: an old Svea 123 Primus stove. On a recent camping trip, Robins relished a cup of coffee brewed on the Swedish stove while his family slept.

“After three years in the shop, it's moments like these that make it worthwhile,” Robins said. “We always had a Primus stove camping when I was growing up,” he said. “Even when we went on a car trip, the folks would pull off along the side of the road, fire up the Primus, and make a cup of tea somewhere around the halfway point. We were not unique in this regard.”

In his blog, called Vardo Sheepherders Wagon, Robins chronicles the building process, his family's camping adventures and his passion for Basque sheepherder's wagons, and old-time tools.

A Vardo is a traditional horse-drawn wagon that was home to British Roma people, or Gypsies.

Passionate about antique tools and old-time ways, Robins volunteers as a costumed interpreter in the carpentry shop at Fort Vancouver. With a friend, he built a foot-powered lathe that he uses to teach people old-school woodworking. Now he's learning tinsmithing, which he said is “another old craft that's almost forgotten, but not quite yet.”

After his family's maiden camping voyage in July 2013, he wrote: “Having the sun come up one morning and light the interior was a moment that made all the hard work worth it; that and my daughter's delight at sleeping in the lower cozy bunk bed.”

In his sheepherder's wagon, Robins displays an old black-and-white photo of his Aunt Doreen, perched on the steps of the abandoned Gypsy wagon where he played as a boy.

“You know how those childhood memories are,” Robins said.