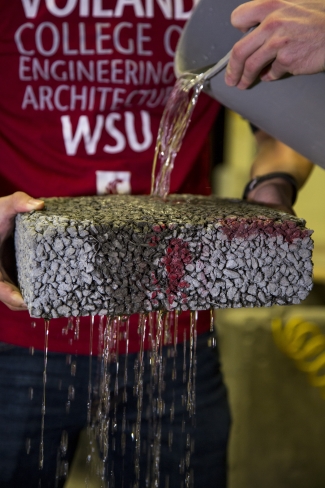 As a civil engineer and expert in composite materials, Karl Englund has high standards for what he can achieve in the area of recycling.

It's frustrating, he said, to see reusable materials end up in landfills.

“There's a lot of good material out there that we're throwing away,” said Englund, a research professor at Washington State University. “We need to get to zero-waste.”

Though zero-waste is the holy grail among recycling advocates and is years or generations away from wide-scale support, Englund is making strides toward reusing materials such as carbon fiber composites for porous asphalt and concrete.

Washington State University is working with Boeing on research that would create porous asphalt and concrete by reusing carbon fiber discarded from Boeing.

With a $212,000 grant, WSU, through the Washington Stormwater Center, is exploring the benefits of integrating carbon fiber into porous concrete and asphalt.

Such porous materials, Englund said, would improve water quality by allowing stormwater to seep through permeable pavement rather than being collected in traditional methods like stormwater systems — thus reducing stormwater flow, filtering pollutants and returning water to the water table.

Initial lab tests have shown that carbon fiber has the potential to make porous asphalt and concrete a viable product that could be used in public and private projects, according to Englund.

Pervious materials for roads, paths, sidewalks and parking lots have advanced greatly in recent years and have been used by designers and engineers as a key component in the LEED rating system.

But using porous materials for heavier traffic purposes such as highways has been a challenge, he said.

“One of the problems is that porous (asphalt and concrete) materials have not been very durable and have the tendency to break down, so that's why there's not been widespread use of them.”

With the addition of carbon fiber, however, he said the products have demonstrated much greater durability. 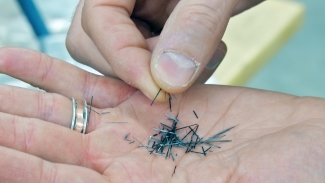 [enlarge]
Researchers are focusing on specific carbon fiber lengths to get the strongest pavement mix.

The challenge for researchers at the Stormwater Center — which is a collaboration between WSU and the University of Washington, with locations in Puyallup and Tacoma — has been to determine the right amount of carbon fiber to add to the mix and how to break down the carbon fiber from sources such as Boeing.

Stormwater Center director John Stark said the new research could be “a game changer in terms of reducing the impact of pollutants in stormwater on the environment.”

He said early results of the testing look promising.

Early experiments with the recyclable carbon fiber products from Boeing have focused on using hammer mill grinders, shredders and granulators to screen out the fiber, Englund said.

“We're sort of shooting from the hip,” he said, in terms of deciding how much carbon fiber is needed in the process. “We're not exactly sure how long the fibers should be and how much to add to the mix.”

Haselbach said researchers have had “mixed results, depending on what size (carbon) fibers we use,” and finding the exact length and strength of the fiber has been a key focus.

“Medium-sized fibers have improved strength and durability characteristics” in the porous products, she said.

Haselbach said the amount of carbon fiber needed to improve durability is “a couple percent by volume” — meaning that it takes relatively little carbon fiber to make a big difference in durability.

She added that she believes there is a potential for widespread use if researchers can make products durable enough for industry standards.. “There is a market for pervious concrete,” she said. 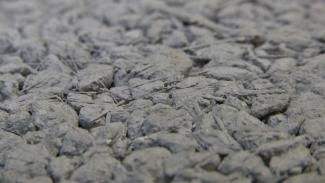 Englund said while Boeing has a highly efficient manufacturing process with its widespread use of carbon fiber on its planes, inevitably there is a waste stream of carbon fiber that could be put to use in porous concrete and asphalt. Separating the carbon fiber from resins is one of his challenges, he said.

As with all recycling strategies, Englund said the goal is to minimize the amount of energy needed to make the waste product reusable so there is a net environmental benefit.

“We're trying to do something that is streamlined to minimize the cost of recycling, because that's ultimately the biggest issue,” he said.

Englund added that costs are high for dumping at county landfills, so waste product generators such as Boeing have an incentive to reduce their waste streams.

“The economic benefit has to be there, to take the material and turn it into something useful,” he said.

While the initial research findings are positive, Englund said researchers must still find the best formulas to reach maximum durability.

He said researchers are writing up their findings and will be exploring more avenues for carbon fiber reuse when additional funding is approved.

Stark said that, with initial research complete, “We would like to conduct a multi-year project, which would require additional funds.”

As a devout fan of recycling, Englund said he would like to see more funding directed toward recycling research. But he said getting funding can be a challenge in an era where cutting-edge fields such as nanotechnology draw more funding. He said recycling research should be better recognized for its societal benefits.

“Everybody's talking about recycling, but there's not as much money being put toward it,” Englund said. “It's a mindset of our society that we need to change.”