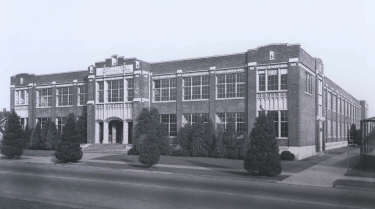 Photo courtesy of DLR Group/Tacoma Public Schools [enlarge]
This is a historical photo of Tacoma’s McCarver Elementary, which was completed in 1925. The school is undergoing a renovation.

A $39 million renovation of a Tacoma elementary school uncovered a surprising detail from its past: the nearly century-old footprints of its builders.

McCarver Elementary was completed in 1925 atop the site of a former University of Puget Sound building at 2111 S. J St. (The university, then called the College of Puget Sound, moved to its current North End site in 1924.)

The three-story, 83,000-square-foot McCarver was built as the one of the country's first intermediate schools, but has seen several renovations over the years, and was converted to an elementary school in 1968.

The building is listed as a Tacoma historic landmark.

Al Martin, the project manager for Skanska USA, which is undertaking the current renovation, said the structure had been showing its age. Its mechanical systems were dated, it had no air conditioning, and drop-ceiling tiles concealed original plaster architectural details.

The renovation will bring the school up to current codes and educational standards.

Work, which started in June, involved stripping the old wood floors on the second story. The concrete slabs underneath still bear the footprints of the workers who placed them 92 years ago.

Martin said contractors, using the rudimentary methods of the time, didn't have a whole lot of time to do their work. Contractors would walk across the concrete while it was still setting so they could insert clips for the flooring.

Skanska crews will redo the wood flooring, but leave the concrete pretty much as is.

“We didn't really add any concrete on top,” Martin said.

“They'll still be under there,” he confirmed. 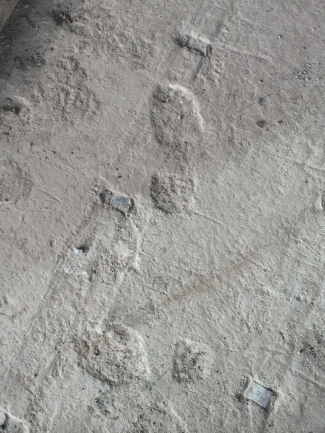 The renovation will provide the classrooms with all-new flooring, walls, windows and audiovisual equipment. New skylights will be installed, along with an elevator and staircase, seismic improvements, and electrical and mechanical systems. The school will also have a new kitchen and a community resource center with a separate entrance and controlled access to the rest of the building.

DLR Group is the architect.

Martin said returning teachers and students will notice the school is more open and has better circulation. Still, the school will retain its historic character, thanks in part to restored plaster in its two-story atrium and inside the stairwells, and the retention of the original wood doors and staircases.

Some of the preservation work will undo changes from previous renovations, such as when the old skylights were removed and roofed over. Also, some of the original plaster removed in the early 1970s to install drop ceilings will be replaced.

The exterior will get touched up, too, Martin said. A new roof system will be installed, and masonry will be cleaned and deteriorating masonry joints will be covered up.

Martin said the most challenging part of the project has been discovering differences between the plans and what actually got built.

“Not everything is exactly what it was on paper,” he said.

So when crews go to fabricate new elements, they have to make sure the elements will fit correctly, he said.

“Footings weren't where we thought they were,” Martin said, “and we noticed a lot of areas where the brick depth was off.”

McCarver is scheduled to reopen for the 2016-17 school year.

Martin said the project has been enjoyable because it offers a chance to recreate some history, “but with modern amenities.”