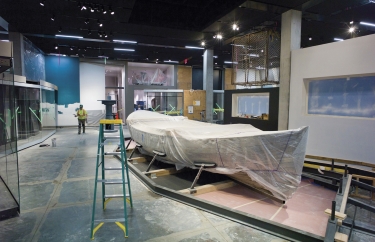 JUNEAU, Alaska — From Willoughby Street, the State Library Archives and Museum Building looks mostly finished, tempting passers-by with glimpses of an interestingly patterned wood ceiling through its huge second floor windows. But inside, it's a serious construction zone, humming with noise and activity as PCL Construction workers, specialty contractors, and SLAM staff members busily fulfill diverse roles in different parts of the building.

The $138.4 million, 118,000-square-foot facility is scheduled to have its opening on May 15, with an official ribbon cutting ceremony June 6. The project is on time and on budget.

During a recent media tour, SLAM director Linda Thibodeau, deputy director Bob Banghart and project engineer Jennifer Pepin of the state Department of Transportation and Public Facilities provided an early look at what Alaskans and visitors have to look forward to when the doors officially open. Here's a brief overview of what we saw.

On first entering the building, visitors come in to the atrium, a dramatic high-ceilinged lobby that includes a new eagle tree and staircase at the far end, and a giant, detailed map of Alaska integrated into the floor. Overhead, a sky bridge connects the second floor reading room on the left with administrative offices on the right.

A small cafe sits to the right of the entryway, and, across the lobby, a store. Behind the store, along the front wall, is the new Science on a Sphere room, a purpose-built space tall enough to allow the sphere to be retracted toward the ceiling. (Developed by NOAA, Science on a Sphere is a three-dimensional global display system that uses computers to project information onto a globe.) Also in the lobby area is an auditorium and a classroom.

The museum's permanent gallery opens off to the left of the lobby. Immediately inside the exhibit hall doors is an orientation area and a section on Alaska's “origins.” A Tlingit clan house, set at an angle to the door, will introduce visitors to the Tlingit, Haida and Tsimshian cultures of Southeast. Constructed of hand-adzed cedar by a team overseen by Todd White, project manager on the Chief Shakes restoration project in Wrangell, the clan house will include a central (digital) fire pit and soon-to-be installed drawers that visitors can pull out to reveal artifacts, as well as weavings.

Farther along the exhibit floor are areas devoted to Athabascan, Yupik, Inupiaq, Aleut and Alutiiq peoples. At this point the sole artifact in this area is a walrus-skin Inupiaq umiak, a 34-foot boat whose frame was built around 1920 by Jonathan Onalik in Wales. Pepin said the delicate umiak was among the last items to be removed from the old museum and the first to come in the new one.

“We actually had to move in some of the artifacts before we finished building the (exhibit hall) walls, and that was one of them,” she said, gesturing to the umiak.

Along the back wall will be exhibits devoted to exploration and contact. An area devoted to resilience highlights the fact that Alaska's indigenous cultures didn't fade out after contact, but rather adapted and found ways to thrive in a changing environment.

Creative adaptive technology “from the very beginning of man's inhabitance until now” is one of the overarching themes of the exhibit floor, Banghart said, as is the idea of self-reliance.

Around the corner from the resilience section are areas devoted to resource extraction and maritime history, respectively anchored by two major pieces already in place: a segment of the Alaska pipeline and a Bristol Bay double ender (a single-sail wooden fishing boat). The latter was shipped up from the Center for Wooden Boats in Seattle, and, according to the CWB, represents one of the finest examples of the work of the Davis family of Metlakatla. The double ender will be displayed with a new sail created by Ketchikan sailmaker Louie Bartos.

Next to the maritime section are exhibits on World War II, political history, transportation and modern Alaska.

In the center of the exhibit floor is the children's Discovery Room, which will include a brand new boat, currently in progress, and a vinyl floor featuring a mother humpback and her calf. The children's area is enclosed by a glass wall.

Immediately adjacent to the permanent gallery are three spacious temporary galleries, where rotating exhibits will be shown. Banghart said the museum has not yet opened the application period for solo shows, but has a number of early exhibits planned, including the Alaska Positive Statewide Juried Photographic Exhibition and the All-Alaska Biennial.

On the second floor, above the museum exhibit space, is perhaps the most dramatic room in the building, the Richard Foster Reading Room. (Former Rep. Foster, from Nome, was a frequent visitor to the state library and archives.) The reading room includes a soaring wood ceiling (now visible from the street) and huge windows overlooking town and the mountains. At the time of the tour, the library stacks had not yet been installed.

Vibrant multicolored cast-glass panels, designed by Portland artist Walter Gordinier, have been placed at intervals along the interior, lobby-facing wall of the reading room, and are visible from below; Gordinier will soon have other pieces installed elsewhere in the building. At the back of the room, between the library's reading and research areas, a glass and wood panel by Ketchikan artist Evon Zerbetz will be installed. This will be Zerbetz' first piece in this medium. Gordinier and Zerbetz' artworks are two of the SLAM building's three pieces in the Percent for Art program; the third will be nine hand-built benches created by Martin Shelton, yet to be installed on the mezzanine level.

In addition to SLAM's public spaces, the building has numerous “back of house” staff areas, including paper and object conservation labs, a micrographics department, electronic records area, and a wood and metal shop that Banghart called “the best shop in town.”

“We can build anything short of thermonuclear devices (in here),” he joked.

SLAM director Thibodeau said in addition to working together on the physical building, the previously diverse departments of the state museum, library and archives have been learning to work together toward a common goal — a development that promises long-term benefits for both staff and the public.

“It's been a real team-builder for us,” she said. “We have a team that we didn't have when we started this and we'll have it when we finish. We won't just have a building. We'll have a more integrated vision.”

Banghart agreed, adding that perseverance is among the challenges of a project of this scale.

“It's a difficult thing sometimes for people to grab a hold of a project and understand that it's a five-year commitment to staying focused,” he said.

As staff and others prepare to share this major addition to Juneau's cultural landscape with the public, the energy in the building is palpably positive. Asked if the project was shaping up the way he envisioned, former museum curator Paul Gardinier, who has been working as a contractor on the design of the exhibit floor for the past three years, responded with a wide grin.

“Even better,” he said. “I'm ecstatic with how it's progressing.”

The SLAM building is officially known as the Father Andrew P. Kashevaroff State Library, Archives and Museum Building, named for the first librarian and curator of the Alaska Historical Museum and Library.