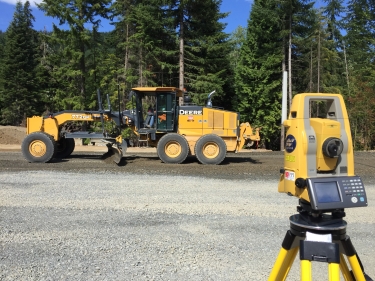 Photo from PPI Group [enlarge]
A Topcon local positioning system was used on this Interstate 90 project to automatically guide the blade on the road grader.

At Barghausen Consulting Engineers, keeping up with the latest, greatest technology is a matter of professional survival.

That comes, according to Dennis Saltys, at a high cost.

“We can spend $25,000 or $35,000 on surveying instruments,” said Saltys, director of surveying services at Barghausen in Kent. “We're on a two- to three-year turnover cycle with our instruments, depending on the nature of our work. We're running 10 crews, so it's a significant investment.”

One of the Northwest's largest surveying equipment suppliers is PPI Group, which has an office in Kent and is based in Portland. Tigue Howe, president of PPI Group, said one of his company's chief missions has been to remain at the forefront of constantly changing technologies that redefine the role and importance of surveying equipment for surveyors and contractors in the Northwest and United States.

Looking back on PPI Group's 90-year history, Howe said the company is fortunate to have been at the right place at the right time.

“We've been incredibly lucky when it comes to picking our path and business direction,” said Howe, who has been with the company for 40 years. “We just happen to be the longest (lasting) company around doing it. Our market now consists of everybody having anything to do with land development: surveyors, contractors, civil engineers and architects.”

PPI Group lists as its local clients Absher Construction Co. and Lease Crutcher Lewis in the general contractor field, and Barghausen and Core Design in the surveying field. Architectural clients include LMN and GGLO.

Howe said what makes PPI Group unique is its range of services, which includes the sale of surveying equipment as well as the sale and servicing of the application software for surveying and design. “No other one company has put those together,” he said.

“You can't survey land if you're not a licensed surveyor, and there are strict laws for land surveying,” said Howe, “but the tools of the trade can still be used by contractors for their own purposes. Nothing makes it illegal for contractors to use surveying instruments.”

Howe said he arrived at PPI Group just as the digital age started. Technological advances in the late-70s brought electronic distance measuring — a big leap from using steel measuring tape — which allowed land surveyors to use infrared lasers shot up to five miles away to determine distances.

“That was a huge revolutionary shift and a monumental game changer,” said Howe.

By the 1980s, Howe said surveyors were able to take data from electronic distance measuring machines and store it at the construction site on a computer called the field controller. For PPI Group, that technological advance meant that the company could begin selling software to store and decipher data from surveying equipment.

The advent of CAD software brought further product expansion for PPI in the 1990s and by the mid-90s GPS technology gave surveyors added accuracy.

Bob West, a surveyor with Core Design of Bellevue, said the technology and equipment that PPI Group sells has become faster and more accurate.

“If you think about 20 years ago, everything was analog and now everything is digital,” said West. “We can transfer files remotely and process data from the field faster and more efficiently.”

Having seen 40 years of technological advances, the 61-year-old Howe said “the latest, greatest technology still excites me.” Howe began at PPI Group in the shipping/receiving department and is now part owner.

“It's not like we're selling groceries,” he said. “Because of computer advances, five years from now we'll be selling different products. It's constantly evolving. We thrive on that technology.”