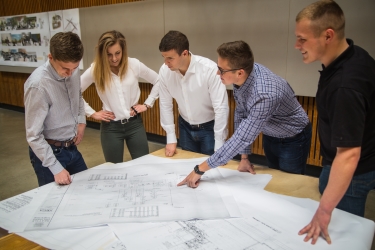 The Seattle Children's Theatre is regarded as one of the nation's top children's theater companies. Its home at Seattle Center was completed in the mid-1990s and a pavilion was added in 2000.

But the building, part of which was originally built in 1956, is not as energy efficient as it could be. The theater has been looking into making improvements, but hasn't settled on a scope or budget.

So it was a happy coincidence when a team of six University of Washington construction management majors contacted SCT earlier this year and asked if they could work with the theater as part of a contest to design an energy upgrade.

The competition is called the 2017 Green Energy Challenge, sponsored by the National Electrical Contractors Association (NECA) and Electri International. Student NECA chapters in the U.S. and Canada must work with local electrical contractors to respond to a request for proposals prepared by the contest organizers.

The rules this year require students to craft their proposals to meet the needs of a local facility that provides community services.

UW team captain Kelli Desrosier, a junior, said that with the 2017 NECA convention set to be held in Seattle, her team wanted to choose a facility that would showcase the city's culture and character.

They decided on Seattle Children's Theatre, she said, since it's a cool building that has played a rich part in Seattle's history, and has a positive effect on the lives of young people.

The student teams received their RFPs in February and have until May 1 to submit their proposals.

The contest requires students to respond with detailed technical proposals for their energy upgrades. Their to-do list includes drafting plans for a lighting retrofit with integrated window treatments/controls, a 4-5 kilowatt photovoltaic system, and an energy-efficiency upgrade that responds to the needs of the building and local climate.

The students' submittals can run 40 pages — 50 with appendices, according to the rules. They're evaluated on the quality of their project summaries, technical analyses, schematic estimates, schedules and finance plans. Points are also awarded for community service, outreach and work with local NECA contractors.

Teams can even earn points for publicizing the contest in a newspaper. (We're happy to help.)

Michael Wellborn, production manager for SCT, said the students got in touch with the theater “at a very timely window for us.”

SCT is in need of a variety of updates, he said, such as significant HVAC and energy conservation measures. Some of the those needs are a result of years of wear and tear, and others are because of technological advancements.

“We're definitely looking forward to the output that the student team put together,” Wellborn said.

The students in their project summary said they conducted an energy audit of the building and will make recommendations on how to reduce its overall energy use.

Their work includes developing a lighting retrofit package of new fixtures and creating a new floor plan that reflects the design of the new lights.

One of SCT's main concerns was to ensure the saturation temperature of the lights in the shop areas matched that of the stage so the props don't look different during productions. So the students accounted for this in their design.

Other tasks included designing a window glazing/insulation system and a photovoltaic system. In each case, the students worked to show how much energy the new system would save.

They also had to develop a construction schedule and staffing plan, taking into account real-world issues such as site logistics, safety, traffic plans, site deliveries, and staging and storage. From there, they prepared a full estimate that included financing plans and a cash-flow/payback plan for SCT.

Desrosier said her team split up the work as they prepared their proposal. She was the chief estimator and also focused on lighting. Other students took on roles focusing on lighting design, energy analysis, alternative energy, scheduling and outreach/volunteer coordination.

The team has received advice along the way from a number of contractors, including North Coast Electric, Sequoyah Electric, Cochran and Lutron.

That's music to the ears of Chris Reigelsperger, director of services for NECA's Puget Sound chapter.

“We've had a pretty close partnership with the University of Washington for many years,” he said.

The chapter's 50-plus contractors make themselves available to answer the students' questions, provide feedback on their proposal, and even take students to walk around projects.

“It exposes students to some of the real leaders of the industry,” he said.

The exposure goes both ways: Contractors get to meet with students who have already committed themselves to their field.

“There are students in the competition (in previous years) who have gone on to work for our contractors,” Reigelsperger said.

Team members earn a school credit for their participation, but the real value is “you learn so much from these projects,” Desrosier said.

Not only is she learning new construction management skills, she said, but she's “trying to make deals with actual suppliers, going out there and building relationships and organizing these projects like you would in the real world.”

The contest doesn't require anyone to actually build the project, but Wellborn at SCT said he hopes to use the students' proposal to help with budgeting, timeline and other planning issues. He'd also like to be able to share it with vendors.

The student proposals will be evaluated by a jury made up of contractors and manufacturers. The top three teams will be invited to the annual NECA convention in October to give an oral presentation and receive a grilling from the judging panel.

Desrosier and her teammates will find out in July whether they made the cut.

They're following in the footsteps of other UW teams that have found success in the annual contest. UW last won in 2013, but has been among the top three finalists five other times since the contest's launch in 2009. UW won that year, too.

Desrosier said she was an alternate on last year's team, which finished second to Iowa State, and is ready to do even better this year.

“I'm really competitive,” she said. “I really like to win.”

Regardless of how the team fares, she has her eye on a bigger prize: a career as a full-fledged project engineer. Maybe even returning to renovate Seattle Children's Theatre for real, she said.