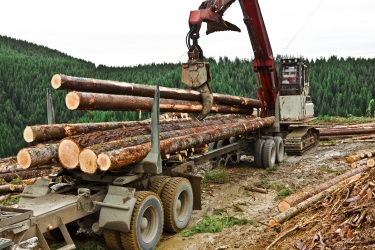 iStock image [enlarge]
The Lower Joseph Creek Restoration Project is expected to make up to 7.5 million board feet available for harvest, and is part of a larger effort to increase the pace of forest restoration.

PENDLETON, Ore. — Accelerated restoration is coming to the Wallowa-Whitman National Forest, including an increase in logging and burning.

The U.S. Forest Service has approved a massive proposal to treat more than 100,000 acres on the Wallowa Valley Ranger District north of Enterprise, part of a broader regional effort to increase the pace and scale of forest restoration across Eastern Oregon and Washington.

Tom Montoya, supervisor for the Wallowa-Whitman National Forest, signed a record of decision for the Lower Joseph Creek Restoration Project on Friday. Activities will include more than 16,500 acres of commercial logging and fuels reduction, and up to 90,000 acres of prescribed burning over the next decade.

It is the first major project to be completed by the Blue Mountains Restoration Strategy Team, a group of local Forest Service employees that formed in 2013 to step up restoration, make landscapes healthier and lower the risk of devastating wildfires.

But the plan isn't without controversy, as stakeholders continue to wrestle with the environmental and economic impacts of such a large effort. The project garnered input from Wallowa County, the Nez Perce Tribe and the Wallowa-Whitman Forest Collaborative, consisting of both environmental and timber industry representatives.

Montoya admits the parties did not reach a perfect consensus, but said he is pleased with the result.

“This project, safe to say, is a priority not only for this forest, but for the region,” Montoya said.

The Lower Joseph Creek Restoration Project began with a 2014 watershed assessment by the Wallowa County Natural Resources Advisory Committee, which identified 20,000 acres of forestland at very high risk due to heavy fuel loads and overstocking of trees that could be commercially logged.

Another 21,370 acres were recommended for thinning smaller trees, for a combined estimated value of more than $67 million.

The Blue Mountains Restoration Strategy Team decided to take up Lower Joseph Creek under the umbrella of accelerated restoration, making forests more resilient to things like fire and disease while also protecting natural resources and supporting the local economy by boosting timber production.

The project area is located on the northern boundary of the Wallowa-Whitman National Forest, and includes portions of the Hells Canyon National Recreation Area. Joseph Creek provides critical habitat to Snake River steelhead, which are listed as threatened under the Endangered Species Act.

Ten different groups and individuals filed objections with the Forest Service after the agency released its draft decision for Lower Joseph Creek last year. Montoya said they were able to work through some of their disagreements — such as roadless-area conservation and limiting the size of trees that can be harvested — but not everything.

“My goal was to see if we could move a little closer to meeting everyone's thoughts and concerns out there,” Montoya said.

Neil McCusker, a silviculturist with the Blue Mountains Restoration Strategy Team, said the natural condition of local forests has changed over time.

As fire suppression has improved, McCusker said the forest is becoming increasingly dense — as much as 10 to 20 times in some areas of the Lower Joseph Creek watershed. Higher density means more fuels for fires to become large infernos, and has even changed the composition of tree species, allowing shade-tolerant firs to expand significantly.

The Lower Joseph Creek Restoration Project will involve cutting trees across roughly 17,000 acres and using prescribed fire on up to 90,000 acres to bring the forest back in line with historical conditions, McCusker said.

“Really, the focus is on thinning all age classes out on the landscape and retaining old trees wherever they may be,” he said.

Paul Boehne, fisheries biologist for the restoration team, said they primarily looked at treatments around streams that do not contain any fish populations. These riparian areas are mostly located at higher elevations, he said, and make up 20-25 percent of any given watershed.

But even though the streams do not host fish, Boehne said they serve an important ecological function, providing cold water and filtering sediment where fish do swim.

“That's the value of those large trees standing in the riparian habitat conservation area,” he said. “We want to protect those.”

Boehne said the Lower Joseph Creek project will not touch old growth trees in riparian zones, and foresters will work to maintain a minimum level of canopy to ensure the water doesn't get too warm, and snow doesn't melt too fast.

More controversially, the project aims to treat 31 acres around Swamp Creek, a tributary of Joseph Creek that does support steelhead. Boehne, however, argues the work is justified, citing lodgepole pine trees that have encroached in the area.

“They shouldn't be there,” he said. “It should be a wet meadow that stores water like a sponge.”

Instead, Boehne said those trees are sucking up water that would otherwise filter back into the stream for fish. Ultimately, Montoya agreed in his decision.

“I felt, based on specialists, that we needed to do a little bit of work in Swamp Creek,” Montoya said.

Several environmental groups have expressed concerns with the plan, though they are continuing to review the details of the final proposal before determining the next steps.

Rob Klavins, Eastern Oregon field coordinator for Oregon Wild, said the organization has spent hundreds of hours over several years to find common ground on the project. The Forest Service, he said, continues to use restoration to treat symptoms in the forest, rather than addressing the underlying management issues.

“Given the politics and special interests behind it, it's been clear for some time that come hell or high water, this project was going to go forward, push boundaries and test the limits of public trust,” Klavins said.

“Joseph Canyon is a magnificent place,” Kelly said. “Hells Canyon Preservation Council has worked incredibly hard through the Wallowa-Whitman Forest Collaborative to find solutions for this project. We are extremely disappointed that those efforts apparently did not succeed.”

Darren Williams, a staff attorney for the Nez Perce Tribe, said they are still reviewing the final decision and were not ready to comment.

Lindsay Warness, forest policy analyst for Boise Cascade, said the company was disappointed that the Forest Service removed an amendment that would have allowed the company to cut 21-inch-diameter trees under certain circumstances, but overall feels it is a good project.

“We're happy to see it finally come out,” Warness said. “It's been under consideration for a very long time.”

Boise Cascade will bid on timber sales, the first of which is expected to be prepared by the end of 2018, according to Montoya. In all, the Lower Joseph Creek Restoration Project is expected to make up to 7.5 million board feet available for harvest and support 50 jobs.

Of Boise Cascade's five Eastern Oregon plants, only the plywood facility in Elgin is operating at full capacity. As it stands, Warness said the company imports wood from up to 250 miles away. The Umatilla and Wallowa-Whitman forests would need to triple its allowable harvest for Boise Cascade to maintain current mill infrastructure, she added.

“We need a sustainable supply of material from these national forests,” she said. “We need to have more of these projects going at the same time across the northern Blue Mountains.”

Moving forward, the Blue Mountains Restoration Strategy Team is now working toward an even bigger project that would target 1.2 million acres on the Umatilla, Wallowa-Whitman and Ochoco national forests. If approved, the proposal would be 13 times as big as Lower Joseph Creek, spanning 13 counties in Eastern Oregon and Washington.