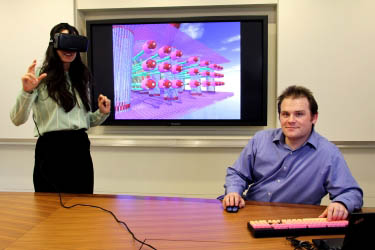 The Washington State Convention Center expansion in Seattle has thousands of pieces of steel that tend to “descend into visual clutter” when viewed as a 3-D Revit BIM model, said Robert Baxter, a structural engineer at Magnusson Klemencic Associates.

But MKA engineers used Oculus Rift virtual reality goggles Baxter brought to work to virtually stand inside the building and look around to better understand how the pieces will fit together, he said.

“It's something that interested me and it turned out to be useful, fortunately,” he said.

MKA purchased the VR goggles from Baxter and bought a Microsoft HoloLens augmented reality (AR) headset, which costs about $3,000. Oculus is about $600.

He said virtual reality is a simulation of a real life environment that immerses users deeply in the experience visually and with sound. Augmented reality blends digital objects into the real world and allows users to interact with the holograms, making the experience more meaningful.

Because a structural engineer's job is to economically ensure buildings and bridges stay standing they must understand how the components fit together, which they can do with 2-D and 3-D models.

But sometimes VR and AR help create a more economical project as they “help us understand the building better,” said Baxter, a senior associate with MKA.

VR is like being in a building as opposed to looking at a picture of one, Baxter said. It offers better depth perception and a larger field of view, and lets you to turn your head to change your view. You could replicate the VR view on a computer screen, he said, but it's not as immersive. However, VR makes some people queasy.

AR is not as immersive as VR, he said, but with the right equipment other people can see what you see and you can have conversations.

MKA, a Seattle-based structural and civil engineering firm, uses the technology once or twice a week to decipher how building elements mesh, to wrestle with complicated sites or to explain things to project team members.

For instance, its civil engineers were viewing an international building project on complicated topography in 3-D on a computer to figure out how the drainage and roadway and other elements would fit.

Then they used the HoloLens to get a better view of the shape and slope of the land. “The first thing a couple of the guys said is that it makes much more sense now,” Baxter said. “It can really help something pop in your mind.”

MKA has employed the tools to show architect clients how building components will look. It plans to use them to give contractors options for fitting together building parts, pieces and components. For instance, a contractor may have to install rebar, pre-stressed tendons, stud rails, and electrical and plumbing conduit at penetrations where a building floor slab and column meet.

The structural engineer is not supposed to tell the contractor how to build, Baxter said, but it can use VR or AR to provide options on where to put and sequence those components.

Baxter learned to use VR and AR via online resources. He said its key is to make sure it can be employed quickly and effectively so it doesn't subtract much time from your other tasks.

To “create” the VR renderings, he said, you export a 3-D BIM model into Unity, a gaming engine that creates a simplified geometric representation of the building. Then you can just look at the space on a computer screen, which is less immersive, or use VR goggles.

With AR, you use software to “push” renderings on to HoloLens.

Both options involve only a few mouse clicks.

On a building project, visualizing where floor beams and columns will go is pretty straight forward, but visualizing where and how many connections should go between those pieces can be challenging because of their different angles, depth and width.

The immersive tools can help engineers better visualize that, so they can eliminate unnecessary connection components and save on material and fabrication costs.

Also, VR is close to the final experience so architects can give a more solid sign-off on aspects of projects, he said.

On a high-rise in Chicago, MKA proposed using angled outriggers to stabilize the main elevator core in some places. But the architect didn't like the angles, and instead wanted a big solid wall from the core to the perimeter columns.

MKA used VR to show the architect the outriggers would not be obtrusive, but it stuck with the wall. Baxter said it helped them decide “based on something that made sense as opposed to ‘We don't like it.'”

Structural engineers who employ the technology will become more aware of how their design fits into the overall project because of the immersive experience they have with the architect, he said.

Mark D'Amato, a co-founder of Seattle-based DCI Engineers, said in the future you could be in a computer simulation with architects and mechanical and structural engineers sharing the same visual reality and manipulating the design based on what is being seen. “We're not there yet,” he said. “(But) we may not be that far away.”

He said his civil and structural engineering firm doesn't use VR or AR. It employs 3-D Revit BIM models, which let the engineer travel through their building project to ensure the design fits together the way it's supposed to, and to see “if something is out of whack.”

CKC can envision using it to give contractors and subcontractors a better understanding of the otherwise hard to convey three-dimensional geometry and spatial relationships of complicated structures, so jobs run smoother, he said, but BIM models would do the job on routine buildings.

Baxter of MKA said he spent just three hours incorporating existing 3-D models of the facade, structure and adjacent buildings to create a virtual reality experience for a San Francisco mixed-use tower on which the firm was working. He said it reinforced that the large column nodes it was designing were appropriate for the scale for the building.

Baxter expects structural engineers to employ immersive tools more in the future as they are getting easier to use and people are more familiar with them. But near term he doesn't envision them being employed exclusively as some tasks don't require that level of immersion. Also, changes can't be made as quickly because the user is one step removed from the Rivet model — something companies are working to address.

When they do, Baxter said he expects the tools to be used more often. “I think that will be the big jump.”