Compton Lumber has been at it for 125 years, thanks to managers with ‘sawdust in their veins' 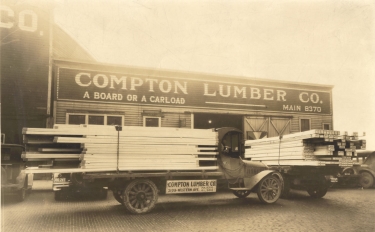 Photos from Compton Lumber [enlarge]
One of Compton Lumber’s earlier locations was near Pike Place Market. It has operated in Seattle’s Industrial District for the past 31 years.

With more than 90 years of experience in the building industry between them, Steve Compton and Mike Matheny are sure they've found their niche.

“We have sawdust in our veins,” Compton said. “We're lumber men. That's who we are and we don't pretend to be anything else.”

As operations manager of Seattle's Compton Lumber, Steve Compton is a fourth-generation member of the lumber company staff, working side-by-side with Matheny, the company's sales manager.

This year, Compton Lumber celebrates its 125th year in business — having weathered more than its share of large and small recessions, as well as the Great Depression. Compton attributes the longevity of the company to an extensive knowledge of what contractors, architects and developers need.

Compton and Matheny said their familiarity with their lumber products gives them an edge over the big-box retailers such as Home Depot and Lowe's.

“We don't sell appliances or have a gardening center or sell lawn mowers,” Compton said. “We are true lumber people. We've both been around the building industry our whole lives and really do know what we're talking about.”

Another secret to success for Compton Lumber, according to Compton, has been the benefit of the company's locations. For all of its 125 years, Compton Lumber has been within seven miles of downtown Seattle. Its current location is in Seattle's Industrial District at 3847 First Ave. S.

Before moving to First Avenue South, the company was on Western Avenue, and it was founded on the former Railroad Avenue — where Columbia Street meets downtown Seattle's waterfront. Railroad Avenue was later changed to Alaskan Way.

The company's original location on Railroad Avenue put it in the right place at the right time, Compton said. 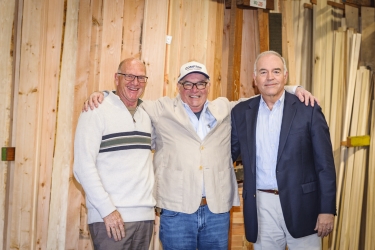 In the early 1890s, when Compton's great-grandfather Horace Compton founded the company, the large lumber mills run by A.A. Denny and Henry Yesler, among many others in Seattle, were having a hard time meeting the needs of “guys who just wanted to buy sticks,” Compton said. Such customers, he said, were buying small quantities and the larger lumber mills preferred to do larger volume sales.

“It got into my great-grandfather's head that he could make a few bucks buying at a discount from the mills and turn around and sell it for more,” he said. Launching the company in 1892, Horace Compton created the first lumber company of its kind this side of the Mississippi, according to Compton.

Maintaining business relationships with institutions such as the University of Washington, which has been buying lumber from Compton for 115 years, has been a key to success in good times and bad, he said. During the hard times, such as the Great Depression and the early 1970s recession in Seattle, Compton said the company's owners used common sense to survive.

“As an organization being run by the family, we tightened our belt and did what was necessary to get through,” Compton said. “When things go slow, you do what you have to to survive.”

The company has maintained a focus on selling building materials such as hardwood lumber, concrete products, doors, flooring, decking and insulation. Its hardwood products are an A-to-Z list from acacia wood to zebrawood, with everything in between.

Over the years, Matheny said, tastes and trends have ranged from red oak in the 1970s, to maple, cherry, Douglas fir and currently American black walnut.

The demand for American black walnut came out of nowhere, Matheny said. 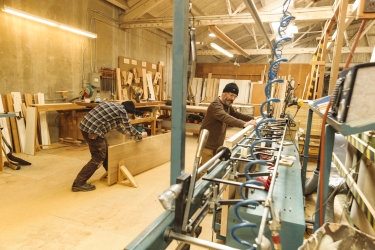 “I contend it was from the ‘Mad Men' TV show,” which was about Madison Avenue advertising execs, where wood on the sets mimicked the late 1950s and early 1960s, Matheny said. “American black walnut sat idle for years and not in favor, and all of a sudden it's in demand,” he said.

Designers who pick up on such cultural trends can influence trends in the lumber business, Matheny said. “That's where architects have such an impact.”

Working often with contractors who come to Compton Lumber with finished plans, Compton said the company's wood experts at times have to break bad news to clients that the wood called for by their architects isn't available or is prohibitively expensive. Lumber from Compton has been frequently used in Seattle's restaurants and cafes, including Starbucks, Tully's and Cafe Vita. The company also has sold lumber for Microsoft projects in Redmond, as well as Amazon projects in South Lake Union.

While in some cases clients come to Compton Lumber with orders, in other cases the company bids on projects. For the Alaskan Way Viaduct replacement project, Matheny said he approached Seattle Tunnel Partners to provide large-timber shoring materials and plywood. After interviews with the contractor, Compton Lumber won the project.

Matheny said a major selling point for his company is quick delivery, which has been critical for the tunnel project. “We can usually deliver materials to them in two hours or less,” he said.

Other Seattle contractors, such as Turner Construction, have relied on Compton Lumber to meet tight deadlines and last-minute requests, Compton said.

“Contractors working in downtown are under tremendous pressure, because it's very difficult to build a 50-story building in downtown now,” he said. “We've been known to make deliveries at seven at night or five in the morning. We've also been on job sites delivering materials at two or three in the morning. You won't find a lot of people who will do that.”

He said the company has five delivery trucks and 26 employees at its two-acre First Avenue South location.

“This is a very competitive business,” Compton said. “We have to be competitive or they're not buying materials from us. When we look at our customer base, we feel it's solid and they are guys we've been dealing with for a long time. It's a tremendous value to them that we are in existence.”