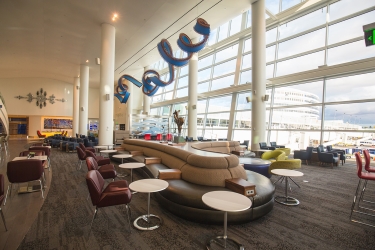 The Lake Union Building at 1700 Westlake Ave. N. has offered tenants exceptional views of the lake and downtown Seattle since its development in the early 1970s.

Kevin McNulty of Metro Property Services, the property manager for the 90,000-square-foot building, said views of Lake Union, Capitol Hill and the central business district were sometimes hard to appreciate due to the glare off the lake.

“With this specific building, there was sometimes too much reflection coming off the lake,” McNulty said. That forced tenants to draw the blinds and miss out on one the building's best selling points, he said.

“Think of it as Transitions lenses for your building,” said Brandon Tinianov, vice president of business development at View Inc., referring to eyeglass lenses that darken in the sunlight. “The glass tints when the sun's heat or glare hits the glass, but prevents the sun's heat from penetrating the space,” he said.

“(The glass) has multiple nano-layers of metal oxide that form the electrochromic ceramic coating on the inside of the glass, and when a tiny electrical charge is applied ions move between the layers, changing its structure and tinting the glass,” Tinianov said.

Although the technology to produce View's “smart glass” has been around for decades, Tinianov said it had never been commercially available on a large scale until View began its production. He said the glass is produced at a factory in Olive Branch, Mississippi, which is just across the border from Memphis, Tennessee.

Tinianov said View Dynamic Glass is an “active” system that coordinates with smart building management systems through a software interface that can be controlled by a building manager or individual building occupants, as weather conditions change throughout the day.

“We've had a lot of positive feedback from tenants,” McNulty said, since the glass was installed in late 2015 as part of a larger renovation of the Lake Union Building. “They love the ability to control the glass with their phones, or have the glass automatically tint. We've noticed a huge improvement in tenant comfort level.”

Christopher Meek, an associate professor of architecture and director of the University of Washington's Integrated Design Lab, said his lab studied the performance of View Dynamic Glass and found that it delivered an 18 percent improvement in energy savings at the Lake Union Building — worth about $28,000 yearly.

“The primary mechanism for energy savings is that the dynamic glass reduces unwanted heat gains, rejecting the sun's heat and reducing the need to run air conditioning,” Meek said. “It does not allow unwanted heat in the summertime.”

In addition, the glass reduced the requirement for lighting by eliminating the need for blinds. “The building's HVAC is more optimized” as a result, he said.

While Meek said his Integrated Design Lab often makes energy calculations on materials that are tested in the lab, in the case of the Lake Union Building his team could do a detailed real-world evaluation. “Nothing takes the place of measuring how things perform in the real world,” he said.

The Lake Union Building, built in 1970, had single-pane windows that Meek said were approaching the end of their service life. He said Henbart was able to “leapfrog conventional technology and bring in something built to the next level,” referring to Dynamic Glass.

Tinianov said the glass has been used in 350 projects in the United States, with another 150 projects underway. He said two other local projects are at the Burke Museum and the Alaska Airlines Board Room.

(Editor's note: The energy savings percentage has been updated.)

“It just takes eliminating one minute of distraction among tenants throughout the day for the dynamic glass to pay for itself,” he said.

At Sea-Tac International Airport's 21,000-square-foot Delta Sky Club, 7,500 square feet of View Dynamic Glass was installed last year, creating a more “relaxing environment that reduces thermal discomfort” for the 400 guests of the club, according to a Delta press release.

The glass eliminates the need for blinds in the club as well as external shading structures, allowing better views of Mount Rainier. Claude Roussel, the Delta Sky Clubs' managing director, said the glass is an architectural showpiece for the club.

At the Burke Museum, a new 113,000-square-foot exhibition building will use about 1,000 square feet of View Dynamic Glass for skylights. The New Burke Museum is designed by Olson Kundig, with Skanksa as the general contractor, and will be finished in early 2018.

Eldon Tam, Burke's project director, said the new museum will use the glass “to create a daylight-filled building, while protecting our priceless museum collections from sunlight.”

Tam said the glass will help visitors “see through the Burke.”

“We're trying to connect people to the outside world,” Tam said. “We will be preserving views and allowing sunlight into the museum but protecting the collection.”

Tinianov said he expects the smart glass will become a staple of high-performance buildings in the future, as expectations for work spaces change.

Dynamic glass, he said, will be increasingly used in the same way that smart phones have quickly grown in popularity in the last 10 years.

“The digital skin of a building has become an opportunity for developers and designers to deliver more delightful experiences in a building's environment,” he said.