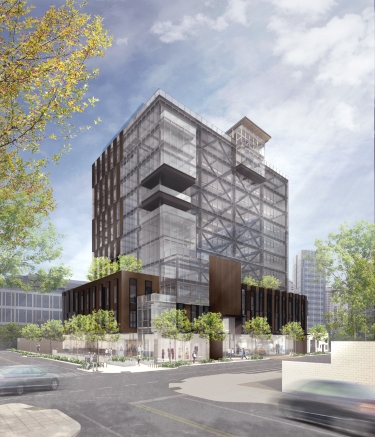 When it comes to saving energy in a building's heating and cooling system, downsizing can be a good thing.

The city of Seattle and state of Washington, in an effort to reduce the energy load created by buildings in the next 15 years, have initiated a new requirement for the way buildings circulate outdoor air.

A new state requirement, which went into effect July 1, states that certain building types — offices, retail, schools, libraries and fire stations — must use dedicated outdoor air systems (DOAS). The change was announced last year and was optional for a year, but became a requirement this month.

“The whole intent of the requirement is to produce energy savings by using a separate ventilation system,” said Michael Frank, director of engineering for McKinstry in Seattle.

Frank said that as states and municipalities look for additional ways to make buildings more energy efficient, they are taking bigger steps toward energy savings.

“We are reaching the end of the easy ways to get at energy savings in buildings, and this version (DOAS) is more drastic,” he said.

The dedicated outdoor air system downsizes the amount of ductwork required in a building, according to Kristina Sing, also a director of engineering with McKinstry in Seattle.

“In a traditional system with a large HVAC handler, you have a large amount of ductwork,” Sing said. “We're going to downsize that. Air is a poor way to transfer energy.”

A chilled beam system, for example, takes advantage of the fact that water can carry more energy than air. The chilled beam system passes water in pipes through a heat exchanger and the cool air naturally descends into a building's work spaces.

McKinstry has used the chilled beam system on high rises, along with a dedicated outdoor air system, which Frank said is “a critical driver for a building's energy savings.” 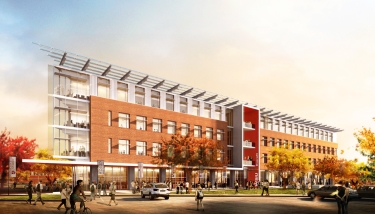 Image from McKinstry [enlarge]
Washington State University’s new academic building in Everett, targeting LEED gold, has air louvers/dampers to automate the circulation of outside air to the indoors. The team includes Hoffman Construction and SRG.

In addition to being required for new buildings, the dedicated outdoor air system will also be required for substantial alterations to existing buildings.

The dedicated outdoor air system “puts heating and cooling where you need it,” Sing said, “and it doesn't over-cool or over-heat.”

Garrett Smith, an engineer in training and LEED Green Associate with FSi Consulting Engineers in Seattle, said the DOAS system has several benefits.

“Duct sizes can be dramatically reduced by using DOAS due to the reduced amounts of air being supplied from central air systems,” Smith said. “Ventilation requirements can be controlled on a space-to-space basis rather than ventilating spaces using traditional variable air volume critical zone systems requirements, which takes the worst-case room and mixes ventilation air per its requirements.

“By using DOAS ventilation,” he added, “air can be supplied directly to rooms, saving both fan power and heating/cooling energy.”

The new requirement will mean that mechanical engineering teams will need to work more closely with architects and electrical engineers earlier in the design process, Frank said.

“The traditional way of going into the permitting process was disjointed,” Frank said, referring to the system of applying for permits. “To achieve better building energy performance, everyone has to be more aligned and coordinated.”

He said the new requirement will take a lot of coordination.

“That is something that is going to be a big change for designers and engineers,” he said. “It's going to be a bit of an eye-opener for architects. It will be a lot more of a collaborative effort than it used to be.”

The new requirement is part of the state Legislature's 2015 energy code revision that sets a goal of achieving a 70 percent reduction in annual net energy consumption compared to the 2006 state energy code.

Frank said that clients with whom McKinstry has worked with have been receptive to the code changes. “The code is migrating toward a performance-based outcome,” he said, “and we are on that path.”

“We have already seen six-plus months of this design in Seattle and I think the industry has responded very well,” Smith said. “Manufacturers and product reps have been prepared for these changes in the region and have responded by giving many technical seminars and educating the design community.”