Want to check on that concrete slab you just poured? Now there's a smart phone app 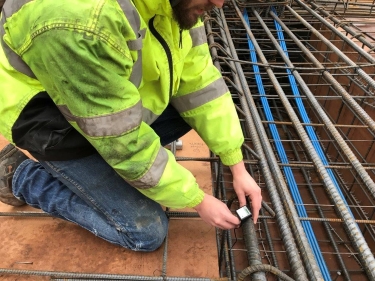 Photo courtesy of Stoneway Concrete [enlarge]
Giatec Scientific’s 2-by-2-inch sensors can be placed in concrete to send information about its strength and temperature in real time. A smartphone app can read the data.

On a job site, time is money and so delays can be costly. But what if making a small change could shave days off your schedule — and save big bucks?

That's a premise behind a product called Smart Concrete, which allows contractors to get real-time information about the strength and temperature of newly poured concrete as it matures.

Giatec's version uses wireless, 2-by-2-inch battery-powered sensors, which are set into the concrete as it's being placed. The sensors use Bluetooth technology to transmit data that you can read with an Android or iOS smartphone app. The apps draw from data stored in the cloud to analyze the performance of the concrete.

The company suggests embedding one sensor for every 100 cubic yards of concrete.

“We were literally the first to use it in the Seattle market,” McKinnon said.

Smart Concrete paid for itself right away.

McKinnon said after the concrete mat foundation was poured it needed to reach a compressive strength of 4,500 pounds per square inch in seven days so the tower crane could be erected on schedule.

So how did contractors know when the concrete was strong enough?

Typically field technicians cast test cylinders, which are sent to a lab for analysis. But the concrete in the cylinder may not share all the properties with the concrete that's been placed, thanks to variables such as temperature, weather, or improper casting and storage.

The results can take a couple of hours to come back from the lab, delaying work.

“You have people standing around waiting,” McKinnon said.

For the hotel tower, contractors using the embedded sensors knew after just five days the mat foundation would be ready on time. Concrete from the pour sent to a lab for analysis still hadn't achieved the desired strength after nine days.

Using sensors allowed crews to stick to the schedule.

But cost savings isn't the only benefit to using such technology. There's an environmental benefit, too.

Smart Concrete offers a “greater opportunity to select the mix that will perform the best with the least cost and environmental impact,” McKinnon said.

For example, engineers could use the performance data to formulate mixes that use less additional content, he said.

Despite the potential upsides, Smart Concrete and similar products face a couple of hurdles to achieving wider use.

McKinnon said the product adds $1 to $2 per cubic yard for big paving jobs “and considerably more for smaller jobs.”

There's also the issue of contractor acceptance, since the sensors are a departure in more ways than one.

Cylinder testing, despite its common use, doesn't so much measure the strength of the concrete in the structure, but whether the concrete producer batched the right material.

The testing involves the use of a machine that breaks the concrete cylinders. The compressive strength is calculated from the failure load divided by the cross-sectional area resisting the load.

The critique from Giatec, the maker of Smart Concrete, is that this method isn't necessarily accurate.

Giatec's embedded sensors use a different method based on maturity, another well-established testing concept. The sensors measure the internal temperature of the mix (which can heat up from chemical reactions), and estimate the in-place strength of the concrete based on the mix design.

The industry standards and practices group ASTM identifies several limitations of the maturity method, including that it should be supplemented by other strength tests such as breaking cylinders.

Still, Giatec says in a report that the maturity method can “potentially address many immediate challenges facing the concrete industry such as predicting appropriate time for formwork stripping and post-tensioning, especially at low temperatures while the strength development of concrete is hindered; and optimizing concrete mix design and concrete curing conditions.”

McKinnon had trouble coming up with any projects where he wouldn't use Smart Concrete. Indeed, he used it for 40 projects in the last year.

He said Stoneway sought out Giatec after becoming interested in its technology and its potential to improve their efficiency.

“We really like their company philosophy,” he said. “We signed a deal and started implementing their product.”

Giatec CEO Aali Alizadeh said one of the company's key insights was that it made more sense to work with ready-mix suppliers than with general contractors since the suppliers were responsible for the concrete production. The company had been selling a sensor directly to contractors at first.

What's more, suppliers can monetize the performance data for their mixes by marketing it as a value-added solution for contractors.

Sarah McGuire, head of sales for Giatec, said the company has around a half-dozen customers for Smart Concrete, which it started marketing a year ago. Stoneway was the first to bite.

Contractors can be slow to adapt to new technologies, Alizadeh said, so he'll have to spend time educating the market on how the system works.

A company report says the industry prefers the cylinder method “due to the upfront cost of concrete mixture calibration for maturity (calculations), and the lack of expertise for the installation of concrete temperature sensors, data collection and analysis.”

“Changing this industry will take a long time,” Alizadeh said.

McKinnon mainly sees the potential, though.

“It allows the contractor to make better decisions with respect to their schedule, which can eventually save money,” he said.