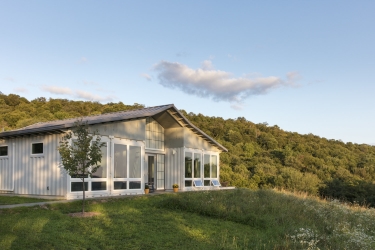 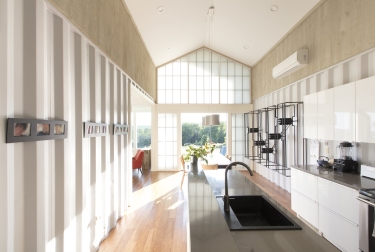 [enlarge]
High space in the middle of the 1,760-square-foot house was built with wood framing and a truss-roof supported by the containers.

Cargo containers, long a staple of international trade, are designed to be affordable, sturdy and water-tight. So it's no surprise that for decades they've been used by the military, the needy — or just the hip — for other uses, including dwellings.

What's new is that the enormous Corten steel boxes are now gaining mainstream popularity as building blocks for affordable homes in a variety of sizes and types.

“When we built our first container home about eight years ago in upstate New York, the locals all laughed and said, ‘What in the world is that?'” said Tim Steele, founder of Steele House, a New York company that designs and builds container structures.

“Now we tend to get a building permit in about a week. As soon as a community gets one, then it's easier to build the next one. In the past 10 years, they've become pretty mainstream as homes, actually,” he said.

The containers' strength and durability explain their appeal, Steele said.

For a two-container house, his company tries to keep the cost in the $100,000 range. “That's a 640-square-foot one bedroom — something that's definitely in the tiny house category,” he said.

John Nafziger and Sarah Strauss, co-founders of the Brooklyn, New York-based architecture and design firm Bigprototype, which has worked with Steele on some container-home projects, say inquiries about designing homes using shipping containers are way up in the last couple years.

“Before, containers were mainly for low-income or disaster-relief housing. Now it's got a lot more stylistic cachet,” Nafziger said.

He calls the homes “great eye candy on the block. It's recycled material, and for people interested in being environmentally conscious, it's a very attractive idea.”

The containers come in standard 20- or 40-foot sizes. They can sell for as little as a few hundred dollars each, so it's not surprising that they have caught the eye of architects and others.

But Strauss points out that many people underestimate the cost of retrofitting a shipping container for use as a home.

“Once you do all the work involved in designing and building a container home that meets building code requirements, the cost is actually about the same as for building a comparable traditional home,” she said, estimating the final cost to be around $150 per square foot.

“It is a metal box. So it presents some serious design challenges in terms of keeping warm in winter and cool in our climate, plus it's humid in this part of the country, so the walls tend to have condensation,” she said. “And as you put in the necessary insulation and do everything else that has to be done, that adds to the cost.”

Other challenges include the fact that, as with a cardboard box, punching out sections of the container weakens its structure, so windows and doors must be carefully planned and adequately reinforced.

And because the containers were meant to withstand marine conditions, they have plywood flooring heavily treated with formaldehyde. The flooring must be removed and replaced to avoid off-gassing once the structure has been insulated and sealed for use as a home, Strauss explained.

Once all that's been accomplished, though, the containers can make for truly comfortable and unique homes.

“The attraction for us was living in a contemporary, light-filled house,” said Terry Maxedon, who shares a 1,760-square-foot home in New York's Catskill Mountains with his wife, Amy Fisch. The house has two bedrooms and two bathrooms, and was built out of four used shipping containers.

“When you tell people about it, everyone thinks you're living in a tin can, but we have tons of windows and a beautiful view,” Fisch said. “And one really great thing is that we can hang things on the wall with magnets in the places where the steel is exposed.”

The house, built by Steele House, is sided with wood and doesn't stand out in the rural community where they live, Maxedon said.

“And it feels great knowing that we have a home that's environmentally friendly and that is just, well, kind of cool and interesting.”