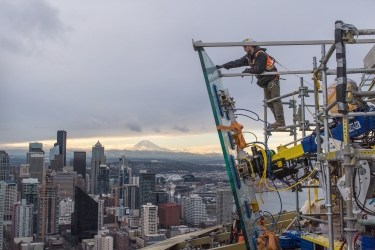 Crews at the Space Needle are installing the last of 48 giant glass panels around the outside of the 520-foot-high observation deck.

The work is part of a $100 million renovation that began last September. The long list of improvements to the 56-year-old structure include updates to its elevators and physical systems, and remodels of the restaurant and observation levels. A big result will be more eye-popping views for visitors.

Hoisting the giant glass panels to the observation deck takes some doing, since they're too big for the Needle's elevators. Each 11-by-7-foot panel is 2.5-inches thick and weighs a hefty 2,300 pounds. A fitted steel shoe adds another 200 pounds.

General contractor Hoffman Construction and its partners devised a unique system to lift the bulky panels into place. It involves remote-controlled drone motors and a robot, which maybe makes the whole thing sound a little more complicated than it is.

The system starts with a gantry crane, which crews installed on the northeast side of the Space Needle to shield the panels from prevailing winds blowing from the southwest.

Once the panels are secured, they're hoisted to the observation deck. The journey takes around four-and-a-half minutes, according to Josh LaSharr, project manager for Herzog Glass, the glass installer.

Along the way, the panels pass by the restaurant and mezzanine levels, where workers with long wands can reach out and nudge the panels just so, moving them into position for their arrival on the observation level.

Contractors had to account for wind gusts that could knock the panels off course, increasing their risk of hitting the Needle and getting damaged. So they built remote-operated thrusters with drone motors that fasten to the corners of the panels and can swing the glass out of harm's way.

Last week, with 34 of the 48 panels in place, the thrusters had been used only three times. At least four more panels have been installed since then.

Once the glass reaches the observation level, it's slotted through a narrow opening in the scaffolding, then transferred to a rolling cart and readied for placement.

A glass-placement robot named Ndulu then takes each panel and carefully maneuvers it into place. The 5,600-pound machine, designed and built for this project by Breedt Production Tooling and Design, moves along a track and is so heavy it had to be assembled on the observation deck.

LaSharr said any parts that would need replacement were purchased off the shelf.

The machine has an arm with eight 20-by-12-inch, vacuum-powered suction cups to secure the panel. Each cup can support up to 800 pounds, leaving plenty of suction power to spare.

Once in position, the panels are held securely in place by stainless steel rods. It takes around two hours to unload the panels from the crane and secure them in their final position, LaSharr said.

The new panels angle outwards and are spaced about 4 inches apart, letting in a breeze. The gap allows equipment for glass cleaning. A wire cage structure that encased the observation deck has been removed, along with a view-blocking pony wall.

Space Needle President and CEO Ron Sevart said in a statement that views will be 35 percent more expansive than the original construction could accommodate.

The total glass incorporated into the project, including a new glass rotating floor for the restaurant, will increase nearly 200 percent compared with when the Needle first opened in 1962. In all, the project will use at least 10 different kinds of glass, totaling more than 176 tons.

Crews have been installing glass soffit panels underneath the restaurant, working atop a 28,000-pound construction platform installed last year.

A scrim that wraps around the platform is due to come down as soon as this week. The platform could be gone by mid-June.

Though work on the observation deck is still in progress, the new-and-improved views will be apparent to visitors the moment the elevator doors slide open, revealing the floor-to-ceiling glass walls overlooking the exterior deck and surrounding city.

Outside, crews will install 24 glass benches around the perimeter, inviting visitors to lean back with their feet off the ground and offering a feeling of weightlessness — and a great spot for a selfie.

Karen Olson, Space Needle's chief marketing officer, said the idea is to update the experience for visitors by offering a “thrilling” view they won't get elsewhere. At her office a couple of blocks away from the 605-foot structure, she demonstrated a virtual-reality version of the new deck, inviting a visitor to try out a glass bench and experience its floating sensation, enhanced by piped-in air simulating an outdoor breeze.

Construction teams are working 20 hours a day, six days a week, incorporating an approach that allows the Space Needle to remain open during renovation. First-phase work, including the observation deck, is slated to finish by June.

The restaurant level remains closed, and a grand circular stairway between the restaurant and observation levels is still being installed. A 100-foot-high events space will remain closed throughout the project. It's being used for construction offices.

Olson Kundig is the architect and Seneca Group is development manager. Tihany Design is working on interiors for the restaurant and lounge.