Budapest's Keleti Station is a grand monument of railroad architecture. Earlier this month it contained a small city of refugees as the refugee crisis in Europe hit headlines around the world.

Thousands of desperate Syrians escaping war at home were camped inside the station, having been passed along from other overwhelmed European nations where they had washed ashore. Without proper documents, they were barred from boarding trains or buses. While leaders tried to sort things out, authorities stopped the trains. No one could board at Keleti.

For several days before they set off en masse to the Austrian border, the exhausted refugees arranged themselves into impromptu districts in Keleti. Mostly young, able men were on the ground level. Families were in the vast interchange below, trying to soothe children and maintain their sanity. One kid had drawn a beautiful airplane.

So Budapest, the Hungarian capital, had its moment of war this month. The actual violence was far away, in Syria, but that wasn't always so. Many people have passed through this station fleeing other wars. In fact, Budapest and Vienna, which anchored the Austro-Hungarian Empire for a half-century, have seen plenty of war up close — ancient, modern and in-between. 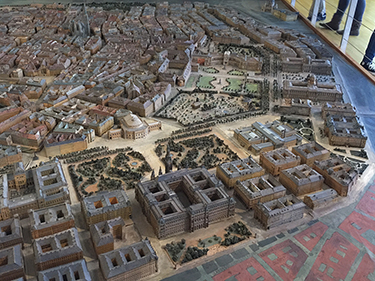 [enlarge]
This city model at the Vienna Museum Karlsplatz shows Ringstrasse under development in the late 19th century. The old city, with St. Stephen’s Cathedral at the center, is in the upper left of the photo, and the tree-lined boulevard that runs through Ringstrasse is on the lower right. Contemporary architects and planners have rediscovered the value of integrating new development into historic fabric of the city.

War today is mostly a political problem. But in these cities it was once also a matter for planners. In fact, modern planning may have started in Vienna in the last century in response to the changing nature of war. Both cities have survived siege and bombardment, civil confrontation, insidious violence and thuggery, lots of marching — and still more bombardment. In war and peace they have exported people and ideas, many escaping violence from their own governments.

Vienna is literally built around military strategy and troop movement. Until the latter half of the 19th century, that city had an expansive open space — the Glacis — that ringed the defensive walls of the old city and separated it from suburbs. The idea was that invaders could be seen and shot easily before they entered the heart of Vienna. The Glacis also happened to be very convenient for troop movement.

The Austrian military charged with protecting the city initially pushed back against losing the Glacis to development.

But a short-lived government upset staged by liberal reformers and intellectuals in 1848 Vienna had changed everything. War was now just as likely to come from within city walls as outside it, and an open-space mote like the Glacis would not tip the balance.

Power was passing to the planners, and modern history was made when Vienna developed the Ringstrasse in the former Glacis. As they filled in the city fabric of Vienna, those stakeholder soldiers got a number of long, straight streets through the former open space, which they could traverse very quickly, without barricades.

The name literally means Ring Street. A grand, tree-lined boulevard arcs around through the center of the horseshoe-shaped Ringstrasse and ties it all together. The boulevard was inaugurated in 1865, and still provides a sense of pride to Austrians now.

But “Ringstrasse” really refers to all the streets, buildings and open spaces laid out in the former Glacis. Culture critic Carl Schorske calls the Ringstrasse “the birth of urban modernism” because planners Camillo Sitte and Otto Wagner (who's now more famous as an architect) conceived it as a way to complete the city, with a harmonious system of city squares and tree-lined streets, focal-point public buildings and institutional clusters.

A grand competition for architects helped determine the final layout for what had been the Glacis, including buildings and open space, and an amalgam of the best entries was adopted. 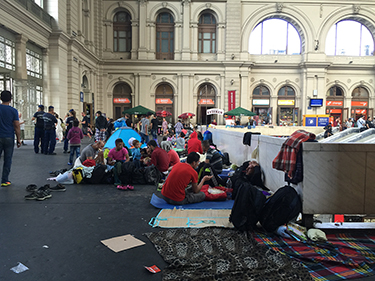 Photos by Clair Enlow [enlarge]
A wave of refugees, most from Syria, made their own city this month in Keleti Station, Budapest.

The boulevard and other streets of Vienna tied in with the lacework of old streets in the center and the new ones in the suburban neighborhoods. Dense apartment blocks for the upwardly mobile were clustered around open spaces.

A large number of important public buildings and apartment houses were there by 1890. The sale of land for apartments financed a string of grand public buildings and institutions. City boundaries expanded to include existing suburbs, and the population of Vienna grew exponentially. The steady pace of redevelopment over the years of Ringstrasse building fueled the rise of an affluent middle class in Vienna, and sealed its cultural and intellectual preeminence at the start of the 20th century.

In the meantime, the two leading planners of that development went their separate ways in design history. Wagner co-founded the Vienna Secession, an institutional movement of artists and architects that played a huge role in the development of modern architecture. They smirked at the eclectic, statue-covered buildings that rose as monuments of the Ringstrasse. Wagner had always advocated a more rectilinear and ultimately more car-friendly approach to laying out city blocks, but Sitte won the day with his more organic and “natural” approach to urban planning, with lots of trees.

The Secessionists may have repudiated the architecture of the Ringstrasse, but not planning itself. Now Sitte is more revered than ever. Modernists — with their embrace of cars, penchant for stand-alone buildings and tendency to leave us with windswept spaces — were not such good city planners.

The Ringstrasse may be grandiose, but it works because the details and the squares are human-scale, and because it fits almost seamlessly around the medieval city.

Now we know that urban planning cannot prevent war. The beautifully reimagined Vienna of the Ringstrasse didn't prevent the collapse of the Austro-Hungarian Empire following WWI, or the rise of fascism and the takeover of Germany in WWII. In fact, WWII sent waves of refugees from Budapest and Vienna around the world.

Other cities — in the U.S. and elsewhere — benefited from their talent and energy.

Maybe the boy with the airplane drawing in Budapest will get to use his talents and energy to draw cities too — somewhere in the world.