New projects in the region have recently opened that exemplify how urban waterfronts are becoming showplaces for sustainable, community-oriented development.

Years of planning and public participation are now paying off, and the visions for truly multipurpose, public-oriented waterfronts are finally becoming a reality. From Tacoma and Bremerton in the South Sound to Bellingham and Port Townsend to the north, efforts to reclaim formerly contaminated and publicly inaccessible sites for new sustainable development are providing a glimpse of how our waterfronts are being transformed to accommodate a wide variety of uses.

With project goals of LEED gold and LEED platinum, new and proposed projects are reclaiming contaminated sites and restoring marine habitat as well as public access and economic vitality to the urban waterfront. 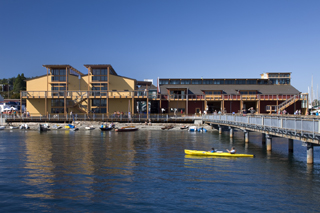 The city of Tacoma has successfully reclaimed and established the Foss Waterway as one of the most diverse urban waterfront redevelopments in the state.

The former Superfund site, which underwent an extensive cleaning and remediation effort, now supports a combination of water-dependent and water-oriented uses such as maritime businesses, educational and recreation facilities, as well as mixed uses such as mid- and high-rise residential, retail, commercial and museums.

The relationship between the city, the Foss Waterway Development Authority and the port ensure that waterfront commerce and water-dependent industry will always have a voice and a strong presence. Yet the incorporation of mixed uses is a step that will help forward the idea that new, high-density uses can be integrated with traditional, water-dependent uses.

These higher-density uses not only ensure that more people can activate and enjoy the waterfront, but the value they bring helps offset the often tremendous costs of environmental cleanup and shoreline restoration.

The Center for Urban Waters, a new 50,000-square-foot environmental lab and research facility that opened last spring, is the first new project on the east side of Tacoma’s Foss Waterway. Designed by Perkins+Will, the three-story, $23 million structure is on target become Tacoma’s first LEED platinum building.

The building houses offices and labs for the city’s Environmental Services science and engineering group, which monitors the long-term health of the Foss Waterway and manages stormwater and runoff throughout the city. The center also houses the University of Washington Environmental Studies group, and the state-sponsored Puget Sound Partnership, which is charged with developing the long-term plan to clean up Puget Sound. 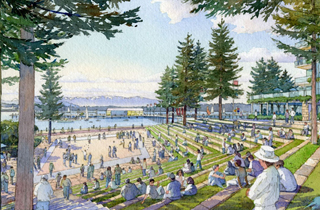 Image by Tim Wells [enlarge]
The proposal for Point Wells, near Edmonds, includes a beach plaza and amphitheater.

The building serves as a hub for research on urban waterfronts, including the study and monitoring of invasive species, water quality and runoff, biotechnology and riparian reclamation.

The building has a myriad of sustainable features, with a goal of achieving “net zero” energy use. Runoff is minimized and filtered with the use of rain gardens, a green roof and ground-level cisterns. These on-site water treatments systems provide up to 50 percent of the water for toilets, and all of the water for irrigation.

The building has a public esplanade with porous pavers that allow water to filter into the earth. In addition, along the waterfront were placed five intact dead trees, or “snags,” designed to attract migratory birds to the shoreline. Other trees were placed in the water, perpendicular to the shoreline, providing habitat for marine mammals and fish.

In Port Townsend, a city known as one of the country’s premier hubs for wooden boats, the Northwest Maritime Center recently made its debut.

Nearly 15 years in the making, the NWMC is the new home for the Wooden Boat Foundation and its annual wooden boat festival, and serves as the center for maritime education and the craft of wooden boats. Designed by the Miller Hull Partnership of Seattle, the two-building, 27,000-square-foot NWMC cost over $12 million and is the first LEED gold building on the Olympic Peninsula.

The project site has a long history of industrial use, and the cleanup involved the removal of over 2,400 tons of contaminated soil. It originally housed a sawmill, and for decades was used as an oil terminal and tank farm.

The buildings themselves are designed to reflect the city’s maritime heritage and turn-of-the-century vernacular. Sustainably harvested woods are used throughout the structure, which has high-vaulted ceilings and lots of natural light. 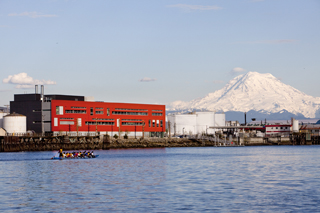 Photo by Jeff Caven [enlarge]
The Center for Urban Waters is on Tacoma’s Foss Waterway, a former Superfund site.

One of the project goals was to provide public space and opportunities to enjoy the shoreline, and 60 percent of the site is open for public enjoyment and access. In addition, a new dock was constructed that provides moorage for large visiting vessels. The building also benefits from the concept of “bringing the outside in” through the extensive use of large barn doors, garage doors and mezzanines that will be open when warm weather permits.

Equally important is the project’s dedication to preserving and restoring shoreline habitat. The new dock features stainless-steel panels that reflect sunlight back into the water, helping migrating and juvenile fish. Over 3,000 square feet of eelgrass was planted in order to provide nursery grounds and protection for fish, shellfish and marine mammals.

A unique, site-specific sustainable feature of the NWMC is the heating. The building is heated using the temperature differential between nearby seawater and ambient air instead of the traditional use of a gas heat pump. Water source heat exchanger plates have been installed under the new pier that use the temperature of Puget Sound to efficiently heat and cool the buildings.

The most ambitious waterfront development currently on the drawing boards is the proposed $1 billion Point Wells project, located on a 61-acre site just north of Richmond Beach. When complete, the development could add up to 4,500 new residents over a 20-year period, more than doubling the population of Richmond Beach.

The developer is BSRE Point Wells, affiliated with Blue Square Real Estate, a major developer of real estate. It is a holding of the Alon Group, a company operating in the real estate, energy and retail sectors. The project team includes Perkins+Will, which, in addition to the Center for Urban Waters, designed Victoria, B.C.’s highly regarded Dockside Green project. The landscape architect is Peter Walker Partners, a Berkeley, Calif.-based firm specializing in sustainable and urban landscape design.

Point Wells is modeled after the Dockside Green project, which was deemed North America’s first LEED platinum neighborhood development. The project site, which is currently inaccessible to the public, has served as an oil tank farm for decades, but has a spectacular shoreline that stretches three quarters of a mile.

An estimated $20 million to $30 million will be needed for the cleanup, which will include substantial shoreline and habitat restoration. The goal for the project is LEED platinum.

Point Wells is within a newly designated Urban Center zone, one of the few high-rise waterfront zones in Washington. Because of the steep bluff behind the site (220 feet high), zoning allows for towers up to 180 feet tall (18 stories).

The master plan calls for the development of three residential villages and a mixed-use commercial and residential “urban village” closer to the uplands. Because of the height of the bluff the project will not be blocking any views.

The anticipated development will occur over a 15- to 20-year period and may include up to 3 million square feet of mixed use buildings. Construction could begin as early as 2016, with completion expected in the early to mid-2030s.

Depending on absorption, construction may average 100 to 200 residential units per year, for a total of 2,827 units. Up to 22 towers ranging from 12-18 stories will be constructed and clustered in three “villages” that will also include mid-rise structures and low-rise townhomes.

Tower heights will undulate and mimic the height variances of the bluff, while heights of buildings adjacent to the waterfront will be much shorter.

The developer has planned a multitude of amenities for residents and guests, including a community center, boardwalk and bike trail, a public transportation hub (including a possible Sounder station), and a large beach plaza and amphitheater. There would also be P-patch opportunities, abundant open space and wetlands.

In addition to the residential towers, Point Wells will also feature approximately 126,000 square feet of commercial and retail space. The goal is that at full buildout the development should function as a self-contained community, with neighborhood uses such as grocery stores, dry cleaners, banks and other services all within walking distance. Point Wells will also offer live-work units and other commercial space.

The site has been contaminated and off limits to the public for most of the last century, so one of the goals of the project is to restore shoreline and wetland areas and public access.

Only about 41 of the 61 acres are actually developable due to shoreline and buffer restrictions. Much of the site will be preserved or maintained as open space.

There will also be a series of “public estuaries” that will help restore acres of wetlands, and a former stream will be daylighted. In addition, water and runoff from the adjacent bluff will be channeled into an aqueduct over the railroad and directed into new wetlands.

Other planned sustainable features include treatment of on-site sewage and the construction of a biomass plant, which will be fueled by agricultural waste that is brought in via train. The overall goal for the site is for a 96 percent carbon emission reduction, going from the current 1,100 tons per year down to only 25 tons per year.

A “whole systems” approach to wastewater management will include water systems that collect rainwater, which will be used for toilets and irrigations. All of these elements have proven successful and positive selling points for the Dockside Green project in Victoria.

Landscape will be heavily influenced by the surrounding flora, with a goal of restoring the shoreline and adjacent riparian corridor to the state it was in over 100 years ago. A boardwalk and adjacent bike trail will be created to help provide a buffer to preserve beach habitat.

Abundant use of native vegetation is expected. In all, the project will be preserving and providing approximately 200 percent of the required open space. The efficient use of building heights and reduction of overall building bulk will maximize public open space.

One of the more challenging aspects of Point Wells will be its impact on Richmond Beach Road, which will be the only point of access from the new development to major roads such as state Route 99 and Interstate 5. To mitigate this, the developers have proposed a transit center that would serve buses, vanpools and Zip cars, and that could also include a new Sounder station, since the site straddles the BNSF railroad. Sound barriers are also being considered to absorb noise from train traffic.

Point Wells is designed as a pedestrian-oriented neighborhood that entices people to walk to on-site amenities and services, relying less on automobiles. Streets will be designed as pedestrian-friendly “woonerfs” that encourage people to use and enjoy them in addition to automobiles. To promote the use of transit and minimize trip generation, the developers are also planning on limiting parking spaces to a ratio of one parking space per unit.

Point Wells represents a grand vision of how we can address our contaminated shoreline sites and reinvent them for public access, habitat restoration and economic vitality by incorporating a mix of uses. Though the project is in the early planning stages, it represents a bold leap forward for our urban waterfronts.

These projects are setting the stage for a transformation in Puget Sound that will continue well into the future, and that will help our cities reclaim their urban shorelines and provide a more sustainable and healthy urban environment.

Scott Surdyke is an urban development consultant and project manager. He has consulted on projects for Tacoma’s Foss Waterway and has managed the development of mid- and high-rise projects in Seattle.