Economists’ retail projections for January — and all of the first quarter — are rooted in the benchmarks created after Black Friday, the infamous annual blitz for discounted giggling Elmos and flat screens. That day’s yield sets a precedent for how consumers, retailers and developers should position themselves for the economic climate of the coming year.

Likewise, another benchmark gauges retail’s economic health year-round: the opening — and closing — of big-box stores. While hundreds of new large-format stores are built each year, hundreds are also vacated.

In a healthy economy, retailers often leave behind a store to build an even bigger one nearby. But in tough times some chains close several stores, like Circuit City’s closing of more than 550 U.S. stores in 2009.

At 150,000 square feet or more, large-format stores are difficult to re-purpose due to their size and massing, and often closed stores become derelict, sitting empty on overgrown lots, setting a precedent for an area’s decline.

As the economy continues to move forward at a lumbering pace, we should all ask: Couldn’t there be a more productive use — and better return — for these abandoned big-box sites and empty structures? What could that look like today ... and 50 years out? 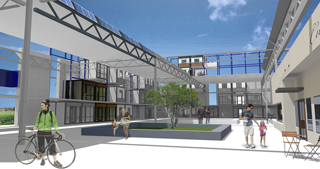 Image by MulvannyG2 [enlarge]
Stores can be carved and opened to form an urban landscape with many uses, connected by open-air pedestrian streets and public courtyards.

To rethink vacant big boxes, now and in the future, we begin by surmising what development patterns will look like 50 years from now and agree that, by 2060, current suburban locations of large-format stores will become urban as density escalates and fills in around them. Also by that time, the heightened demand on resources due to climate change will provide greater incentive for large-format stores’ adaptive reuse — the stores will become too valuable a resource to lie abandoned as many do today.

There are many approaches to redeveloping an empty big box and its site. We suggest a mixed-use strategy, with the financial underpinnings to work.

Of critical importance is to look at this from a developer’s perspective — that is, what type of program would entice consumers (and their credit cards) back to the site? That said, there’s no reason why these sites can’t evolve the same way the fabric of cities has developed historically: slowly, in phases and with multiple users.

Our team of architects and designers has come to think of an abandoned big box as a blank slate, ripe with new possibilities as a destination and as a catalyst for new patterns of urban development: The box can be carved and opened in countless ways to form an urban landscape comprising many uses, connected by open-air pedestrian streets and public courtyards.

Splice it into multiple levels, with multiple tenants and many points of entry that integrates housing, libraries, markets, restaurants and even farming. Because people will rely less on automobiles for getting around in the future, allow a portion of big-box parking lots to crumble and transform back into field.

With fewer people driving cars in 50 years, fewer than half the amount of parking spaces would be allotted. At the same time, we realize that architects framing this solution have to understand how important parking is to a developer or retailer. Architects must be able to show the value in placing it underground or offering less of it.

Our plan also presumes a different, diverse development strategy in the future: What used to be one big box from a tax lot perspective, with a huge, multi-acre parcel belonging to one holding company would be divided into many tax lots for more diversity and a function akin to that of a city. For developers, that means a more vibrant, pedestrian-intense opportunity. For consumers, it means a more interesting place to shop.

There is a caveat to this vision: This shouldn’t be a one-size-fits-all solution. You can’t just put an urban farm in the middle of a shopping mall site. But these are underutilized properties with real estate value. Today and tomorrow there’s a greater obligation to do more.

Darren Schroeder, a senior associate at MulvannyG2, has worked with top Fortune 500 retailers for 15 years, including Target, Nike and Safeway.