What if every single act of design and construction made the world a better place?

With this objective in mind, the International Living Building Institute has created the most advanced system for qualifying sustainability for buildings. When first introduced, there was skepticism, much like initial green building standards from 10 to 15 years ago.

The Living Building financial study indicated that “net zero” could be built affordably with the right team. Within the last five months, the first few Living Buildings have been certified since the program’s inception several years ago by the Cascadia Green Building Council.

The 1,425-square-foot science structure sits on a 3,800-square-foot lot that was once a basketball court. The building is designed to be both net-zero energy and net-zero water. It will generate all its own energy via solar panels with excess feeding into the grid, which the building will draw from at night. All water will be harvested and treated on site, including graywater. 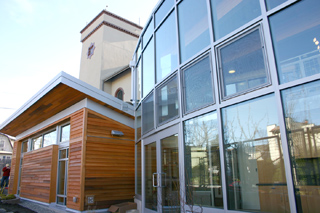 The facility was built by the Restorative Design Collective, which includes KMD Architects, Skanska, GGLO, 2020 Engineers, GeoEngineers, Rushing and many others. The team was founded by KMD Architects in 2009 with the goal of building a Living Building in hopes of raising awareness for the program.

The team selected the Bertschi School because it felt the school was right for a project of this kind — one of its existing buildings was the first in Washington to be certified LEED gold, and the school had an environmental curriculum in place.

The facility’s interior includes a green wall that will help treat graywater, and an ethnobotanical garden that will serve as part of the science curriculum. Students will learn about and grow native plants, including strawberries, huckleberries and others.

All sustainable aspects of the building, including the building’s monitoring equipment, will be visible and accessible by students. An interior and exterior water runnel shows water cycle flow. The students also played a role in designing their new science building.

Unlike some green building standards, the International Living Building Challenge requires actual performance benchmarks. While Bertschi’s science classroom was designed to these standards, it must perform as planned for the next 12 consecutive months before it can be officially certified as a Living Building.

The Living Building Challenge also includes imperatives based on social and site requirements, including urban agriculture and equity. On the whole, buildings must satisfy requirements in seven performance areas, or “petals,” to be considered for certification: site, water, energy, health, materials, equity and beauty.

As the contractor, one of Skanska’s primary challenges with Bertschi School’s new science classroom was the materials component.

The Living Building Challenge seeks to create a successful materials economy that is both socially equitable and nontoxic. Through this approach, the challenge not only advances sustainable building, but to also creates a paradigm shift in the design and construction industry.

While the footprint of the Bertschi science building may be small, being the first building in the region to tackle the Living Building Challenge was a tall order. After five months with a 40-person Restorative Design Collective team engaged in design, construction, product research and sourcing, we are confident the project will achieve certification.

Skanska took the lead in compiling a materials database that will continually be expanded as it is used for similar projects. The work included gathering information on electrical wiring. While copper wiring itself did not contain any of the Challenge’s 14 “red list” materials, the jacketing was a different story.

The project’s electrical team, VECA Electric & Technologies, quickly realized that industry standards have never undergone such scrutiny. The standard jacket on copper conductors is thermoplastic high heat-resistant nylon-coated (THHN), which contains red-listed polyvinyl chloride (PVC). The team conducted extensive research to find a product that did not contain any of the red list materials that was also sourced within 5,000 kilometers, or roughly 3,100 miles, per the Challenge’s requirements.

After several months, the team finally arrived at a product that was acceptable. The team became aware of how standard wiring practices could possibly affect the environment, and also helped educate vendors and manufacturers of coming demand for PVC-free jacketing, which will increase as sustainable construction practices continue to push forward.

A fix for overflows

Another requirement was that no water from the project could be introduced to the local sewer system.

Hermanson Co., the project’s mechanical contractor, not only executed this formidable task, but also created a way to help track, measure and verify that no water was making its way into the city’s sewer system. The team developed a graywater overflow system, which was installed in the restroom and classroom.

The original design intent was for graywater to be deposited into an underground cistern immediately following treatment. However, if the graywater filters ever clogged and the tank overflowed, graywater would flow directly into the closest floor drain and then into the sewer.

Hermanson added an overflow tank with floats that activate a valve, closing off the sewer and triggering a visible alarm light notifying the staff there is a problem. The process provided a long-term solution that would allow the building and the school to never need to rely entirely on the city’s sewer system.

New methods like these show that the Living Building Challenge stands to create a major shift in the built environment. Recall that new practices were required to meet the initial versions of LEED more than 10 years ago.

Many were concerned about the cost of doing such back then. Today, the methods used to execute entry-level LEED projects are considered standard practice, so much so that LEED has evolved to stricter requirements.

Many with a truly long-term view have dreamed of attaining the net-zero goal but have been daunted by the perceived costs of design and construction.

Now, the market has the knowledge to execute in an affordable way and it is starting to have the actual buildings to show for it. The time has come for the next step in the evolution of green building.