The focus of green stormwater infrastructure (GSI) is to mitigate the downstream effects of stormwater runoff in the urban environment. It does this by mimicking effective natural systems — soils, ground plane, etc. — to absorb, delay and clean the water within a natural watershed before it reaches a collecting body of water.

However, GSI strategies have the potential to improve stormwater’s environmental impact upstream as well through lower water usage. This is usually achieved through low-flow plumbing fixtures, or efficient irrigation systems.

Seattle’s drinking water, collected in the Cascade Mountains from the Tolt and Cedar rivers, is sent through drinking water treatment facilities, and then routed to the city in water distribution systems. This means the water we drink is collected 30-40 miles away. Research has shown that the infrastructure needed to move and clean water for city use can actually have a higher overall embodied energy than localized water collection and reuse at the building scale. 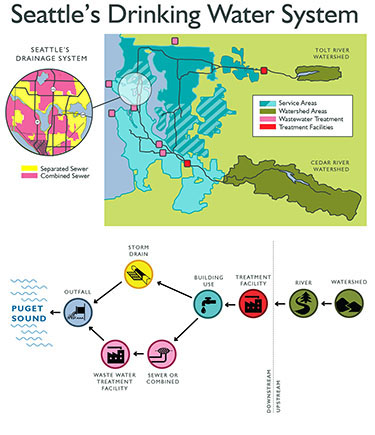 Graphic courtesy Weber Thompson Landscape [enlarge]
Seattle’s drinking water comes from at least 30 miles away. Much of it ends up in Puget Sound via storm drains and sewers.

After water is used, it typically travels through a wastewater treatment facility before it goes to the collecting water body, in Seattle’s case, the Puget Sound. Wastewater treatment is an energy-intensive process, which is unnecessarily overloaded where stormwater and sewer infrastructure are combined, as they are in many areas of Seattle.

Based on research from Urban Greenprint, a local research and advocacy effort developing place-based design guidelines to improve Seattle’s ecological health, evaporation serves a major function in the Northwest’s ecological water cycle. Unfortunately, the reduction of our forests, which dominated Seattle’s predevelopment landscape, has caused the natural water cycle to change. Predevelopment, approximately 49.8 percent of rainfall evaporated from a forested landscape, 50 percent infiltrated into the soil and 0.2 percent was surface runoff.

As a GSI strategy, evaporation has not received much focus, however the ultimate function of evaporation is to remove water from the system, preventing it from runoff or infiltration. Stormwater reuse, through small-scale collection and cisterns at the building scale, is a strategy that can begin to mimic evaporation by removing stormwater from the natural water cycle. This reuse of non-potable water from onsite collection greatly reduces the effort, energy and carbon expended by our potable water infrastructure.

Ideally, we would primarily reuse stormwater that has fallen on a site for all non-potable building water. This would prevent the most amount of water from going through any water treatment facility unnecessarily. In addition to reuse, any measures that prevent water from leaving a site, i.e. evaporation, should also be explored. Combined, these strategies will help restore the function of the ecological water cycle.