But they don’t want that milkshake coming out of their tap at home. They want clean, clear water.

That scenario is similar to what the city of Lynden was facing just a few years ago. A dinosaur of a water treatment plant, coupled with on ongoing drought, had the community and its 13,000 residents facing an uncertain water future.

But it was no easy task getting the plant into operation.

Along with much of Washington, Lynden has suffered through the recent drought years. The city’s main source of water, the Nooksack River, was reported in June 2015 to be at its lowest point since records were first kept in 1966.

The drought and associated low flow in the river leads to the “chocolate milkshake effect” — high water turbidity.

Turbidity is essentially a measure of the amount of solids in the water.

The Nooksack River’s raw water turbidity frequently varies from 60 to 1,500 NTU, a unit used to measure solids in the water. U.S. laws require that public water treatment systems have water at 1 NTU.

A water treatment plant’s job it to take that “thick” water and turn it into drinking water. And it was simply too much for the city’s existing water treatment plant to handle. The 90-year-old plant had serious defects and could not meet peak day demands, forcing the city to rely on storage. Extended peak demand would exhaust the storage capacity, resulting in service disruptions for area homes and businesses. The reliability of the city’s water supply and health of the community depended on the new plant.

The city partnered with Stantec to design a new plant than can treat 8 million gallons of water per day, tripling the volume from the previous facility. Planning for future community growth in Whatcom County, the plant was designed to be easily expandable to treat up to 12 million gallons daily.

Kind to the environment 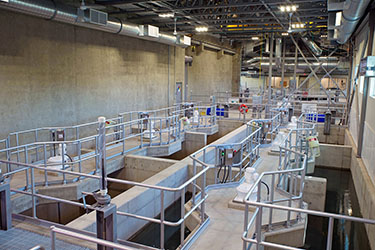 [enlarge]
The plant has some of the latest technologies to improve water quality, such as these flocculation basins that help reduce solids in the water.

The design team and community leaders had a goal of increasing water availability while limiting the environmental impact of the new plant.

• Maximized use of natural light and fully automatic lighting control for energy conservation.

• Multi-tray gravity flow vortex grit removal for the source water from the Nooksack River. The grit can reach up to 10 cubic yards per day during high-turbidity times.

• Reduction in the use of water treatment chemicals, ultraviolet for primary disinfection for giardia and cryptosporidium, and on-site sodium hypochlorite generation.

• Hydraulic gravity flow throughout the plant.

• At 19,000 square feet, the building is compact for its purpose, limiting construction materials.

• A bio-filtration swale was built to the south end of the construction site to treat stormwater, surface runoff and construction dewatering to protect the Nooksack River.

The plant is designed to last decades and environmentally sensitive decisions will multiply in benefits as the years progress. 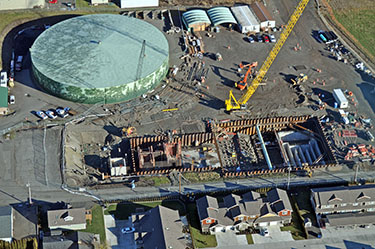 [enlarge]
The new plant, shown here under construction, has a 6 million-gallon water reservoir.

The old water treatment plant certainly stood the test of time. After 90 years, Lynden needed a new facility. But the city couldn’t tackle the full financial burden. And it certainly didn’t want to hand its taxpayers a multi-million dollar tab either.

To stretch those funding dollars as far as possible, the project was put out to bid in the spring of 2013. Sometimes, when a project is bid is critical to its financial success. That was the case with the Lynden plant.

The decision and timing to bid were based on the construction market conditions in early 2013 that were generally favorable to Lynden due to low material pricing and construction demand. There were nine conforming bids, and the closing bid was almost $2 million below the engineer’s estimate.

By September 2015, this complex water treatment plant was completed on time and on budget.

“This is a very special moment in time for me, and I expect that my grandchildren will appreciate this facility long after me,” Lynden Mayor Scott Korthuis said at the plant dedication.

Miles Yi is a senior associate and process engineer for Stantec who worked extensively on the Lynden Water Treatment Plant.