With Passive House, incentives are all carrot and no stick

When I bought my Prius in 2010, the federal tax rebate for hybrid vehicles was a real win-win. The feds got one step closer to their fuel efficiency goals and I got my hands on an uber-efficient vehicle without breaking the bank.

The approach was simple: incentivize the purchase of a superior-performing product.

But imagine if that incentive had been structured differently. What if it depended on user behavior? What if I could be penalized later if my driving habits led to greater-than-modeled fuel use? Too many trips to the mountains? Foot too heavy on the gas pedal?

With the risk of such a penalty, I wouldn’t have purchased the Prius. I doubt others would have either. The risk of that behavior-based penalty would have weakened the incentive’s power to motivate buyers to purchase hybrids, slowing adoption.

The certainty of Prius performance means that policymakers don’t have to impose such a penalty. The fuel efficiency of a 2016 Prius is carefully measured and known (VW cheating notwithstanding), and each Prius that comes off the assembly line will perform essentially identically to the one before it. Regardless of driver behavior, more Priuses means increased fuel economy on aggregate. 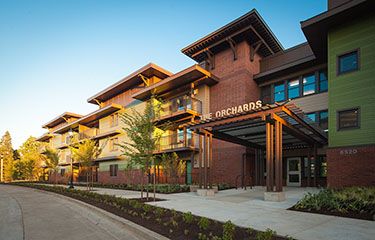 Photo by Casey Braunger [enlarge]
Orchards at Orenco, near Portland, applied lessons learned from phase one to slash the Passive House expense in phase two by more than half. Ankrom Moisan and Walsh Construction led the team.

But that kind of certainty has been lacking for green buildings. Unlike cars, every custom-designed building is a prototype, totally unique. Even for designs that are replicated over and over, each building will vary in orientation, shading, solar access, elevation and construction quality. And frankly, conventional means of predicting building energy performance, even LEED-certified ones, has seemed little better than guesswork at times.

The rational decision for policymakers crafting building efficiency incentives has been to require post-occupancy energy monitoring and to impose penalties when actual performance doesn’t perform up to snuff.

While this approach removes uncertainty for policymakers, it creates it for project owners. The risk of financial penalty is a disincentive.

Passive House design can remove uncertainty for both policymakers and project owners. Its energy modeling is predictive, with modeled results highly correlated with actual energy use. This correlation is thoroughly documented and demonstrated thousands of times over in the U.S., Europe, China and elsewhere.

This certainty means that, like the Prius incentive, we can incentivize better buildings with all carrot and no stick because both policymakers and project owners know that they’ll get superior energy performance at project completion. 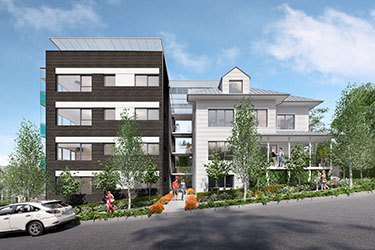 Make no mistake, the stakes are high for getting catalysts for change right.

Most of us recognize that climate change represents a serious threat. We understand that humanity needs to rapidly change the way we use and produce energy. This is why Seattle’s Climate Action Plan calls for net zero greenhouse gas (GHG) emissions by 2050, and King County calls for an 80 percent reduction by the same date.

Real cause for climate hope has emerged recently. The plummeting price of renewable energy, batteries and electric vehicles makes meaningful GHG reductions doable. Financial analysts from Citi, Bloomberg New Energy Finance and Alliance Bernstein argue that because solar, wind and EVs are powered by technology, innovation will continue to drive costs down. This cost shift is causing a fundamental and increasingly disruptive transition away from “business as usual.”

The key question is whether that transition will happen quickly enough to achieve climate security.

Answering this question rests in large part on what we do with our buildings. Buildings consume nearly half of all energy in the U.S., and are responsible for over a third of GHG emissions in King County. Viewed through the lens of climate change, buildings are a problem.

But buildings could readily become part of the solution. Just as cheap renewable energy, batteries and EVs are changing the rules of the climate change game and making climate action practical, so too can Passive House design.

The genius of the Passive House approach is that it views the building itself — its skeleton and skin — as a technology. Innovation can therefore drive down both energy demand and the cost of meeting that demand. Passive House buildings routinely use 90 percent less heating energy than conventional buildings, and up to 75 percent less total energy.

When a project team does its first Passive House building, construction tends to cost a bit more, but the learning curve is short. By the second or third project this cost premium often drops 2-3 percent on multifamily and commercial buildings. When you factor in superior building quality, better comfort, indoor air quality and lower utility bills, this small cost premium leverages a lot of value in terms of higher rents, and lower vacancies and maintenance costs.

Passive House is scalable because it pencils. Other jurisdictions in North America recognize this and have begun to harness Passive House to deliver on both climate action and affordable housing goals, recognizing that low energy bills mean reduced energy poverty for building residents:

• The New York Energy Research and Development Authority made Passive House the centerpiece of its $27 million incentive for building energy efficiency.

• The newly adopted Zero Emissions Building Plan of the city of Vancouver, British Columbia, positions Passive House design and construction as the model for future building in the city. The Vancouver Affordable Housing Authority is a big proponent.

It is time for the Seattle region to reclaim its position of national leadership in green building. The city’s Living Building pilot program is a great step. The next step is to scale up: capitalize on the predictive modeling of Passive House to create a catalyst that is all carrot and no stick, providing policymakers and developers with the certainty they need to make green projects happen and building-as-climate-action to scale.

To this end we are working with Passive House Northwest and others on the 20 by 2020 Building Catalyst, a campaign to reward buildings over 20,000 square feet that achieve 20 EUI (energy use intensity) by the year 2020.