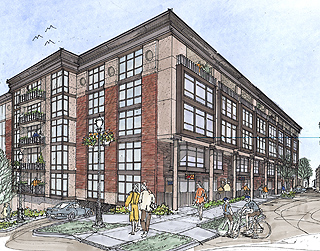 Image courtesy of Belay Architecture
Several developments, including The Roberson on Ledger Square, make the St. Helens neighborhood downtown Tacoma’s fastest growing.
The better part of two decades has passed since the Growth Management Act was passed. It’s taken a long time, but South Sound cities are finally starting to see high-density multifamily housing being built in the urban core.

Even though a way of life in many parts of the country, it appears to be a monumental task in our area to convince people to swap their home in the suburbs for a condo, townhome or apartment and embrace an urban lifestyle that includes less dependence on the automobile. South Sound cities such as Tacoma, Puyallup and Bremerton deserve a pat on the back for encouraging urban residential development as a way to meet the Growth Management Act and revitalize downtown neighborhoods.

The city of Tacoma began implementing in the late 1990s a well thought-out strategy to revitalize a downtown core that was dotted with vacant land, old buildings and a preponderance of low-income housing. With demand for office space lagging, Tacoma’s Economic Development Department turned to residential as a way to jump-start redevelopment efforts. The City Council established a goal of creating 2,010 market-rate residential units in downtown by the year 2010. Bringing an average of 200 new market-rate condos, townhomes and apartments online each year for the next 10 years was a tall order for an area that hadn’t seen new residential development since the 1970s.

The city aggressively moved to attract the attention of market-rate residential developers and identify market demand for high-density housing.

Actions that paid off for the city included:

• Adoption of “Destination Downtown,” an easily understood 14-page zoning code that replaced a 150-plus-page document written in 1953 with multiple amendments.

• Testing the new zoning code by carrying out massing studies for high-density housing developments on five representative sites in the downtown core.

• Consistently delivering construction permits with lightening speed. Several years ago a benchmarking study showed 95 percent of all tenant improvements were issued over the counter the same day of application.

• Taking the leadership role with the state Legislature to enact legislation for multifamily tax exemptions that support high-density housing necessary to meet goals of the Growth Management Act.

• Undertaking a massive marketing campaign to reshape Tacoma’s image as a good place to live and do business and garner positive regional and national press.

• Spearheading the Tour of Urban Living each October to showcase urban living.

• Assembling contaminated property the length of the Thea Foss Waterway, cleaning it up, and selling it to private developers willing to pioneer a new waterfront neighborhood.

Here’s a snapshot of activity in Tacoma’s downtown neighborhoods.

With views of Mount Rainier and Commencement Bay, this urban waterfront neighborhood sports a public esplanade, marinas, dragon boat rowing, the International Glass Museum and the Chihuly Bridge of Glass. Built on either side of the glass museum, the first mixed-use developments of Thea’s Landing and Albers Mill Lofts brought 46 condos, 225 apartments and 15,000 square feet of retail. The Esplanade, now under construction, has 162 condominiums and more than 19,000 square feet of restaurant/retail space.

Beginning at the Pantages Theater, the St. Helens neighborhood is the most established downtown neighborhood and has seen the most pronounced growth with over 1,200 condos and apartments built or in progress. Cascading down the hillside, many homes have views of Commencement Bay and Mount Rainier and are in close proximity to the Theater District, restaurants and shops. Recently renovated buildings make up 20 percent of all new market-rate housing in this neighborhood while all new condos in the Stadium District are apartment conversions.

Current developments on the market include The Vintage Y, The Roberson, Triangle Townhomes, Old City Hall, Hana Heights, The Walker and Metropolitan Apartments. Condo prices in these two neighborhoods show the greatest diversity with new condos in older buildings selling for as little as $138,000 and new luxury condos topping out at $1.5 million.

Recent excitement in the St. Helens neighborhood was sparked with Metropolitan Real Estate Development’s announcement of a 526,000-square-foot mixed-use development that will include an urban grocery store, bank, hotel, condos and apartments. In addition, Williams and Dames, a powerhouse in Portland’s Pearl District, recently bought the Old Elks Building, long an eyesore in the neighborhood. Three more developments on the same block, fronting the Link light-rail, are lined up: a Lorig apartment development, conversion of the infamous Mecca Theater into condos and a restaurant, and a multi-year project by Prium that will build low-income housing, allowing the former Winthrop Hotel to revert to a hotel use with ground floor retail.

The heart of the city has a track record of successful condo conversions in the Cliff Street Lofts and the Perkins Lofts, both with water and mountain views. The University of Washington Tacoma campus has inspired development of The Marcato development (92 condos just finished), the Villaggio (120 apartments under construction) and Court 17 (129 apartments built over a UWT parking structure).

Funky and fun, the Brewery District borders the UWT campus on the west and the south and has territorial views of Mount Rainier and the Tacoma Dome District. Zoning for this area allows residential, office and warehouses. The neighborhood has seen an explosion of residential development with McCarver Village and Gas Lamp Terrace leading the way. Townhome developments now being sold include City Steps, The Galleria, and 23rd and I Street Townhomes. Strong growth continues with 11 residential projects on the boards.

Two other areas worth mentioning are the Tacoma Dome District and Point Ruston. The Dome is readying itself for 250 condominiums to be built near the mass transit hub.

Point Ruston, formerly an Asarco manufacturing site, is an unparalleled waterfront property expected to become a mixed-use development with more than 800 condos, apartments, custom homes, a hotel and retail shops. A shoreline esplanade, pocket parks and significant open space are incorporated into the master plan; the developer is also considering the possibility of a marina.

It’s worth a visit to downtown Tacoma to see what’s happening. We’ll roll out the red carpet while you’re here, just as we do everyday!

J.J. McCament is a partner in McCament & Rogers, a real estate consulting and brokerage firm in downtown Tacoma.