Why developers should check out the burbs 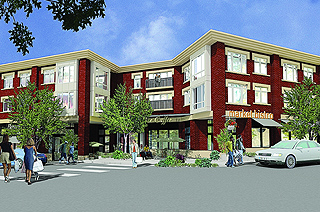 Image courtesy of Lexas Companies
Leland Place, a mix of retail and residential, opens this spring in downtown Kirkland.

It has recently been proclaimed the year of the condo in Seattle, and while the urban-living phenomenon gains momentum, another condominium development trend — suburban living — is gaining considerable traction.

Condos in the burbs? You mean those vanilla venues that commute-weary folks are leaving to move to more vibrant downtown locations? Snicker if you will, but savvy developers know this is no laughing matter.

Condo developments are sprouting up in suburban downtowns across the Puget Sound region, and it shouldn’t be that much of a surprise. With their cheaper land costs, small-town feel and abundant local amenities, these towns are proving to be perfect for residential development.

The popularity of two major mixed-use projects with condos as key components — Burien Town Square and Kenmore Village by the Lake — clearly demonstrates that people are hungry to reside in suburban centers. With so many suburban cities announcing plans to recreate their downtowns with a mix of uses, you can bet that we’ll be seeing more and more condos cropping up in outlying areas.

The reason for this is simple. More people want to be close to the center of the action, whether it’s in larger cities or smaller towns. There are two distinct markets at play here: One group craves the vibrancy of urban living, and the other seeks a similar energy but in a place where they feel more comfortable, in this case, suburbia. The former tends to appeal more to single young professionals and empty nesters, while the latter market tends to appeal to young families and seniors.

Recognizing this duality, Lexas Companies decided to create new residential projects in both markets: Escala, a 30-story mixed-use high-rise in downtown Seattle, and Leland Place, also a mix of retail and residential, in downtown Kirkland.

As one of the Puget Sound region’s most robust suburban condo markets, Kirkland is perhaps better suited for this kind of development than many other communities. Four construction projects — Leland Place, 128 on State, The Boulevard and Market Street Lofts — are under way in and around downtown. Together, they total 288 residences. Add these to five Kirkland conversions, and suddenly the city is looking at some 800 new condos.

And that’s just a start. With the fierce competition for condo development sites in Kirkland, we’re guaranteed to see more development down the road.

So what makes Kirkland so popular? What does downtown Kirkland have that will point the way to the next suburban condo development hotspot? In one word: character.

Head to this downtown on a weekend morning, and you’ll see the buzz. Sidewalk cafes are teeming. Bicyclists glide by on the waterfront path. Couples, families, walkers and shoppers stroll the streets. With its unique galleries, independent shops and numerous chef-owned restaurants, downtown Kirkland is clearly a destination spot for all kinds of people.

When my colleagues and I first visited Kirkland, we sensed that we had stumbled onto something special. Like West Seattle’s Alki Beach neighborhood, downtown Kirkland, with its lakefront location and cool commercial core, is full of vitality and activity. It has a California seaside feel with an invigorating infusion of Cascadia.

Be where the action is

When searching for a building site, we kept in mind that developers who can secure a site in a branded neighborhood greatly increase their chances of success. Fortunately, we found property in the desirable West of Market neighborhood, a community of large, single-family homes, wide streets, expansive water vistas and underground utilities. Located in Kirkland’s original town center, where some of the Eastside’s oldest buildings are found, West of Market is chock full of character. Our condo development, Leland Place, sits on land previously occupied by the historic Leland Hotel, which was destroyed by fire. When building Leland Place, we used some of the original hotel bricks in the Hewitt Architects-designed development.

More important than character — for this or any other suburban condo project — is a downtown location. Because of the human need to interact, it’s paramount that condo developments be located where the action is. And with development sites in Kirkland going fast, you might ask, where else might suburban condos crop up? The answer: Anywhere that three key elements — available land, the right zoning and demand — converge.

I anticipate that, because of the area’s strong job growth and high-quality schools, we’ll continue to see strong condo development on the Eastside, especially in downtown Redmond and downtown Bellevue. Redmond is fortunate to have a wealth of recreational trails offering access to Marymoor Park and Redmond Town Center, and Bellevue, with its excellent transit connections, is dedicated to greatly increasing its downtown population.

There are other suburban communities that are capitalizing on the increasing popularity of condo living, and many more are poised to do so. This is why developers will want to keep their eyes on suburban downtowns as well as urban cores.

Joseph Strobele is president and chief operating officer of Seattle-based Lexas Companies. He is a former senior executive of Legacy Partners, where he led the development of some of the highest profile projects in Seattle, including The Olympus.