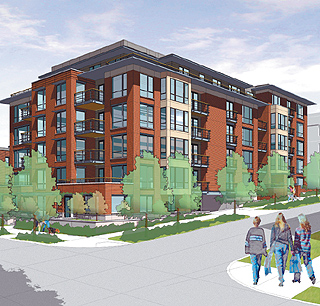 Image courtesy of Lorig Associates
At just five stories, Lorig’s 200 West Highland luxury condo project fits into its upper Queen Anne neighborhood.
With at least 79 new condominium projects completed or in the works in the Seattle city limits, according to http://www.seattlecondoreview.com, buyers can be more discerning than ever. As a result, sellers must focus on distinguishing their projects from others on the market while buyers are encouraged to carefully consider which locations, floorplans and amenities will best match their lifestyles. One of the first choices a buyer must make is between a downtown high-rise and an urban neighborhood mid-rise; two options that offer substantial differences on a variety of levels.

Residential neighborhood covenants have historically restricted building heights in an effort to keep development on a harmonious scale with surrounding buildings. As a result, mid-rise condo developments are built directly into the neighborhood fabric, closely surrounded by pedestrian-friendly environments that include numerous amenities within walking distance. While downtown condo developers in Seattle market a “walkable lifestyle,” the downtown core presently offers few grocery stores, green spaces, schools and other amenities to walk to.

• A sense of community

Mid-rise condos provide the opportunity to be part of a vibrant building community within an equally vibrant, established residential neighborhood. Since many mid-rise buildings offer larger square footages and fewer units, they are more likely to be primary residences and less likely to be rented out. The result is a more intimate and invested community — one in which residents can realistically get to know those they share a building with.

Mid-rises also provide an option for homeowners to downsize while still staying in their current neighborhood. Conversely, downtown high-rise developments typically focus on smaller units and by doing so, create denser communities with fewer permanent residences. Creating a sense of community in a building with 100-plus units can be a challenge, and the height of the building itself sometimes results in a feeling of detachment from the environment of the streets below.

Involving the local community in the early stages of any neighborhood development project is critical to its success. Through regular meetings with community organizations, a healthy and open dialogue with residents can be fostered, creating a forum for communication where needs, expectations and concerns can be voiced and addressed in a timely and thoughtful manner. Not only does this early interaction result in projects that the community welcomes, but it reduces the risk of future project delays often brought on by resistance born from lack of understanding.

Alison Lorig is the project manager for 200 West Highland, a luxury mid-rise in the upper Queen Anne neighborhood located across from Kerry Park.