By DAVID NEIMAN and BRADLEY KHOURI
Special to the Journal

Five years in the making, the update represents a significant philosophical shift in Seattle land-use policy.

Traditionally, Seattle’s neighborhood-scale land-use policies have been developed by a process that resembles a game of Whac-A-Mole: Examples of bad development projects are identified and then highly restrictive codes are crafted in order to discourage repeat performances.

This process also creates a lot of collateral damage, as restrictive codes have a tendency to inhibit good and bad projects alike, and the workarounds that developers invent to subvert the restriction can end up being worse than the original problem.

In developing the update, the City Council, city planners and a coalition of citizen activists forged a very different approach. They identified a positive vision of the kinds of housing the city needs to build, and then created a relatively open, flexible code that offers incentives and bonuses for developers who follow that vision.

Councilmember Sally Clark, who led the effort as chair of the Committee of the Built Environment, described this method as setting out a trail of cookie crumbs. 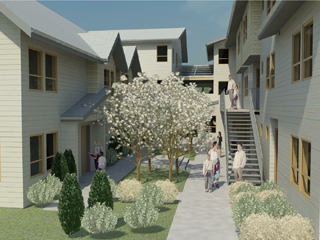 Image by DKA Architecture [enlarge]
Reduced setbacks in the new code allowed First Place Schools to include a courtyard in its Imani Village project.

The new code allows a much broader range of traditional multifamily housing types, including small apartments, row houses, townhouses and cottages. Setbacks have been reduced, allowing more urban building forms than in the past.

Developers are able to choose what type of project to build according to the demands of the marketplace. If they provide specific desirable features such as certified green construction or below-grade parking, they can gain extra flexibility and increased development potential.

For a typical multifamily site, the new code rewards green building performance and certain parking solutions meant to reduce the visual impact of the automobile. Generally, the new code offers similar development potential to the previous code but with greater flexibility.

Developers have the opportunity to create projects better suited to their surroundings and with some increase in density. For those sites located in urban villages, however, the new code is a game changer: Parking requirements and density limits are eliminated, and allowances for extra height and development area have been created.

These increases in development potential are intended to inspire building in areas of the city with strong commercial centers and transit service, encouraging more sustainable, pedestrian-oriented patterns of growth.

Throughout the multifamily zones, the new code is designed to encourage projects of higher quality and wider variety.

While the new code is significantly more flexible than its predecessor, some new controls have been introduced as well.

Streamlined design review is a condensed version of the full public design review process. SDR allows a city planner to serve the role of the design review board. The goal of SDR is to provide a more meaningful public process without subjecting applicants to the extensive cost and time inherent in full design review.

SDR is now mandatory for all townhouse projects of three or more units, putting a project type that has caused neighborhoods a great deal of heartburn under a higher degree of scrutiny.

For projects that do not go through SDR, new design standards have been adopted as a more objective way to control quality. The more subjective process of SDR encourages the design team to create site-specific solutions while design standards attempt to legislate a minimum of quality across all sites.

Both SDR and the design standards are intended to serve as gatekeeping mechanisms to insure that the flexibility of the new code is not abused.

As developers, architects and banks emerge from the economic recession, many wonder what the new code will bring. It is clear that the intention is to encourage a diversity of housing types, each meant to meet different needs and affordability levels.

Row houses, typical of many cities, are now allowed in Seattle. They are often celebrated for their successful blend of an urban streetscape with backyards more typical of dense single-family housing.

Developers looking to build apartments can do so without the strict requirement of providing off-street parking for sites in urban centers and villages. This should create opportunities for new rentals similar to Seattle’s turn-of-the-century apartment buildings.

Key to an evolving Seattle, the new multifamily code puts the city’s neighborhoods in a position to better receive the expected new residents over the coming decades. Elimination of density limits will encourage a variety of housing sizes, types and affordability levels.

The increased height and density, coupled with parking dictated by market demands rather than code, should result in housing designed more around the needs of people, and less around the storage of cars.

While only a few projects have been initiated under the new code, we are already seeing examples that benefit from this more flexible code.

A 16-unit affordable housing project for First Place Schools takes advantage of many new features of the code to create affordable, in-city housing for homeless families. Reduced setbacks allow the housing to form a courtyard at the heart of the project, providing a place for residents to safely interact. Removal of mandatory parking requirements, in this case, meant elimination of all but one of the parking spaces, which in turn created significant savings that could be re-purposed for sustainable design features and amenities for residents.

The inflexibility of the previous code would have made designs like First Place impossible.

More flexibility in parking requirements adopted as part of the code update has already started to create changes in the way townhouses are developed.

Projects under construction at 1801 19th Ave. and 18th and John are providing a mix of units, some designed with parking and some without. Already selling, these projects are creating market comps. As they demonstrate the success of providing units without parking, more projects with reduced parking are likely to follow.

As the code was finalized in the last few weeks of the process, there were still many open concerns about how some of the details would play out in the real world:

• Will the market response to zero parking requirements lead to politically acceptable outcomes?

• Will the economics of small apartments make sense in the low-rise zones?

• Will developers accept mandatory streamlined design review, or will they simply abandon project types that require it?

Acknowledging that inevitably some unanticipated rubber-meets-the-road issues would arise, the City Council has built in a review cycle to take another look at the code once 10 projects have gone through streamlined design review and make adjustments.

Regardless of how the details play out, one thing is abundantly clear: Seattle has undergone a fundamental, generational shift in our land-use politics. Density is no longer a bad word and change is no longer simply a force to be defended against.

Increasingly, Seattle has embraced the idea that cities are places where things are supposed to change, that we need policies to support good development and harness the corresponding economic and cultural vitality for the common good.