New urban technology buildings and campuses are redefining the relationship between the people inside and outside them.

As Gen Y and millennial employees increasingly show a preference for urban environments, many technology and new-media companies that traditionally located in the suburbs are focusing on urban locations — and even urban campuses.

Unlike the suburban campuses that technology companies typically inhabited, urban buildings have an inherent relationship with the sidewalk, the street and all the unaffiliated people passing by. As a result, many urban designers and developers are reinventing a new hybrid urban-technology-office building.

The best designers and developers of urban buildings are realizing that not only do buildings with an interesting and urban ground plane fit better with urban neighborhoods, but this part of the building becomes one of the most visible contributors to the anchor tenant’s brand.

While this has always been true to some extent of urban buildings filled with lawyers and bankers, two things distinguish the program of newer urban technology buildings:

• The culture of the employees in the building is marked by a respect for youth, individualism and authenticity.

• The shifting of and collaboration between workgroups requires large (25,000 square feet to 40,000 square feet) floor plates all the way up the building. 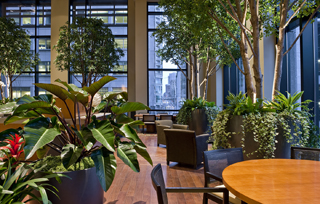 Both of these forces are shaping the ground plane of buildings in our city.

Lobbies such as those at the 1918 Eighth Avenue and West 8th buildings in Seattle’s North CBD are not traditional “pass-through” or “law-firm” lobbies with all hard edges and marble. At 1918, there are comfortable seating spaces designed for collaboration, and West 8th has a sleek, almost hotel-like, lobby that draws in the eye and is remarked on by tenants and passersby alike.

Even the Russell Investments Center — a relatively new building — is renovating its more traditional banking lobby as part of the building’s repositioning.

In addition, developers and tenants are thinking hard about the restaurants and retail in the ground floor of their buildings. While restaurants provide an amenity to the tenants and the neighborhood, they also play a significant role in shaping the building’s brand.

Vulcan Real Estate worked hard to attract Tom Douglas’ brand into the heart of the new Amazon.com campus in South Lake Union, and this is proving to be a success for both the neighborhood and the character of its anchor tenant’s headquarters. 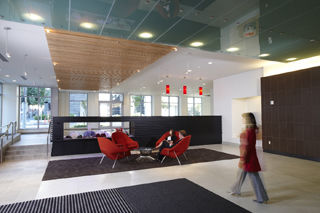 Photo courtesy of Touchstone [enlarge]
At West 8th, the lobby resembles one that could be found in a hotel.

The program requirement of technology and new-media companies for large floor plates was relatively easier to accommodate on large suburban campuses. In an urban environment there are many more constraints in the form of building orientation, access, and block shape and size. Furthermore, large buildings in a suburban campus are consumed visually in a different way: they tend to be seen from farther away, as a whole, and principally by employees.

By contrast, in an urban setting, large floor-plate buildings need to operate at a human and pedestrian scale in the ground plane if they are to fit into their neighborhood. At the pace that a person walks by, this means having many new, different and engaging patterns to look at and connect with. Some people call it “activation,” while others call it “granularity.” Regardless, you know it when it’s not there, and you can’t be bothered to walk down that street.

Perhaps more importantly, the building and its place in the neighborhood becomes a significant contributor to the anchor tenant’s brand in the eyes of everyone passing by on foot. How else to explain the enduring appeal of the Ship Canal buildings? They are relatively small clusters in an out-of-the-way location, but their proximity to the vibe of Fremont makes them enduringly popular with tenants.

One of the early examples of a deliberately pedestrian-scaled street front on a large modern building is the REI Seattle flagship store. It’s no surprise that a retailer led the charge. 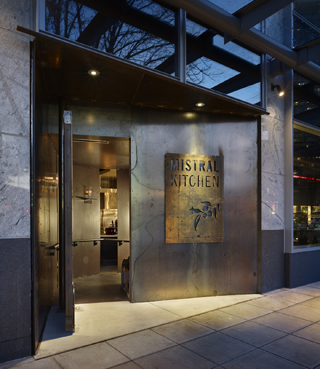 Photo by Ben Benschneider [enlarge]
MistralKitchen at West 8th teases the eye about where the entrance is.

This trend is being replicated in many new buildings across the city: Bellevue City Hall and Sea-Tac Airport both incorporate all kinds of eye candy into the terrazzo underfoot in what are otherwise monolithic indoor spaces; West 8th has brought in the chef-driven MistralKitchen, which teases the eye about where the entrance really is; recent buildings along Westlake have emphasized a strong retail presence; while on the residential side, Harbor as well as Dunn and Hobbes — who appeal to the same demographic — continue to see the value of attracting exceptional retail tenants to their projects.

Dunn and Hobbes’ Agnes Lofts and Piston and Ring building, which includes Plum Bistro and Osteria La Spiga, come to mind, as does Harbor’s Landes Apartments project on First Hill that has a spa, restaurant and dry-cleaner as ground-floor tenants.

The growth in urban campuses among a new set of previously suburban tenants promises to be game-changing for building owners. New urban forms are emerging that are larger in scale than before, but they must present an intensely human face to the street to retain their value. The best new buildings will have a unique, granular and textured identity that is consumed and loved by pedestrians who walk by, and the employees that tenants want to recruit.

That’s good news for innovative developers, as well as everyone else who experiences our city on foot.