Tapping the potential of our alleyways

By DANIEL TOOLE
Perkins + Will

After living in Portland most of my life with a couple stints in Manhattan and Paris, I realized a very valuable asset upon moving to downtown Seattle: the untapped potential of our alleyways.

I had never lived in a city with such spaces and I began to sketch, paint and photograph them as I explored on weekend walks after moving here in the summer of 2008. Eventually, I was fortunate to win the AIA Seattle Emerging Professionals Travel Fellowship in 2010 to study alleys across the country and in Australia and Japan.

I set out to study what other American and Australian cities were doing with their alleys and what we could perhaps learn from the extremely dense and layered forms of urbanism in Japan. I found an incredible amount of information that I hope can successfully inspire further growth in our own unique set of alleyways here in Seattle. 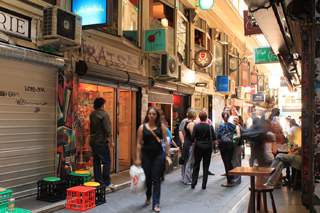 [enlarge]
Centre Place developed as a shortcut through the block across from Melbourne’s Flinders Street Station, becoming one of the most vibrant laneways in the city.

I first traveled to San Francisco, where many alleys serve an active role as public spaces, from the dining-centric Belden Place in the Financial District to the graffiti-embellished alleys of The Mission. The primary area I focused on was the incredibly dense Chinatown neighborhood.

This neighborhood has remodeled 12 of its 30 alleys with new paving, furniture, art, vegetation and stormwater infrastructure since issuing the only alley master plan in the country in the mid-1990s. The alley remodeling and master plan were made possible through work done by a nonprofit, the Chinatown Development Community Center, San Francisco Department of Public Works and many community members.

Action started in the late 1980s, after the community center had local children grade the alleys with report cards on their unsanitary conditions. It later released the reports to the media. Until then, the alleys had been almost entirely neglected by the city and neighborhood residents. They now serve as a unique and highly trafficked set of intimate spaces for retail, residential access and community life.

I then headed east to Chicago, which has the most alleys of any city in the country, with some 1,900 miles of them throughout the downtown. 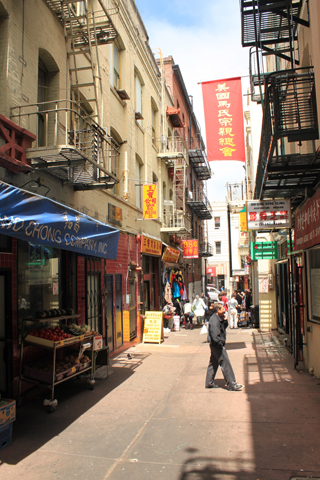 [enlarge]
San Francisco’s Chinatown is the second most dense neighborhood in America, next to Manhattan. Its alleys are rich with history and activity.

Since 2007, the Chicago Department of Transportation has been remodeling alleys around the city into “green alleys.” These alleys are equipped with permeable pavement, high-albedo concrete for minimized urban heat-island effect, and energy-efficient lighting. They also are constructed of recycled paving materials from existing alleys.

These alleys still bear their utilitarian purposes for things like waste conveyance and stormwater runoff, but do so in an environmentally responsible manner.

The city initially funded a few pilot alleys in different soil conditions throughout the city and has now done well over 100 green alleys. Many people are still requesting the greening of alleys due to continual basement flooding with large snow and rain loads. The permeability amends this issue and creates a more functional alleyway.

The first of my trips abroad brought me to the most alley-centric city I have seen.

The city of Melbourne is an incredible collection of alley activities. These alleys — or laneways as they call them Down Under — were not part of the city’s original 1837 grid plan, but are an organic development due to the huge sizes of the 600-foot-long city blocks. People made shortcuts over time between parcels and they became laneways.

These places were neglected and full of crime and filth like many American alleys. But, in the 1980s, the city and Gehl architects of Copenhagen began making improvements to the livability of the city in order to draw residents back into the then recession-blighted downtown. 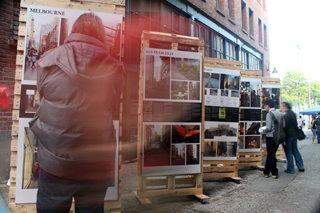 [enlarge]
People browse the Tight Urbanism exhibit in historic Canton Alley during the July 16 Jamfest. The alley, once home to the businesses and workers that first inhabited the International District, is beginning a renaissance of its own.

Public space was at the forefront of their agenda, and rather than being seen as places for garbage, the laneways were treated as a unique form of urban space that needed to be embraced and improved. The city began supporting businesses willing to start shops in alleys and the arts and cultural arm of the city council created the Laneway Commissions, a curated art festival in downtown alleys now running its 11th year.

The city planning department calls these phenomena “micro-cultures” and whole-heartedly embraces them.

Since the laneways and other forms of public space have been at the forefront of Melbourne’s city council, the downtown has seen an immense population growth that continues to climb today.

The laneways have become such a signature part of Melbourne’s downtown that new developments actually create contemporary laneways, which are a nice gesture but never seem to match the quality of the historic spaces that make this city one of the most unique grids I’ve experienced. 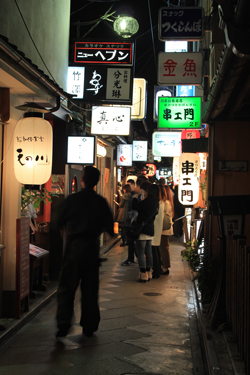 [enlarge]
For hundreds of years, the extremely narrow and over half-mile-long Pontocho has been one of the most popular nighttime entertainment streets in Kyoto.

The final trip in this adventure took me through the tight roji, or alleys, of Japan. These tiny streets are more pedestrian paths than alleys and are hundreds of years old in many cases.

The amount of activity in tiny spaces off these streets was astounding. In certain wards of Tokyo such as Shinjuku, you can find hundreds of slender buildings with multiple floors full of restaurants, bars, amusement halls, and clubs with two levels underground — all unified by an elevator and jam-packed throughout the week.

The population density there supports this incredible tight-packed urbanism that is a bit of a dream here in our American cities like Seattle.

After studying Tokyo’s dense modernity, I headed to Kyoto to see some of the oldest roji in the country. Here, tiny streets in the ancient Japanese capital, such as the Pontocho, contain beautifully crafted wooden buildings off ornately paved and barely 10-foot-wide spaces. Restaurants, shops, hotels, markets and shrines are all accessed by these intimate paths.

American cities can learn from this rich tradition of space efficiency, mixing uses vertically off small streets, and the infrastructural and architectural detailing found throughout these tiny spaces of Japan.

Seattle is poised to be a fantastic example of an alley renaissance. The last few years have seen a rising interest in the downtown alleys by a number of groups.

Todd Vogel of the International Sustainability Institute has brought a lively new alley culture through the fantastic Nord Alley parties and is working with a handful of other Pioneer Square alleys to create a neighborhood network of culture and activities in these often overlooked spaces.

Alleys are coming to the forefront of our urban discussion as people realize that they are a unique part of our city that must be embraced and built upon. 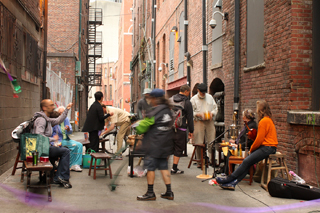 [enlarge]
Seattle’s Firehouse Alley (between Yesler, Washington, First and Alaskan Way) is one of a handful of alleys starting to gain momentum with parties on first Thursdays with hopes to transform Pioneer Square’s alleys into intimate public spaces.

Besides Pioneer Square, the International District has been trying to revitalize its historically rich alleys, such as Canton Alley behind the Wing Luke Museum.

I had the pleasure of exhibiting my findings at the July 16 Jamfest, which brought many people through the alley with music, art and food. Questions were raised and discussed amongst small groups on what could be done with the alley, where early immigrants’ children once played and many families lived in the unique alley-oriented units on either side.

The communities of Columbia City and Mount Vernon are other examples of groups supporting alley art events, and alley-oriented development.

Besides being unique to the city, alleys are a special type of space for improvements. Since they have been considered for so long to be places for vermin and garbage, they are not built into typical city policy when it comes to improvements beyond a right of way.

Communities and individuals need to come together to transform these spaces into places for environmental infrastructure, shops and pedestrian-oriented intimate space that can become an integral part of Seattle urbanism in the years to come.

Daniel Toole, LEED BD+C, Associate AIA, is a designer at Perkins + Will. His mobile exhibit “Tight Urbanism” documenting his studies will be showing in various alleys throughout the rest of the year. You can follow his research and work at alleysofseattle.com. He is traveling to Europe on another fellowship beginning in August.