Real Estate Buzz: From the Great Wheel to alley movie night, Seattle can show how to make better cities

Becoming a great, liveable city is no easy feat. Getting the right levels of density, services, public spaces and other elements takes cooperation between hundreds of planners, developers, architects and others.

Charles R. Wolfe, a veteran Seattle land use attorney, talks about the importance of how people interact with places in his new e-book “Urbanism Without Effort.” The son of a city planner, Wolfe has spent much of his life thinking and writing about cities around the world. His work has appeared in The Atlantic, Huffington Post and Crosscut. Drawing from his travels and his life in Seattle, Wolfe shows the importance of building cities around areas where people naturally congregate.

Wolfe recently sat down with the DJC to talk about his book. Here is the conversation edited for style and length.

Q: What does your book's title mean?

A: Urbanism without effort is what occurs naturally between humans and urban environments. Roads cross, people congregate and they need to feel safe. In some ways it's a free market look at how people congregate, associate, build etc. It's when you find a comfortable, organically occurring situation.

A great example is the alley movie night in Madrona, where my neighbors get together because somebody decided it was a good idea to put a screen up on a wall in a drive way cut. (Urbanism without effort) just happens. You know it when you see it. It's a model for identifying and honoring those fundamental relationships between people and cities.

A: You have to think about a lot of factors, like climate and land limits. The basic answer, and what I am hoping people get out of this book, is that I am encouraging people to act with a little more depth, foresight and hindsight than they usually do. This book was born out of watching the Seattle process, and the dogmatic back and forth we tend to get into, and the politics of land use. This is a plea or an invitation for, as Alex Steffen said in his testimonial, “a renewed commitment to authentic urbanism and an invitation to learn from history as our cities enter a future of unprecedented change.”

Q: How could this influence city planning? 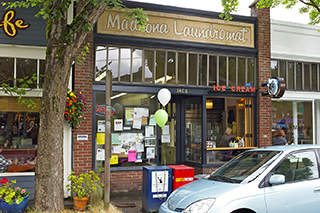 Photos courtesy of Charles Wolfe [enlarge]
In the Madrona neighborhood, a Molly Moon’s Homemade Ice Cream shop shares space with a laundromat, bringing more activity and variety to the street.

It will be case by case. Don't just roundly argue that Proposition X is the right thing to do without understanding human tendencies, without understanding where it has worked and why. Do some real careful planning along the way. Perhaps some of these ideas could be applied to the waterfront.

Before we just take the best and brightest and bring them here, let's think about where we have been and where we are going.

Q: What can developers learn from this?

A: (They can learn) to look at what they are trying to do contextually. Many architects and developers know this stuff already when they present for design review and do marketing. I think the idea is: remember these human fundamentals and don't make the jump to a catchy concept without some foundation.

Remember the rank simplicity between people and place. No matter how sensible in today's terms a proposition may seem, if you don't have the neighbors at least convinced their lives aren't going to be disrupted they are going to make it very difficult.

Q: What do you think about development in Seattle right now?

A: Seattle has a tremendous opportunity as it moves forward with all the exciting developments we have going on like Amazon.com's new headquarters, and Vulcan and Seattle Housing Association's redevelopment of Yesler Terrace. We are ahead of the rest of the country in recovery. This is time to do really exciting things that honor both our uniqueness and our own indigenous ideas, and blend it with the world's best and brightest. 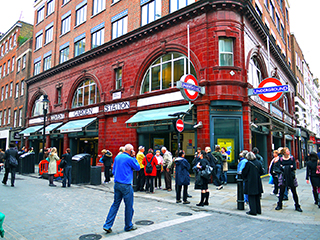 [enlarge]
Streetcorner attractions like this one in London help create public gathering places in a city.

Hal Griffith's Great Wheel is an interesting example. We have cities around the world competing for the biggest Ferris wheel. At some point people decided it was really cool. One of his motivations is to keep up business on the waterfront during tunnel excavations and give people a reason to go down there. Suddenly the Great Wheel became an icon of the waterfront plan, when it wasn't even there when the plan began. Does it honor who we are? It's not just about Seattle trying to keep up with Melbourne and London and everyone else. It's got a unique story to it.

I think sometimes we are just a little insecure here. We are always looking to be validated elsewhere. But people around the world think Seattle is pretty cool, and we don't need to worry about it as much as we do.

Q: Are some old ideas starting to come back into favor?

A: There's a strain of thinking about bringing back concepts people like, like places of confluence. Shareables, generally, are a big trend. Most of us know about Car2go and Uber.

Sharing is something that is really coming back. It's based on the fundamental concept of bartering. These are traditional things people do for one another. They give rides; they share things, and we are starting to permit that again.

Another timeless concept is safety. Evening environments with eyes on the street and good lighting all around makes for a safer environment. The ways streets are used in places like Melbourne — with extensive, seamless street-side dining, appropriate lighting and angle of view — you don't always see it here.

Wolfe's e-book, Urbanism Without Effort can be found here: http://www.urbanismwithouteffort.com/