Several real estate sources have told the DJC that Macy's is selling the top four floors of its eight-story building in downtown Seattle as a “commercial condo interest.”

The sources would not speak for attribution but said Starwood Capital Group of Greenwich, Connecticut, is the buyer. The most likely use is office space for creative firms.

When asked for a comment last week, Jim Sluzewski, Macy's senior vice president of corporate communications, responded: “As we have said in the past, our objective is to make better use of empty/unproductive space on the upper floors of the building.”

He declined to elaborate and Starwood representatives did not return requests for comment.

The top floors of the Macy's building at Third and Pine have 80,000-square-foot floorplates, sources said. One source said it needs big tenants because it would be hard to split a floor for individual tenants.

With more firms wanting “urban campuses,” the upper floors could be just right for a company looking to plant its flag in downtown Seattle. Even just a single floor could create a big presence, one source said.

The space needs a lot of work, and sources said the buyer views it as a “value add” investment.

City records show permits were filed last year to do renovations on the Macy's building. The financially responsible party listed on the records is Paul Brenneke, a Portland developer. It is unclear if Brenneke is involved in the sale of the upper floors, and he did not return requests for comment.

Brenneke and Starwood were partners in a proposed 23-story hotel and condo project at Second and Pine, just west of Macy's parking garage.

Equity Residential eventually bought the land, and is building a 40-story apartment tower.

Facebook took a long look at the Macy's space, sources said, but later decided on a lease at Dexter Station in South Lake Union.

Sources said a deal between Facebook and Macy's simply took too long to materialize. Facebook is growing here and needs space fast. Ultimately, it was easier to take new space rather than tackle an extensive renovation. 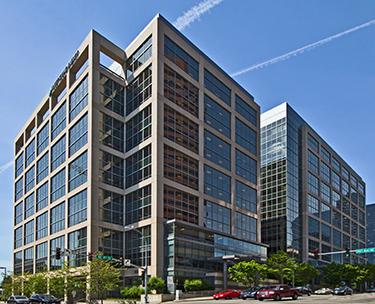 Photo courtesy of Hines [enlarge]
Hines paid $319.8 million, or $610 per square foot, for The Summit in downtown Bellevue, with two buildings and permits for a third.

It's been a busy quarter for people who buy and sell office buildings in the Puget Sound region. More than $1.5 billion in transactions have closed, according to information compiled by Jones Lang LaSalle.

That number is close to the sales value for all of 2014, when $1.6 billion in office properties changed hands, JLL reports.

So far this year, there have been 13 sales of office properties larger than 50,000 square feet.

Downtown Bellevue has been the focal point, accounting for $525 million in sales. Downtown Seattle is next at $347 million, followed by Belltown/Denny Triangle at $295 million, and Lake Union at $164 million.

More than 86 percent of the office sales occurred in urban areas.

Lori Hill, managing director at Jones Lang LaSalle, said the $1.5 billion figure could be a little misleading. Several deals that closed this quarter were agreed to late last year, so they are more of a reflection of the 2014 office market.

Hines was the buyer on two of the three biggest sales so far this year. The international real estate company paid $319.8 million, or $610 per square foot, for The Summit in downtown Bellevue. The Summitt has two buildings with 524,130 square feet and permits for a third.

The biggest sale in Seattle, and the second biggest so far this year, was CBRE Global Investors' acquisition of Metropolitan Park East and West at Howell and Yale streets. The two buildings, collectively known as the “Twin Toasters,” sold for $272.8 million or about $385 per square foot.

Philip Hench, principal at CBRE Global Investors, said Met Park's central location is a big draw. Growth in South Lake Union and downtown makes the Denny Triangle a hot spot. Just to the east is Capitol Hill, a neighborhood favored by young techies that companies are bending over backwards to recruit.

“It's gone from this location of quasi-suburban to being in the epicenter, the bullseye, of all the growth,” Hench said.

Hench said the Met Park buildings are about 95 percent leased.

Facebook, which has space in Metropolitan Park East, recently signed a lease at Dexter Station. Hench said CBRE Global Investors was aware that Facebook was looking elsewhere when it agreed to buy the buildings. Hench said it's possible that Facebook is growing so fast here that it might need to keep the Met Park space in addition to Dexter Station.

CBRE Global Investors is planning to do some upgrades to the Met Park complex. About $10 million will be spent on renovating the retail space, doing cosmetic upgrades and putting in amenities. Hench calls the amenity package “Five-Star Worldwide.” The centerpiece will be a staffed conference room for up to 150 people that all tenants can use.

SkB Architects is designing the project.

CBRE Global Investors also focuses on food service,as well as health and wellness upgrades. Changes to the ground floor retail should take care of the food service aspect, and a 24 Hour Fitness nearby eliminates the need to add a gym.

Hench said Seattle is an “innovation district” — along with San Francisco, parts of Los Angeles and Boston — and said CBRE Global Investors is focused on them.

Hill said the dollar volume for sales this year might be higher than the last couple of years because there are some big properties on the market right now, including Columbia Center in Seattle and One Bellevue Center in Bellevue.

So far this year investors have been buying downtown buildings, but Hill expects to see some suburban buildings and campuses sell later in the year.

Hill expects to see fewer buildings trade hands this year than in years past because Seattle has been such a hot market for office investors and many properties have recently sold.

“The total number of deals that come to market might be less just because of how much was on the market last year and the year before,” Hill said.

But things could change. There are a lot of investors and lenders eager to be in Seattle, and he said they might make offers that owners can't refuse.