With two big apartment projects under construction here, Lennar Multifamily Communities has planted a flag in the Seattle area.

Lennar started a 389-unit complex in West Seattle in January, and last week began excavation on a 344-unit apartment project in Issaquah.

Lennar Multifamily Communities is a subsidiary of Miami-based Lennar, one of the largest homebuilders in the country. The company got into apartments four years ago, and wanted to make a big splash. Seattle is one of its top markets.

Brad Reisinger, president of Lennar's Northwest Division, answers with one word: jobs. People here are paid well, but many of them — by choice or necessity — are renters. They want to live downtown or in one of Seattle's vibrant neighborhoods, so that's where Lennar wants to build.

“Jobs bring people to Seattle, and the quality of life keeps them here,” Reisinger said.

Lennar's West Seattle project is The Whittaker, and it will have a Whole Foods on the ground floor. It was an ambitious start for the firm here because the project has a number of partners and needed an alley vacation from the city.

“We decided to cut our teeth in the Seattle market with one of the most complex mixed-use projects any of us have been involved with,” said.

Weber Thompson is architect of record, Fuller Sears Architects designed the building, and Chinn Construction is the general contractor.

Atlas in Issaquah will have three five-story buildings at Northwest Gilman Boulevard and Seventh Avenue Northwest, with 450 parking stalls. Excavation began earlier this month and the first units should open by summer 2016. Atlas will be done that fall.

GGLO is the architect and Andersen Construction is the general contractor.

Here's what the company looks for in a project: walkability, access to transit, the number of new apartments nearby and barriers to entry. Few projects check all those boxes, he said, but Atlas does. 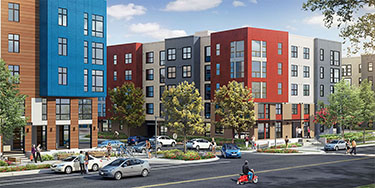 Image courtesy GGLO [enlarge]
Lennar’s 344-unit Atlas is one of the first projects to be built in Issaquah under a new plan to create a more urban area with jobs, housing and transit.

Atlas is the first big apartment project built under the Central Issaquah Plan, which is intended to increase density and create a more urban area with jobs, housing and transit. Few projects have been proposed since the plan was approved and some developers may be waiting until a few more projects go through the process.

Issaquah has one of the state's top school districts. Lennar expects the new units will attract families so it is putting in a number of two-bedroom units.

Lennar is planning four more apartment projects — all in Seattle — with about 705 units.

The next one to come out of the ground will likely be Twenty-20 Mad at 2020 E. Madison St. Several developers have taken a run at this site, which has some contamination issues. Lennar is proposing to build 157 units on a portion of the site that is clean.

Reisinger said people want to live on Capitol Hill and be close to Interstate 90.

“There's a lot of demand for Capitol Hill housing from people who work on the Eastside,” Reisinger said, “and there hasn't been a ton of new supply on the east side of Capitol Hill.”

Construction should begin in the second quarter. Encore Architects is designing the project, and Lennar is negotiating with a general contractor.

Lennar is also big on Ballard. It recently started planning The Valdok, a 178-unit project at 1701 N.W. 56th St. It is named for one of the former property owners, whose family owned it for a long time. Lennar assembled six parcels from five different sellers for the complex. Construction should begin in the first quarter of 2016.

Reisinger said Lennar is not put off by all the new units in Ballard. The Valdok is just getting started and he thinks most of the new buildings will be full by the time his opens.

Ballard attracts developers for a simple reason, Reisinger said: People want to live there. “People live where they want to spend their weekends, and you can't beat Ballard for that.” 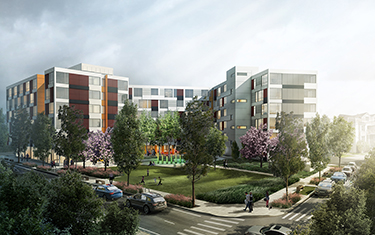 Clark Design Group is the architect for The Valdok. Lennar has not picked a general contractor.

Interbay is an intriguing spot for Lennar thanks to its proximity to Ballard, downtown and other desirable neighborhoods. Lennar is planning a 220-unit project at 3230 16th Ave. W. Reisinger said two new Interbay complexes — Slate and Interbay Flats — are leasing up well and that's encouraging.

Interbay doesn't have the restaurant and bar scene found in other neighborhoods, but it's close to running and biking trails, and other recreational activities. People are starting to think of Interbay as a place to live, Reisinger said.

Construction is expected to begin on this project in the first quarter of 2016. Encore Architects is designing it.

Lennar also wants to do more in West Seattle, and has started early planning on about 150 units at 2501 Harbor Ave. S.W. Despite some of the challenges of The Whittaker, Lennar made a lot of great connections in West Seattle. From residents to business groups, Reisinger said everyone takes pride in that neighborhood.

Lennar hasn't picked a start date, but mid-2016 is possible.

When Lennar decided to bet big on Seattle, the company looked for people who knew the market. Reisinger says he's a “Seattle guy,” born and raised on a farm in Adna, just outside of Chehalis.

After graduating from Adna High School, he attended West Point and then served as an Army Ranger. He later enrolled at Northwestern University's Kellogg School of Management and got an MBA, before going to work at Jones Lang LaSalle putting together agreements between federal agencies and private developers.

He represented the Army in privatizing housing at Fort Benning in Georgia, Schofield Barracks in Hawaii and West Point, three installations where he served during his Army years. Reisinger was fascinated by development and went to work for Pinnacle in 2007, managing projects on the East Coast.

In November 2013, Lennar tapped Reisinger to lead its push into the Northwest. In addition to Seattle, he is responsible for finding projects in Portland.